I woke up today for the Aspen to Millie ride, in a daze I started to search around for my bike gear that had been tossed on the ground from yesterday's ride. During my commute to work, I managed to misplace my prescription sunglasses (essential piece of gear when flying down Lemmon at 40+ mph). After looking for about 20 minutes, I decided that I probably left them at work during my bike commute. Bummer. I tossed in some contact lenses and glasses, loaded my bike, and grabbed some oatmeal and raisins. No coffee, no sunglasses, this was starting off to be a bad day already.

We shuttled to the top of Mt Lemmon for an all day mountain bike ride "down" Mt Lemmon. Things slowly got better as we started on Aspen Draw, dodging pine trees and streams. This is the Arizona that I will come to love this summer, escaping to Mt Lemmon is going to be a common weekend occurrence this summer I have decided.

We started at Aspen Draw on some semi-technical trail and ended up tossing in the towel after Bugs Springs, partly due to mechanicals and flats and partly do to a lackluster motivation to continue. A gatorade and fudge stop also was a major culprit in the decision to bail rather than continuing down the relentless technical Prison and Milagrosa trails. Frankly, I could have done Prison but I (nor my front shock/bike) was not ready to do Millie.

Those that are unfamiliar with this network of trails, take my word when I say this is one of the best, technical rides in Arizona. The route is also part of the Climb or Die (Scott's idea) challenge that Scott and I have been trying ton conquer. During today's ride, we managed to only cover 29 miles over the course of the 6 hour trip. Honestly, it may be easier for me to ascend this mountain than to descend it.

A shot looking down at Bug Springs, south toward Tucson. 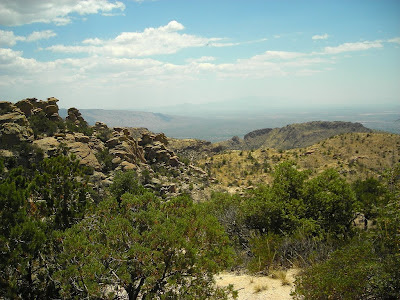 I think we all took our spills pretty well, especially Steve, who not only ate it twice, he managed to break his new ultimate Avid Juicy hydraulic (which retail for $500) while taking a spill on Bugs. Surprisingly, I had no flats or mechanicals today, although everyone else at one time either had a flat, mechanical, or both.

Looking forward to some the Coconino Dirty Century in Flagstaff on Saturday and some reconning around the Tortolitas...


Max and Vern, thanks for the beverages. Thanks again to Cat for the shuttle ride and congrats again on graduating!

Hi. Please join the Bicycle to Work! LinkedIn networking group. Members pledge that they will try to ride their bicycle to work or on an errand at least once a week. Although the benefits should be obvious, let me outline them here.

Right now people in the industrialized world are facing two very grave problems: obesity and a growing scarcity of oil. Compounding this problem is the new food shortage brought about, in part, by the conversion of food cropland to bio-fuel crop production. Most people feel powerless to help, but there is one thing that we can do. Ride our bicycles to work.

If everyone would agree to ride their bikes to work one day per week we could cut oil consumption by as much as 10-15%. No one would argue that riding a bike burns more calories than driving the car. Although popular politically right now, most bio-fuels consume more energy than they produce. We would be much better to eat those bio-crops then use our own energy to transport us around.

So spread the word. Make it a movement! Bicycle to work one day a week and do your part to cut back obesity and the overuse of oil and precious cropland.

Just go to my profile at http://www.linkedin.com/in/jeffreylstevenson and you can click on the group to be included. While you are there, don't forget to ask to link to my network of more than 9,000,000 like-minded professionals. I accept all invitations and look forward to meeting you.

Chad,
Love reading about your adventures I have been having some back problems so I am so/so right now on the bike. Look at doing the SM100 this year or next. I am doing the IMBA VA bike festival this weekend--70,80s great weather now.