My TT bike has been shipped off today 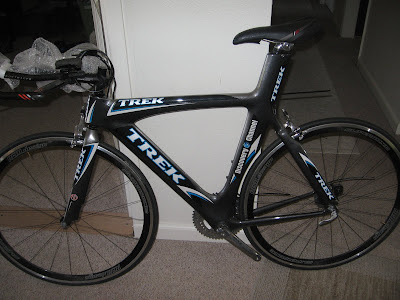 Its departure brings in a new era of mountain biking for me. I originally purchased this bike to compete in an Ironman last year. A bout with an Achilles injury has prevented me from doing an Ironman, along with the shifting of my interests to endurance mountain biking. The AZT 300 Race this year was one of the biggest disappointments I have had in my short biking history... to be held back by equipment rather than will or ability was devastating. I tried to continue on in Reddington (due mostly in part to the encouragement of Max) but was forced to stop due to my saddle causing the worst case of chaffing/soreness I have ever had.

So what now? Well, with the money in my Paypal account, I can now begin the process of purchasing my new bike. I am thinking big wheels and light, most likely either a Lenz or Moots. I rode both at Interbike '07 and fell in love with their geometry.

Additionally, this year's touring adventure needs to be finalized soon, July looks like the best timing for work and the southwest is definitely in the plans, most likely Arizona, Utah and Colorado. I originally was looking at completing the Pacific Coast Highway that I started last August, but now I am thinking about starting close to home and heading north with a pad, sleeping bag, my mt bike and camera. More details soon.

Wow! Can't believe you sold it for an MTB...that's so kick ass.