It looks like Dave has been busy working on his late June bikepacking event. Check out this link. It looks as though the route is going to become an instant classic. The forum for questions is up on bikepacking.net.

This route pieces together 311 miles of the of finest trails and remote terrain of Southern Utah. On June 25th, 8 AM riders will embark from Parowan, UT to begin this self-supported route challenge. The moon is full and the days are long.

What: This is a multi-day self-supported mountain bike race.
When: Friday, June 25 8:00 AM
Where: Near Parowan, UT.
1 comment:

After a quick greasy spoon breakfast at 5am, we set off from Flagstaff to do the Casner Dirty Century Ride. Originally toted as a race for Flagstaffers, I halfheartedly decided to make this a ride. Curiosity prevailed as the date approached for this now rote ride, the new "group" factor could add some new flavor to the ride.

After meeting at Safeway, we drifted through Flagstaff to some forest roads and later, the main attraction: the telephone line to Casner Mountain. It borders wilderness on both sides; ergo as you can imagine the views are unique to northern Arizona. 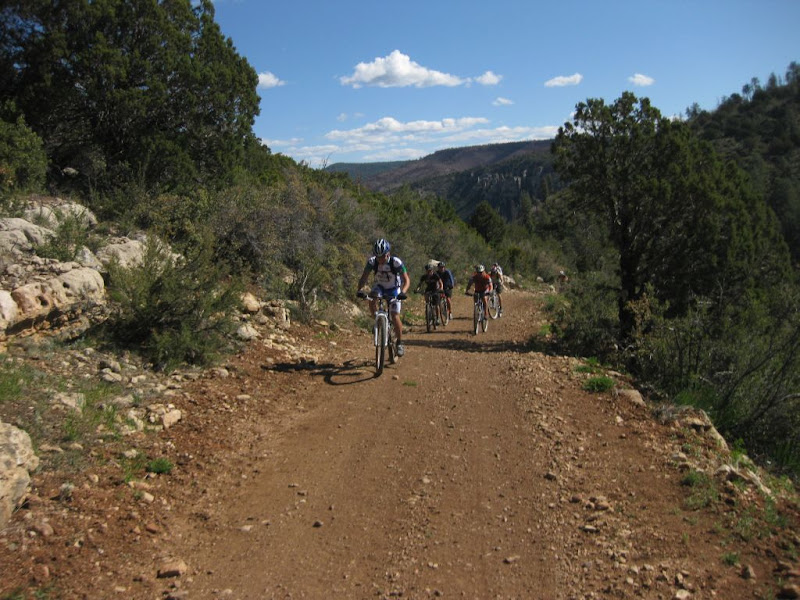 The steep, rocky doubletrack squeezes through the Sycamore Wilderness (show on the left side of this picture) and the Red Rock Wilderness (right side). 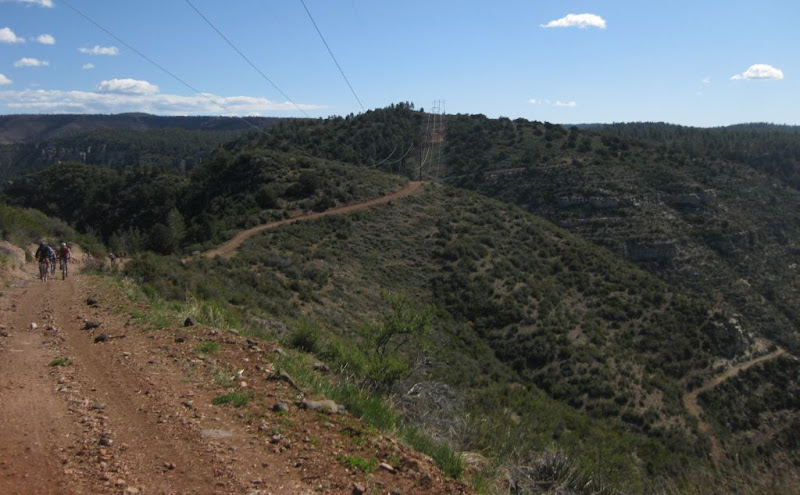 ~25 miles into the ride, the first sings of red rock appeared 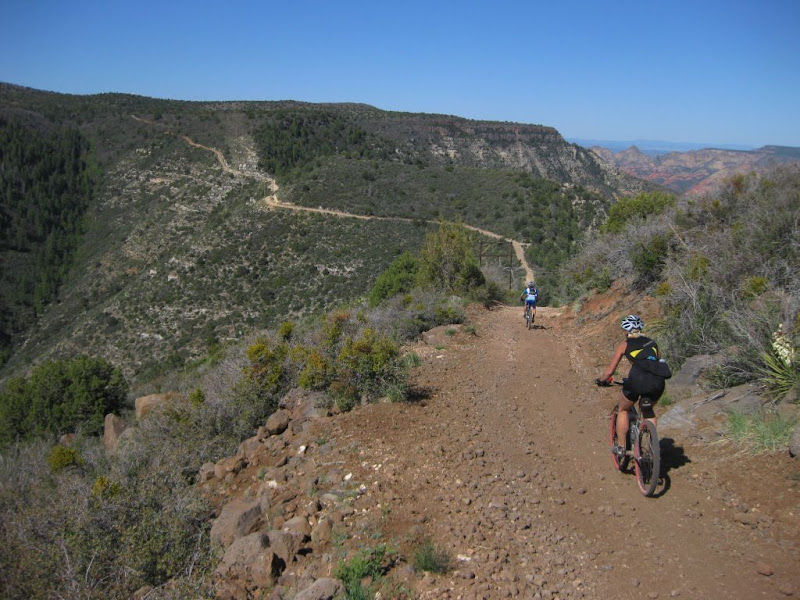 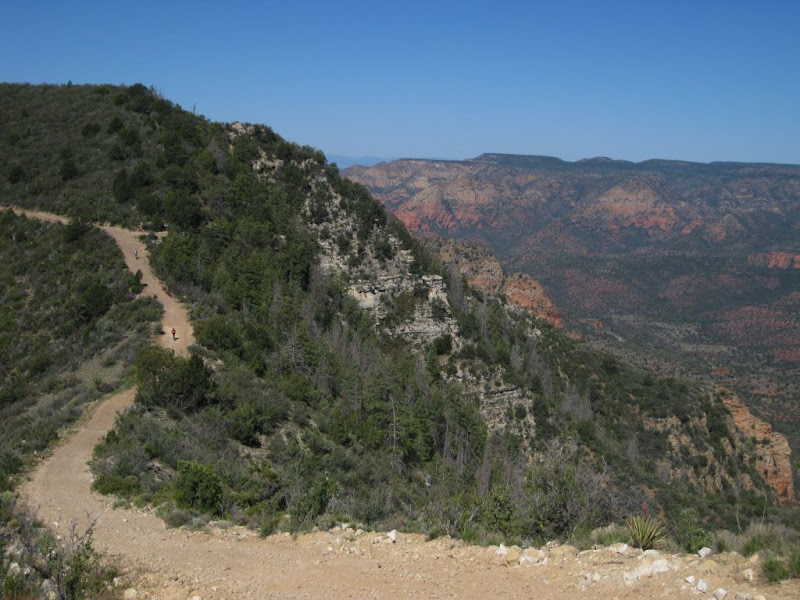 As usual, pictures never really do justice for how steep the ride is. All 13 riders chugged along, some staying a bit longer to take some pictures. 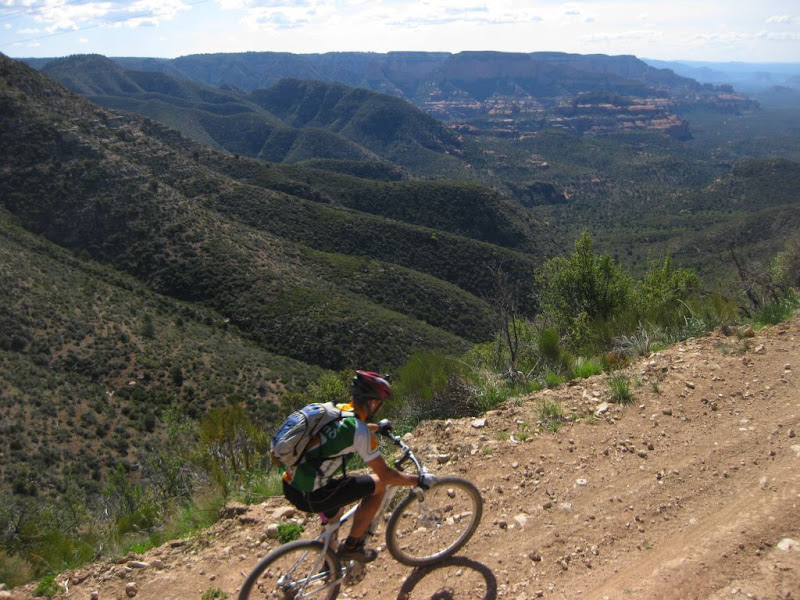 We even fought off a few mechanicals...a broken spoke, seat post, and a flat tire. 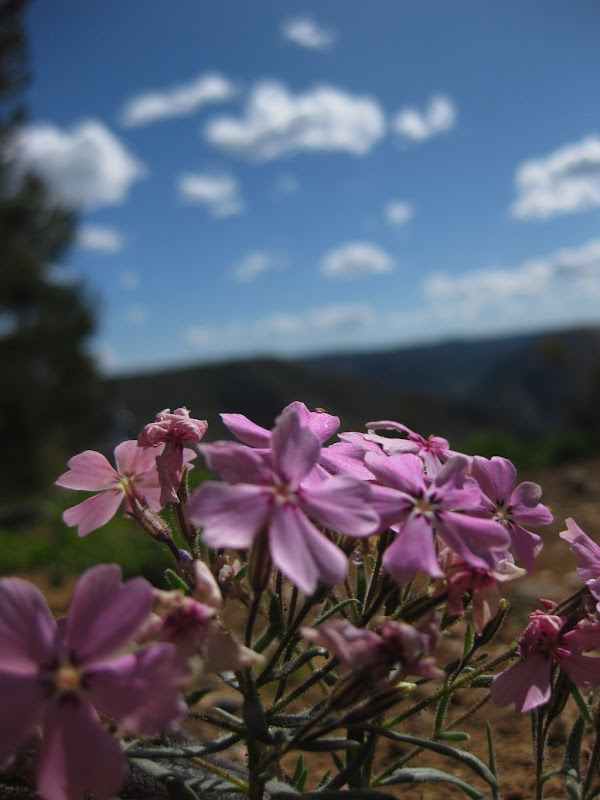 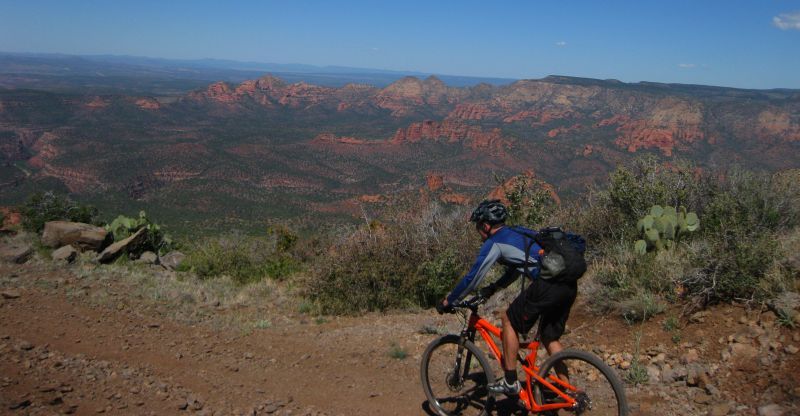 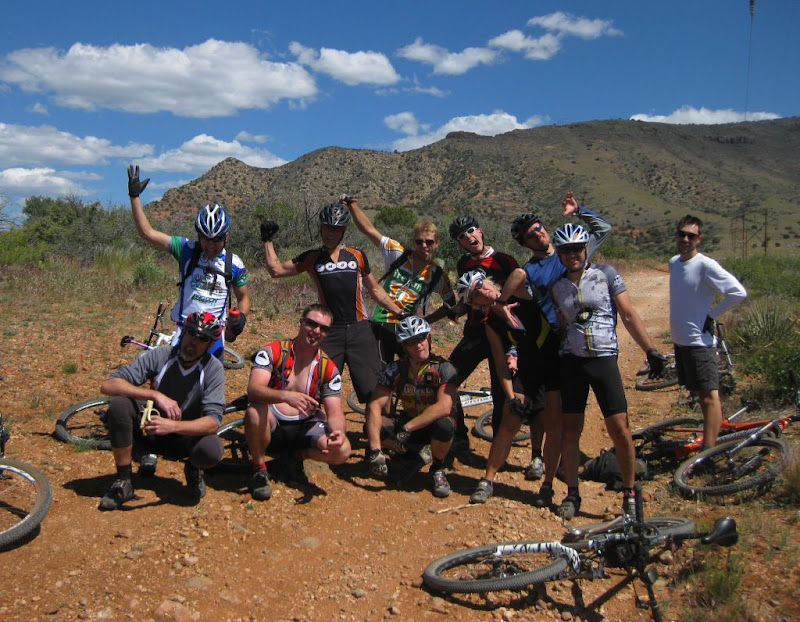 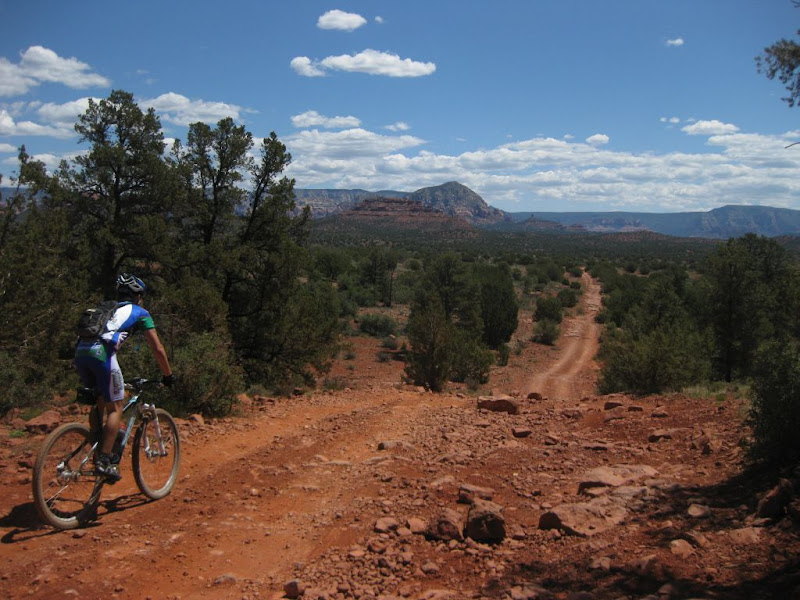 The only section that I had now ridden on this route was a brief 5-mile section between Casner and Dry Creek ST. 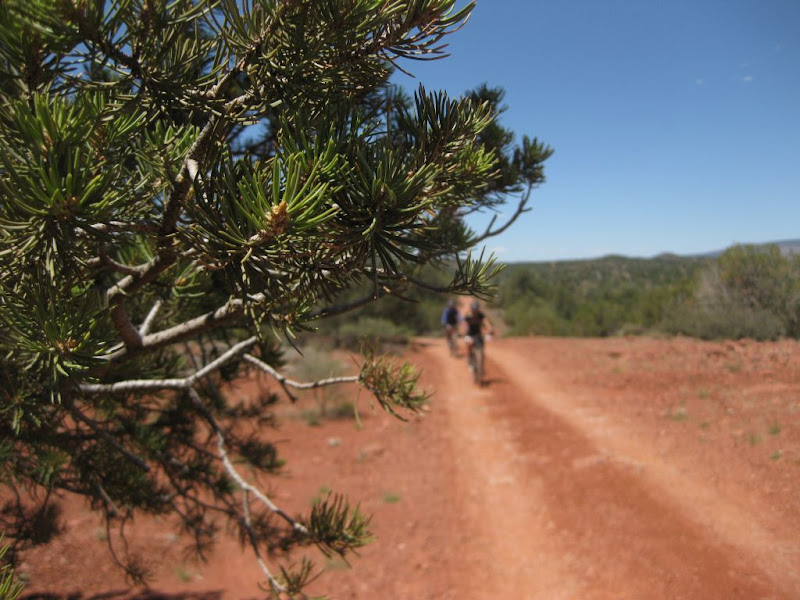 At first, the trail seemed to perfect for a group ride. 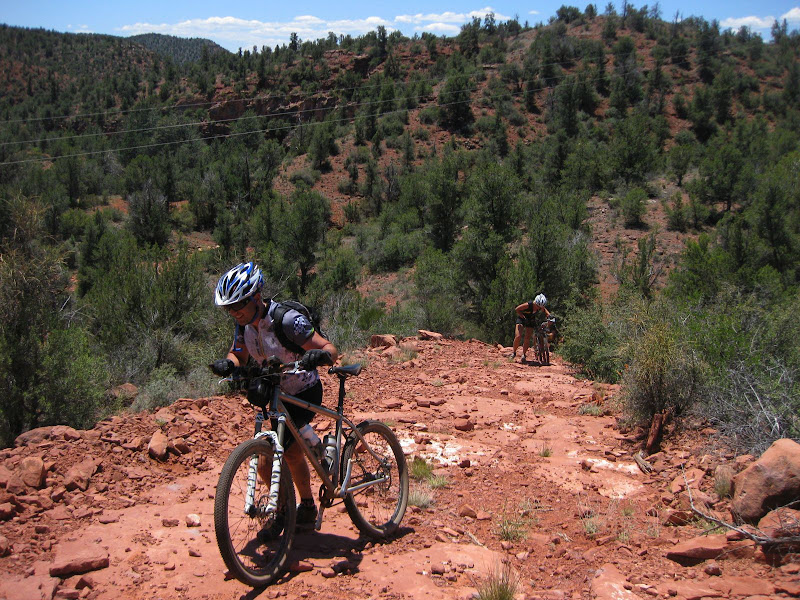 As Jeff called it, the ride quickly became a "death march" in some sections. 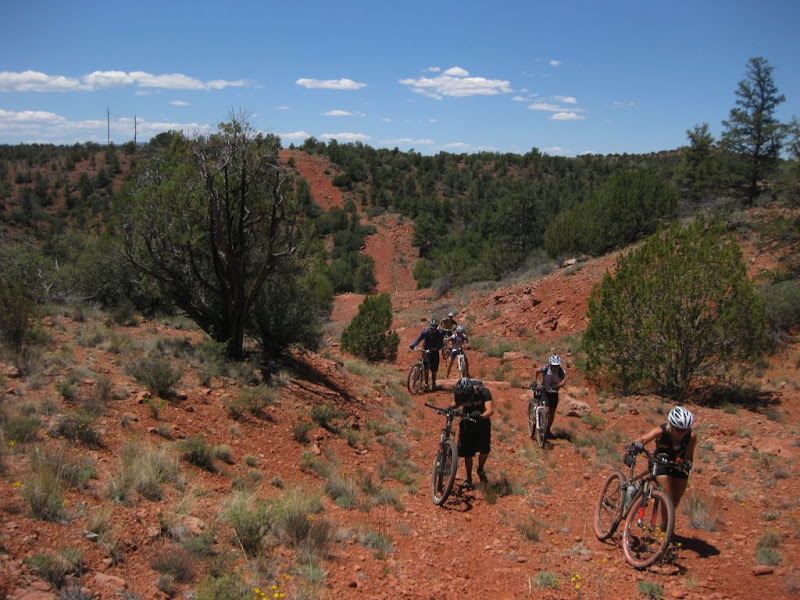 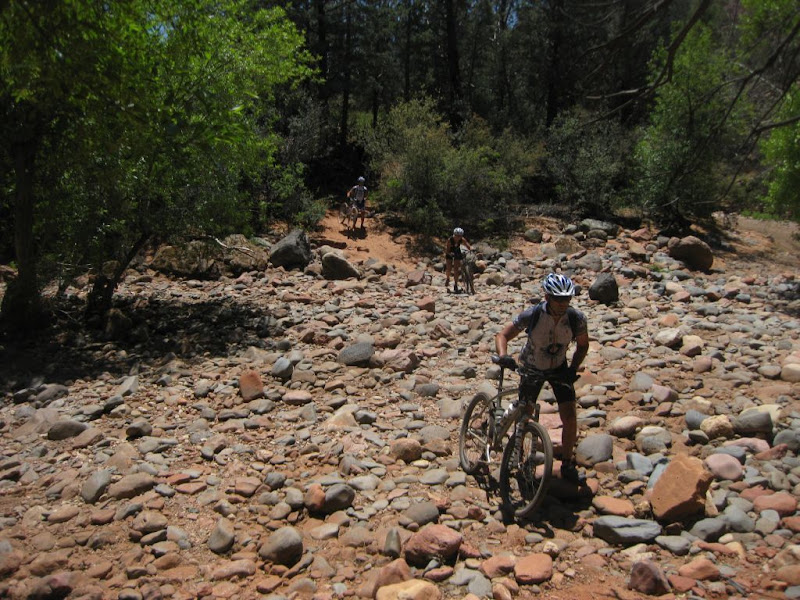 Even the singletrack was too sandy too ride. Here is a section that crossed Dry Creek. 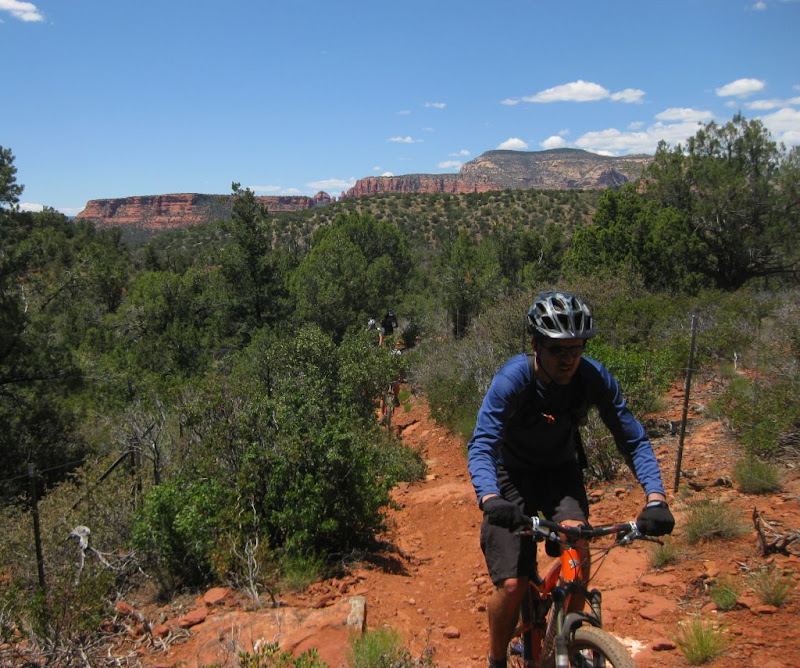 Alas, singletrack in the form of Two Fences TH.

After a quick stint at Burger King (chicken sandwich, fries and Lemonade for me), we headed up to conquer Schnebly. Last year, I skipped the singletrack in favor of the road. I chose the harder, rockier singletrack this year. 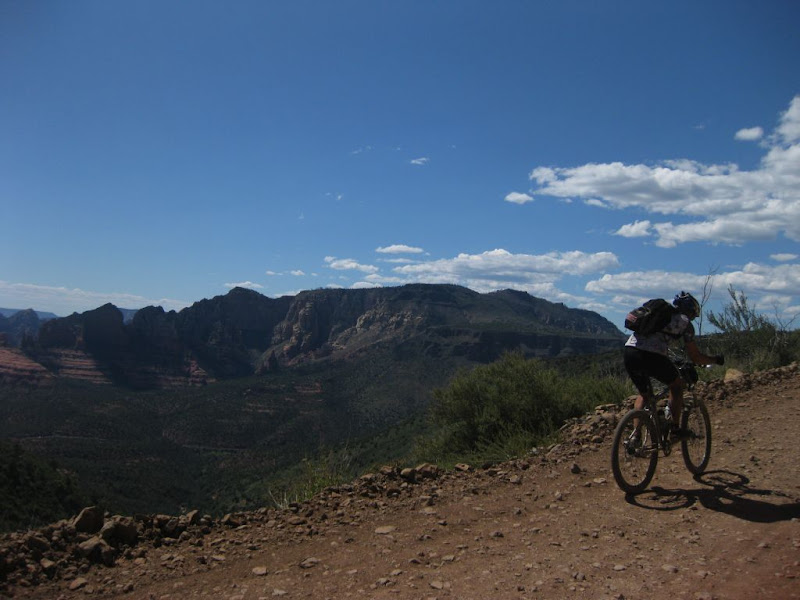 The singletrack put me right behind the singlespeeders (Phil, Nancy, and Jeff). They were cranking up the mountain. Nancy was a climbing fool, I can't believe how fast she was motoring up that mountain. 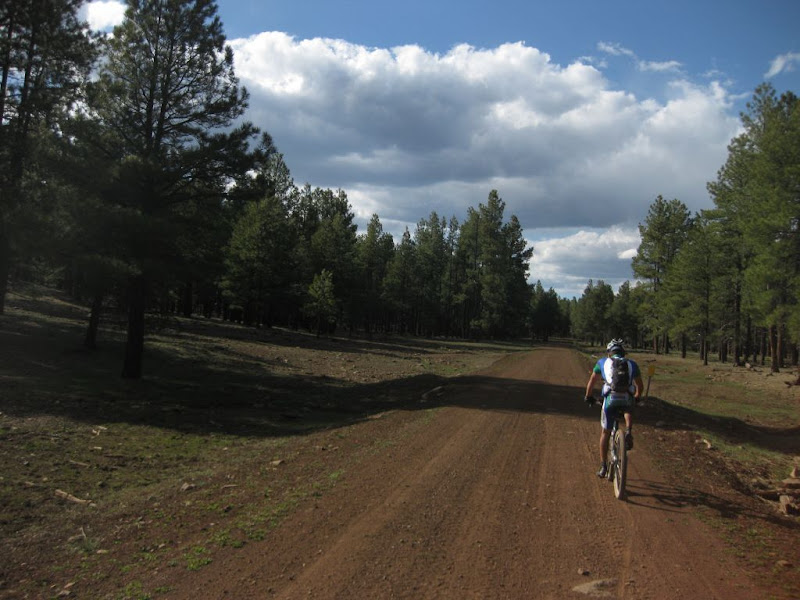 A quick fill up in Woody's at Munds before taking Frog Trail to Iron Springs to Old Munds. 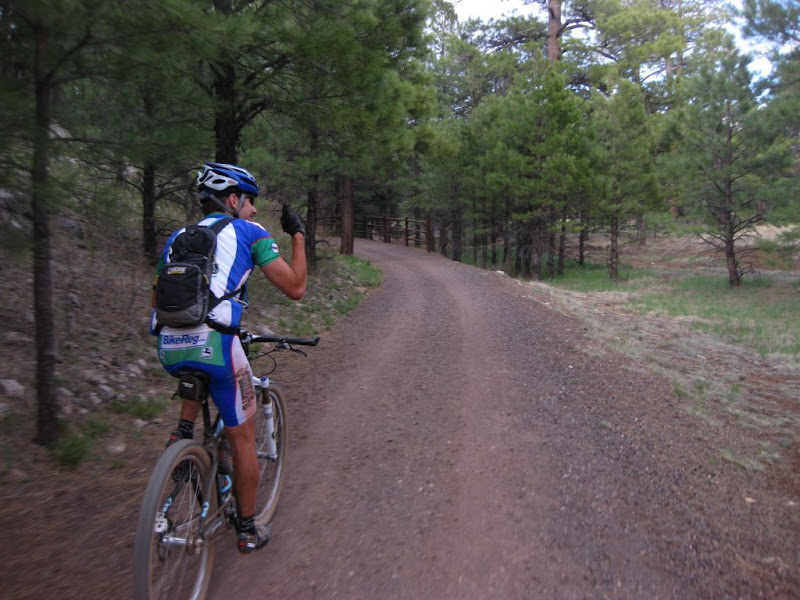 After Old Munds, we took the dirt option into Flagstaff, Fort Tuthill. This picture sums up the day. The chatting, smiles, and picturesque moments....these form a group ride that is truly a delight.

A few friends and I formed AES to promote endurance cycling, "races" being the objective....I never thought a group ride would be the vehicle that was possibly the most effective. Case in point...Phil, pictured above with his smile and thumbs up, wrote the following today:


You totally opened my eyes. Races are fun but, rides like that are awesome to be able to stop and take pictures and to chat a bit as you are rolling along. I had a great time riding with you, Jeff, Nancy, and Hobie. I am afraid you have ruined me, I can't stop thinking about the next big ride.


The first and last sentence life-changing; Phil is hooked on endurance riding now, having just finished one of his longest single-day rides. To the naysayers of group rides, this group ride was a near seamless ride. Check here for more pictures and positive comments.

This Saturday, May 15, the Casner Dirty Century group ride will be starting in Flagstaff. The past two years, this has been a race with ~5 riders in attendance. I decided to make it into a ride in order to increase the amount of participation. The weather seems to be cooperating, highs in the 70s for Sedona.

The views are amazing as you descend from Casner Mountain.

The solo Tuesday Ride went as planned. The trail had no mtb tracks of any kind, just a few old footprints here and there. I decided to keep sessioning stuff until I cleaned each section. It made for some interesting moments, like re-ridng one section around 25 times. I even had a huge stan's burp while I was riding the what-I-thought-was-impossible section.

Alas, nearly two hours later, I cleaned all 1.5 miles and moved onto the bypass to Alamo. I have been riding some slow, technical stuff in order this week in order to ease back into riding. This only after nearly 2 weeks of wheezing/coughing, blowing the nose, sinus pain, etc. It seems like this is an annual thing that really puts me out for 1-2 weeks. At the moment, I still have a light cough. Nonetheless, I can manage to ride 1-2 hours at a moderate pace with the aid of the inhaler.

For that reason, I have been riding to and fro work, adding in some quick sections of technical, like that less than 1 mile of Pima Canyon Trail before the Wilderness. If you ride it up and down and hop around some of those rocks, it makes for a quick treat on the ride home.

Next week, I will be heading up to do the Casner Dirty Century ride from Flagstaff to Sedona. I just finished uploading the GPX file to the AES website. There should be a good sized group in attendance for the 12-14 hour ride.
1 comment: