After checking out some aerial views of the gasline trail and Sweetwater on Sunday, I found some trails that I thought would lead me to Sweetwater and Camino del Cerro. It was too close to tell if the single track was in the Saguaro National Park Boundary, so Eric and I headed out today. First, we had another exciting crossing of the Santa Cruz before riding up Sunset Road to the the single track that I saw from the aerial view. Here is a rough shot of it from Topofusion's new urban view: 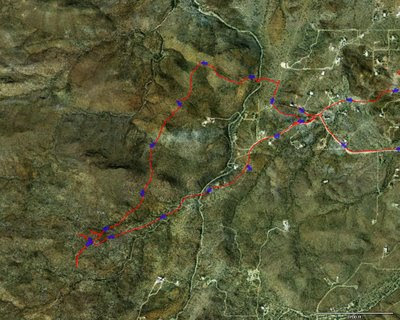 The route for the first 1/2 mile was a lot of hike-a-bike mostly from the amount of rocks on the trail. Thereafter, the route seemed to get more rideable and a little bit more technical. A good view of Tucson below. 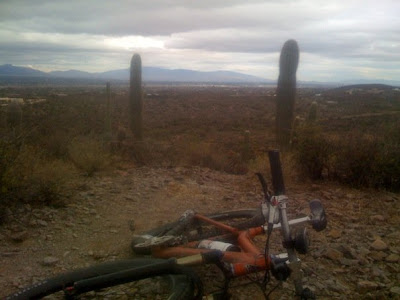 After about a mile, we ran into the an old abandoned mine, titled Gila Monster Mine on the topo map. Eric checking out the mine. 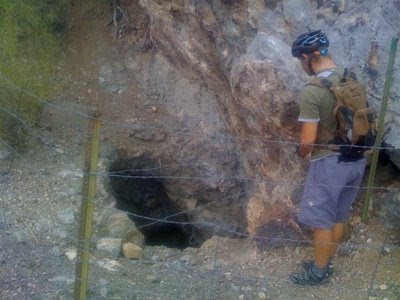 We eventually got to the park boundary/Thunderbird Trail. The sign said .7 miles to Sweetwater and .9 miles to Camino del Cerro. Denied. National Park boundary...no bikes allowed. We turned around and started to head east to what appeared to be a mansion (it had 3 air conditioners).

We crossed the guy's property with the mansion , who just happened to be driving up about the time we were exiting. Hmmmmm... this has happened before to me. My immediate thought was this is not good.

His face turned from anger to calmness when I mentioned I had been on the State Trust (I saw the sign as we were exiting his house). He offered some good advice about the land around his property and we bid him farewell.

We headed back down to the gasline and again, the park boundary sign was up. Denied. We decided just to head back home via Ina.

After the ride, I checked the topo maps and the park boundary is not even close to this section of the gasline. Beyond that sign, there is a huge amount of DT/ST according to my urban shots. Bummer.

The profile of the ride. More exploring to be done. The route from Sunset ST to Gasline to Ina/1-10 w/ 2206 feet of climbing.