I love to cook! 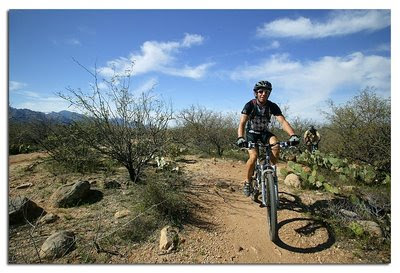 The Rules: List 6 random things about yourself that most people do not know, then tag 6 more people and post their links.

1. I have a finance degree and worked for less than 2 years in the finance world before moving to Mexico to teach.

2. I started mountain biking only 4 years ago after an injury that prevented me from running, my first/old passion.

3. I once road the rails to the east coast to see my brother. During the trip, I jumped on several different trains, took a Greyhound bus, and finally ended up sleeping in the Chicago airport (on the return flight; there was a pilot strike on the American Airlines).

6. Deep down inside, I think that I should've been born in the early 1970s. My reasoning is simple: I think I have what it takes to be an 80s hair band singer.

The following 6 people have been instrumental in mountain biking for me:

Cat (go the distance, I hope to see you finish a dirty century in the next year)

Max (one of the best riders I have known. Currently taking a hiatus off the bike. I can't wait when we can ride again together)

Steve (I am speechless. He is flying down again to come to Arizona and ride. I am so looking forward to next week!)

And I have to say, you are always full of surprises (finance degree?).