Scott offered up to drop me off at Parker Lake last Saturday to start the Arizona Trail 300 last week. If there was every a person to start a 300-mile ride with, Scott would be on the top of my list. We got to the trailhead at about 9am, starting rolling at 9:41am. 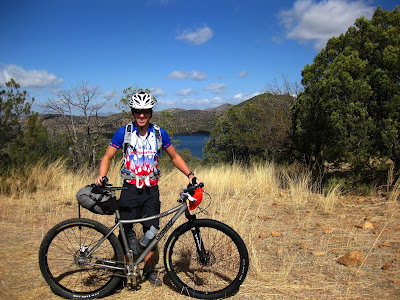 Photo courtesy of Scott Morris (and other 3 photos below)
Scott and I chatted during the first descent into the Canelo Hills. The first few hundred yards of this race are rocky; if you have not secured all your gear, you will know in the first few minutes of the race. As Scott mentioned earlier in his posting, these first few miles are not without the occassional hike-a-bike.... 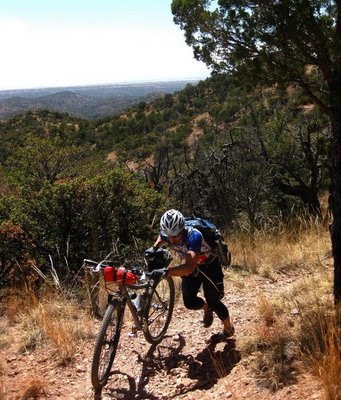 but there are plenty of sections of fun singletrack. The light bike setup was a good move, its lightness was proving to be a great asset during these first few miles. 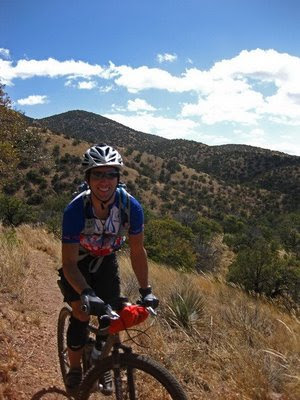 Nevertheless, the first few miles were not without incident, I had my first sidewall gash in my brand new, Saguaro Geax front tire. Epic failure in the first 5 miles. This meant a few things for me. First, it meant that I would be running a higher pressure on my rigid singlespeed. Each bump and rock would now be a little bit more noticeable on my hands and wrists. Also, it meant that I might need to make a detour into a bike shop in Tucson. 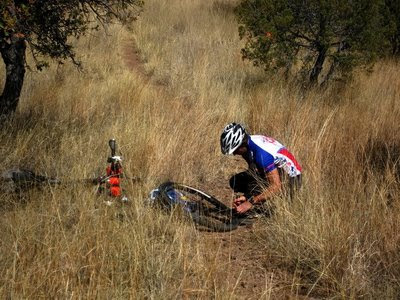 I bid Scott farewell and continued on solo toward Patagonia. The wind was cooling me down, but at times it was a headwind. Despite this, I was making pretty good time during this first 30 miles of Canelo Hills. I remember the fast touring crew (MC, Scott, and Pete and I) arriving in Patagonia at 245pm last year. I was aiming for a similar time.

I rolled into Patagonia at 230pm and went straight to the general store for some resupplying. As I was walking in, I noticed a couple out on the patio of Velvet Elvis Pizza. This is where I went from racing to what I call fast touring. The couple was enjoying a slice of pizza and a calzone. I stopped before I walked into the general store, thought about eating snickers, doritos, and a 2-day old tuna sandwich, and turned around and went into Velvet Elvis for two of the best calzones. Fast touring was the new goal, sleeping in late and enjoying some of the best singletrack in Arizona. 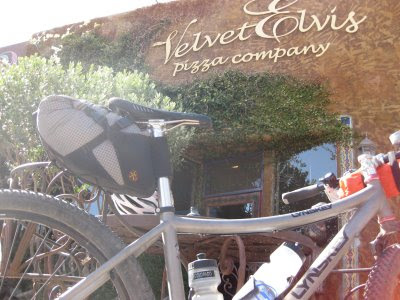 I left after finishing most of the calzones, wrapped up what I had left, tipped the waiter, and left to ride Salero Ranch Road. I headed to the observatory restroom stop about 1 mile of course to fill up water. I also took a few minutes to wash up and brush my teeth. I did the last section of Elephant Head as the sun was setting, then opted to camp at the first gate I came across.

It's kind of crazy how much faster and more fun the Canelos are getting. This year I made it to Patagonia *before* 2pm, even with my flat. Seems like we were riding about as hard as we did last year.

All the trail work and making a few critical sections here and there rideable have made a big difference, I think.