I camped low in the valley on the Chiva Falls loop that 2nd night. The wind was unbearable to the point that it rocked my hammock during the night. I was hoping the wind would die a little bit at six when the sun came up, so I went back to sleep until about 730ish. It did not die rather it keep blowing. Blah, this is what happens when you complain about the weather, now it was even more annoying since it became a headwind for me.

I ended up having a front flat on the Arizona Trail, bummer. I had to use one of the new tubes that I bought at Performance the day before. With the tailwind now, I cruised down the singletrack and the waterbars of this section of the AZT. 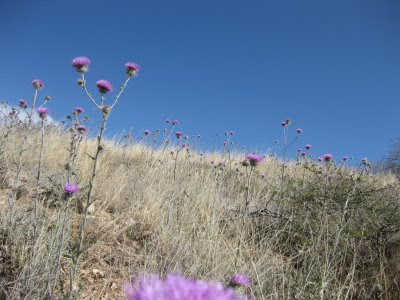 Two hikers passed me as I was hiking up Molino Basin. "Wow, can you actually ride some of this trail?" I chuckled and responded, "yes, on a good day." Today was not a good day, I had one gear and was forced to push my bike most of the way up Molino.

Prison Camp was a delight, the new trail work made it easier for AZT 300 riders to clean most of the trail. I knew that when people began to complain about all the new trail work; I kept silent thinking about how it would feel to have to climb up this section of singletrack after so many miles. No mountain bikers passed me, in fact, I never saw another mountain biker after Scott turned around in the Canelos.

The road was here. A checked my water and time, no Bug Springs for me today. I needed to get to Oracle Ridge as soon as possible. Later, I will go that route, possibly when I have gears. 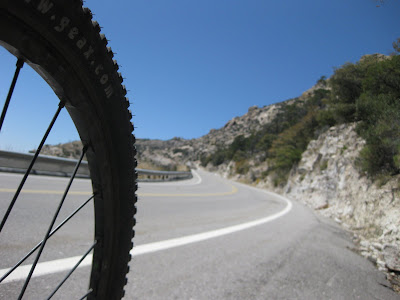 I had brought 200 ounces up the mountain, but after drinking, brushing the teeth, and washing my face, I was down to just about 30 ounces when I hit the road. Just after General Hitchcock, I noticed a half-gallon of water on the guardrail. I stopped to look at the jug and to my amazement, there were 3 more on the ground, completely unopened. I refilled my water bottles and pushed on to Palisades.

At Palisades, I rode over to the spigot. No water. I just exited and kept climbing up to Summerhaven and the General Store. This is the farthest I have ever made it, I thought. But that thought was quickly changed to the thought of home-made fudge. Mmmmmmm!

As is the tradition with climbing Lemmon in some circle (ok, ok it is only my circle, but it should be everyone's tradition), I bought some much needed refreshments 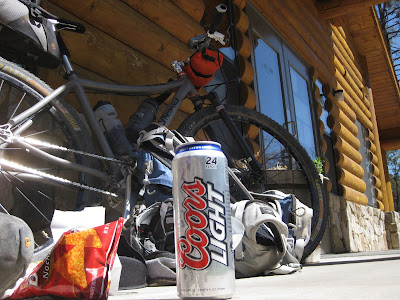 and calories before going to Oracle Ridge. I was surprised to see that the trail is in some of the best shape I have ever seen it. In fact, I think the traverse of death has been slightly downgraded to just a traverse. I only had to hop over one tree during the first 2 miles of the trail, a vast improvement from last year.

Here is a picture looking back up Oracle Ridge. 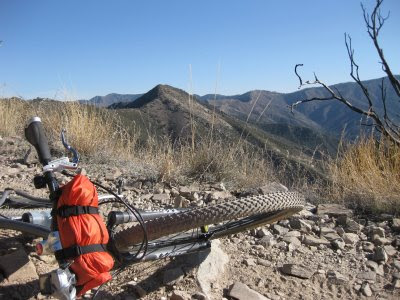 After finishing most of the hike-a-bike section, there is just some fun singletrack to Dan's Saddle. 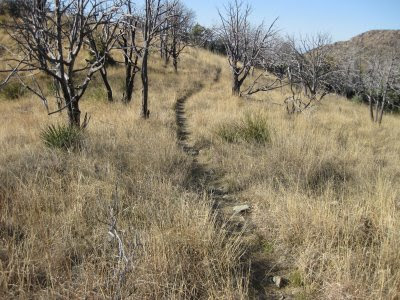 While descending, I took a few moments to look at a possible new route for the Antelope Peak Challenge for next year. I scouted out a new route into Oracle last year, but noticed the possibly of making the race 115+ miles by connecting it to this section of the AZT. Doable but it would involve some long, hard hike-a-bike. Hike-a-bike with a great payoff....sweet singletrack on this section of the AZT.

I passed a thru-hiker that was short on water on Dan's Saddle; she was hiking alone. I asked here if she wanted some of mine, to which she politely refused. I consider any thru-hiker on the AZT to be hard core at least, especially this one. I continued on down Cody Trail and beyond the Control Road to Peppersauce.

Many hikers (like the one I passed up near Dan's Saddle) have passed under this sign, few mountain bikers have had the pleasure of passing under it after 200 miles. I was finally glad to ride under it after 3 years. 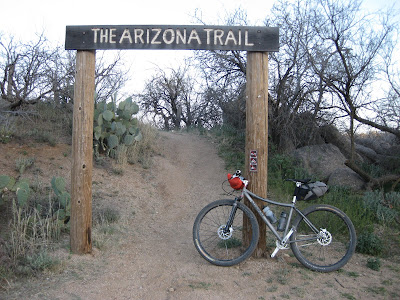 The route into Oracle is fast and fun, perhaps my favorite part of the AZT 300. Possibly just because it is before one of the parts I had been dreaded, the next section of Antelope-Gila-Picketpost. Water is always scarce, moreover the weather was predicted to be 88 degrees that Tuesday.

I decided to get a place at the Chalet in Oracle after stopping at the Oracle Market for snacks. I talked to Scott about the possibility of resting one day (afterall, my ride was supposed to pick me up on Wednesday not Tuesday). The forecast proved to be my final motivator. More wind gusts up to 35 mph were predicted for Wednesday.

After showering, I ate some pizza and promplty went to bed at 930am. The alarm clock was set. My legs felt great, no sore mussles since I began on Saturday morning.