The thread on bikepacking.net about the Grand Loop Race started a few weeks after the AZT 300. Back then, it was easy to toss my hat into the ring and say that I was a strong maybe. As the date came closer, it seemed like a perfect escape from the Arizona summer heat. Who wouldn't want to come bikepack in Colorado and Utah. Scott and I started to arrange our final details a few days before the trip.

We headed up to the Curiak Hotel on Memorial Day to wait for some weather to be in our favor. We waited for a day while we ate some good home-cooked food and devoured home-made ice cream. It is hard to remain focus on the goal around such luxury. Thoughts creep into your head like, how about we just do some day rides around town or my bed would be more comfortable.

It is harded to back down from said race especially when you drive 12 hours. Unfortunately, the window of opportunity opened on Wednesday, so we packed up our gear, 2-days of food and headed out. 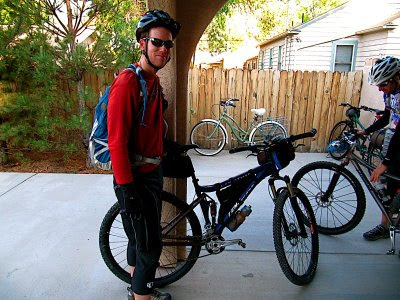 Singleeeeeeeeeeespeeeeeeeeed! was said several times during the trip by Scott. 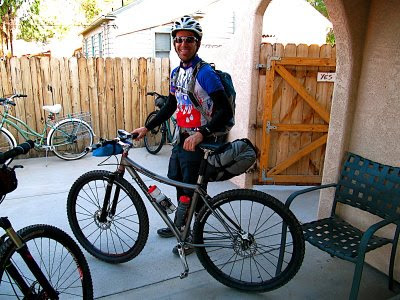 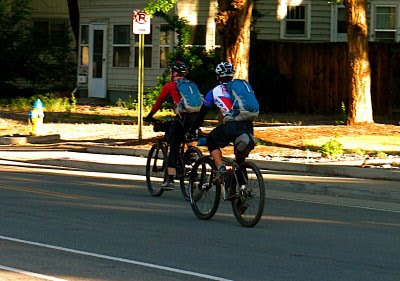 Starting from Mike's house made this seem like a routine ride. Everything (weather, mechanicals, spirits, SPOT beacons, etc.) seemed to be in our favor that morning we started. 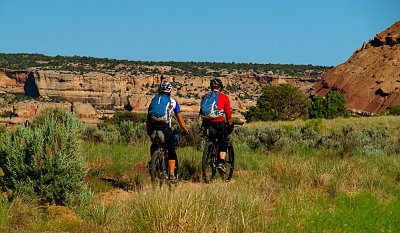 The little bell on my bike even got some use that early morning when Mike came up to take some last pictures. He was a crucial factor in making this thing happen, both his hospitality and encouragement were evident. 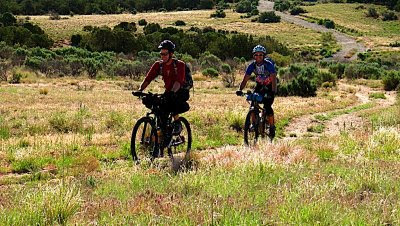 But alas, it was time for Scott and I to venture out into the unknown. I say unknown because I was completely new to this route and Scott, well, let's just say that he had forgotten a lot of the route. Additionally, nobody had ever done the route this way or on a singlespeed. I was in for a treat.

The early morning excitement that was felt on some of the singletrack continued into Rough Canyon. It was a great descent. Between the smiles and laughter, the hike-a-bike on the other side was nothing. We even ran into a few sections of clay on Bang Canyon that we had to carry the bikes around. 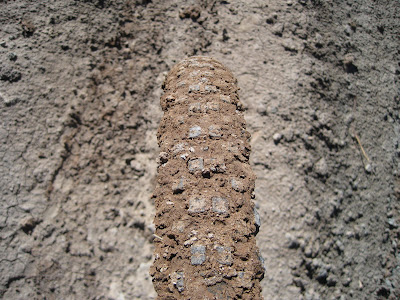 The touted Cactus Park was nice and smooth, very little sandy sections. We were moving pretty fast, taking only a few minutes to reapply sunscreen or eat. Otherwise the goal was simple: just keep cranking out those miles. 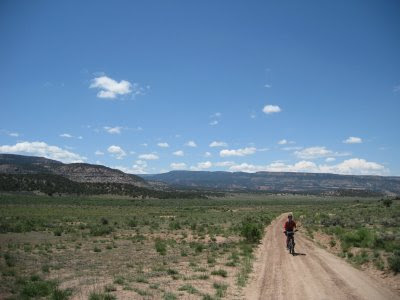 These early miles were coming easy since Scott and I were riding together. We chatted a little bit about previous racers...logistics, gear and the like. At the start of the race, we had agreeed to ride through the night together before we started "to race" after Bedrock. Basically, it meant that I did not want to be slowing Scott down if he wanted to hammer ahead.

After finishing the solo AZT 300, I was suprised that I did not use my music from my nano Ipod. So for this trip, I left the tunes at home. Nature has its own melody of music (trees dancing or the warm wind moving the green grass) or you can get lost in the passing views. 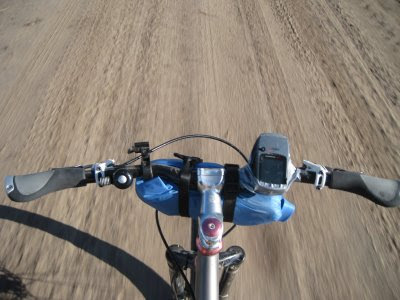 We were rapidly descending into the final valley before hitting the Divide Road, when I glanced up to see an animal in the road. "Skunnnnnnnnnnnnnnnnnnnnnk!" I yelled, only to later realize that it was a porcupine. We stopped to wait for it to meander across the road. We actually got to see two porcupines during this trip; although I felt like the second one was pretty close to my bike, it just waddled out of the road. 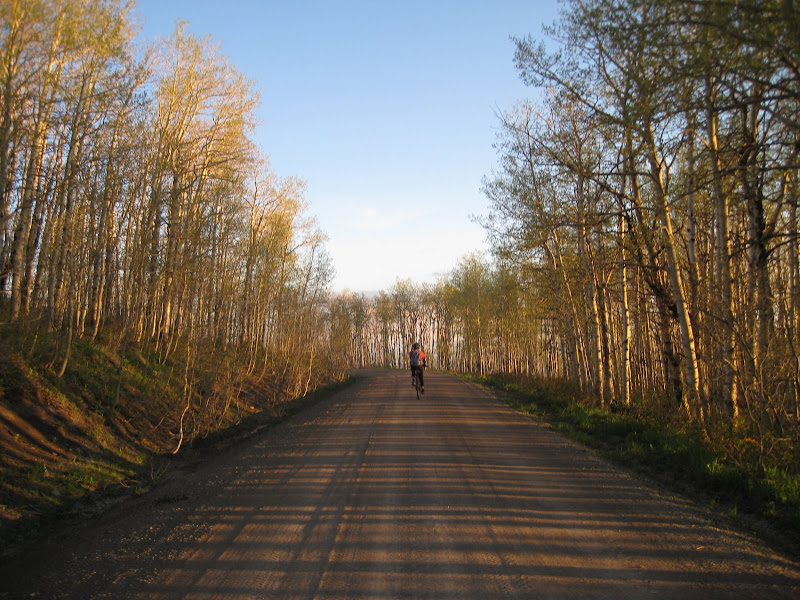 The Divide Road was a the perfect transition into what was coming. Its smooth, recently graded roads allowed for some down time from the climbs of the Big and Little Dominguez. The aspens when coupled with the views were inspiring. The birds were singing in the trees, this ride was truly remarkable. 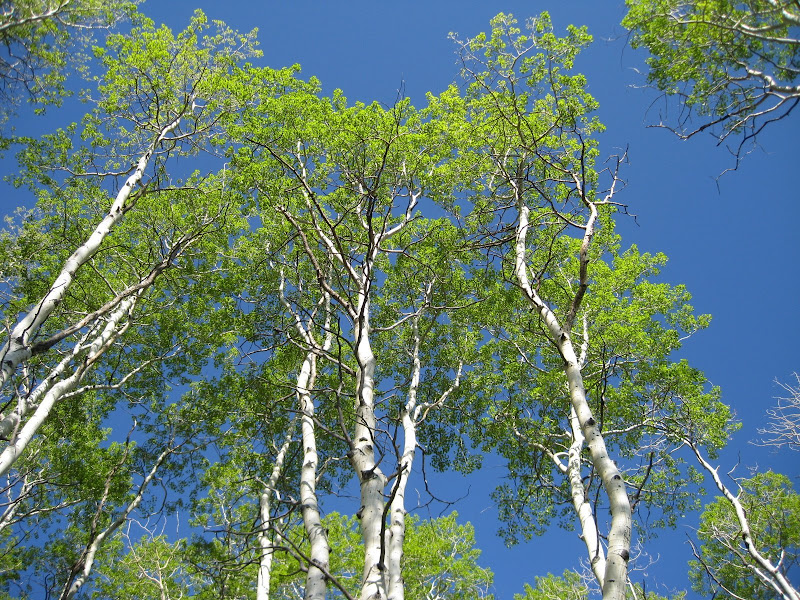 More than 12 hours had passed since we started that morning. By this time, the leftover pizza already was eaten, water had been purified, conversations had taken its coure, it was now time to enjoy the views before it became dark and cold. One thing can be said about riding with someone, at nightfall the conversations seem to slowly diminish into barely a whisper.

We ate on the descent from the Divide Road to the Swamp Thing Singletrack. Freeze dried meals for both of us. Mmmmmmm. It was a welcome relief from the bars that we had been inhaling.

Earlier in the day, Scott had told me a bit about the Swamp Thing and Roubideaux Trails, so I knew a little bit what to expect. I think it was here that I first began to hear the classic, funny sentence when we met an impossible section: "Wow" or "I completely forget about this part of the trail." Frankly, I was dumbfounded. Having completed the AZT 300, I thought the Grand Loop Race would be something similar with respect to the amount of singletrack/hike-a-bike. The next 6 hours would be one big slog through creeks, up and over downed trees, and up/down super steep hills. The only reassuring thought was that you sometimes need to work for the good parts of the race.

Route finding during Swap Thing proved efficient with the GPS; the next section of the Ruby-Do would prove to be one of the hardest during the route. The dew had already soaked the ground, so the high grass would invariably soak our shoes and socks. All was quiet. The chatter of the birds completely diminished. Neither Scott nor I said any word that was not important. We just did what had to be done. Scott had pulled us up to the Divide Road most of the morning and afternoon, ergo I decided it was my turn to push us through this section of the trail. And so we did, but not without a small blunder. Crossing one of the sections of the creek, I managed to drop my bike into the water. Instant GPS failure for the rest of the trip. In the mishap, I also managed to submerge both feet into the creek. Instant cold feet for the rest of the night.

We set up camp somewhere around 3am and got up at 5am ready to finish the Ruby-Do. Riding from sunrise to sunset has a special place in my heart; Scott was able to capture some of the early sunrise in this picture of me hiking out of the last sections of Ruby-Do

A few hours passed before we really got warm again. We ran into Matt and Josh, two racers that had started early. The following are two shots Scott's photos: 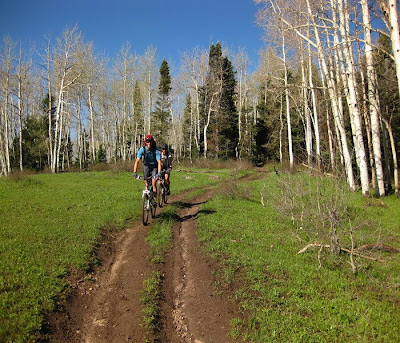 We chatted for a bit before continuing on toward the singletrack. This was another hurdle, since it had some pretty big snow drifts. Moods were pretty low during this part of the trail, I think we both wanted to be on a fast descent toward Bedrock instead of pushing our bikes through snow drifts. 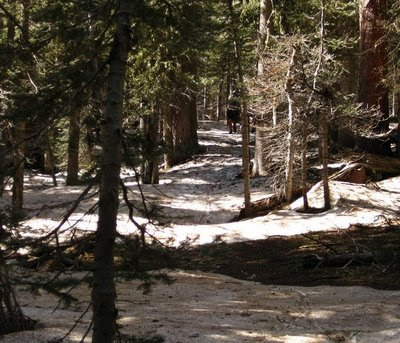 Honestly, I think we both lacked motivation and leadership during this 15 hours of the trip from Swap Thing to the end of the singletrack at the Divide Road. We fell into a brief spell of despair, the "wow" and "I can't believe..." comments were more prevalent. Had we each been riding alone at this time, we would have individually pushed ourselves to ride through this section instead of dropping the pace a bit.

Part of the drop in pace was also to a little fatigue, I know I was tired and wanted to break. This left the possibility of reaching our supply point (Bedrock Store) during store hours impossible. We tried to make up lost time during the next sections of the trail, dropping down from the Divide Road and onto toward Tab Creek. 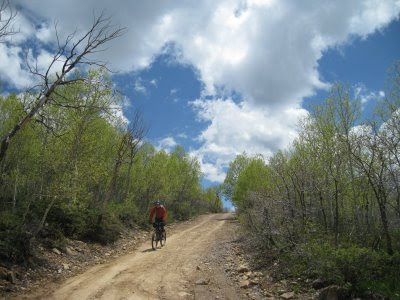 When we realized that making Bedrock was implausible, we opted to rest an hour at Tab Creek before continuing on. At 10pm, we found a great camping spot on the mesa above the highway and set the alarm at 6am to head into Bedrock. 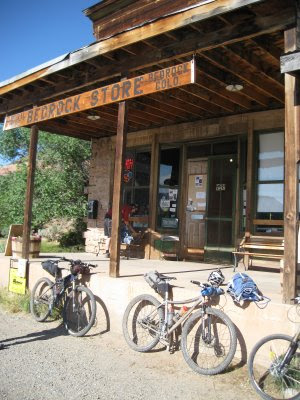