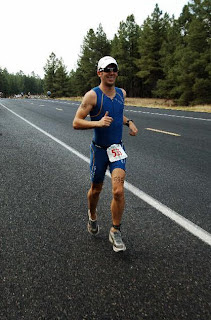 MountainMan Triathlon: This is the best-organized, best-attended, and prettiest location for a triathlon. The night before, Nick Tanner from Tricats fed me and let me stay the night at his place. Props to the tanner family for making my race possible. The next morning, everyone got up at 430 to head over to Upper Lake Mary.

As I was setting up my transition area, I realized I had forgotten my helmet. I had to ride back, grab it, and come back with less than 10 minutes before the start of the race. I ran barefoot along the horribly paved road and boat ramp only to realize that I was too late for a practice swim. I jumped in the 72 degree water and put my goggles on. A few moments later, my nervousness plummeted to utter despair as my goggles broke, more specifically, the little rubber band that holds the two lenses together. At this point, I thought I would be doing this race without goggles. But could I really swim 1.5km in a lake without goggles? I tried to fix them with what little time I had remaining. With less than 2 minutes before the start of the race, I fixed them, McGyver-style with some rubber that I found.

I put them on and heard the 30-second warning. Man, that was close. My firefighter friend Nick once gave me a piece of advice about swimming... "You just need to keep your head in the water, face down, and continue to swim no matter how tired you feel." I had decided that this was going to be the race that I "kept my head in the water" without doing the backstroke, doggy paddle, or breast stroke... 100% freestyle in order to get a new PR.

As I rounded the first buoy, I was surprised to see a large pack behind me. The classic pounding, beating, and pushing at the beginning seemed to pale in comparison to my Xterra races. About 100 meters after the first buoy, a guy kept waving his arms at my feet. The beating continued intermittently between my strokes. A triathlon is one of the few sports where it is normal to kick an opponent that is hitting you. I increased my kick to warn him. He backed off a little. Now it was time to focus on my tempo and technique....Second buoy, still going strong. I was breathing unilaterally on my right side, so I as turned to head back to the finish line, I could see everyone behind me. Face down, breathe out your nose, long arm, cup the water, pull, face out and breathe... I kept doing this until I realized the greenish water looked a little brown. Oh, I made it already, I was at the exiting boat dock.

I looked at my watch 29 minutes. Sweet, my new PR. I ran to the T1 to get my back and shoes. I had a trouble putting them on since they are not really my size (hence the 2 minute transition). I ran out the exit. "Water or gatorade," a kid yelled in my direction. I had three bottles, probably too much for 26 miles of bike ride.

Swimming is fun and all, but biking is what I live for. I felt calm and collective as I started to pass people slowly during the ascent up to the turn around 13 miles ahead. Trying to lighten the atmosphere, I tried to talk everyone I passed.

One hour and 8 minutes later, I was biking into the T2, feeling like I did very well on the bike. you'd think that running is my stong point, but for the last year I have been battling achilles tendinitis in my both of my heels. Adding to the problem, was the one-mile climb up to Marshall Lake, a little under 1000 feet of ascending/descending. I managed to finish with a respectable 46 minute 10k run, not what I wanted, but I was content.

Overall, I came in 39th place and 7th in my age group. Results

After the race, Dave Chenault and I went mountain biking to Fisher Point and continued on the Arizona Trail C into downtown. A picture from Dave's blog of me at Fisher Point: 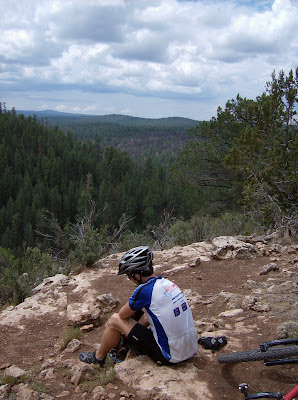 Dave has a sweet new Lenz that he was been working on the entire week, but a well spent if you ask me since Dave was descending like a madman, schooling me most of the ride. While in the downtown area, we stopped into Absolute so he could get a few things tweaked and shot the breeze with the staff.

We went to the brewery for a chicken sandwich and beer, and headed back to the cars via Faye Canyon.

Good job Chad! I'm pretty proud to call you my cousin at this moment. Especially the McGyver move with your goggles. So cool. :)