Jeff, Mike, Lee and I formed a 4-man team called Team Tubac that raced in this Memorial Day weekend race in San Carlos. It was a 12-hour ride with a 8km loop starting at 8pm on Saturday until 8am on Sunday. I was the first one to start (since there was a 200-yard run) and thereafter we each did 2-3 loops depending on the time of night.

We were in 2nd place the entire time, but I had two flat tires in a row on one of my loops and barely made it back to the finish/starting line. I was nervous that we had fallen to 3rd becasue of the flat, but we didn't. We just lost a lot of time. We ended up in 2nd place behind a team from Mexico. In fact, we were the only team from the US. It was a great race. 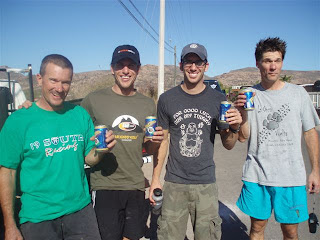 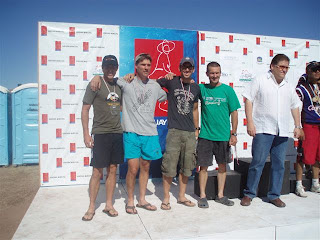 Team Tubac on the podium with the medals 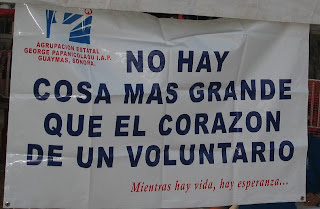 Like most races, the race staff was made-up of volunteers. "There is nothing better than the heart of a volunteer"

In Santa Ana, we ate some caldo de birria (goat soup) and chatted with the owner about her goat farm. At the Nogales border crossing, we rode our bikes around during the 3 hour wait. I got back to my house at about 9pm on Monday, Memorial Day.

Did I ever tell you that you are my heroe? Everything about you screams "freedommmmm" (from braveheart). I tip to your ability to go go go. Keep up the good work and keep striving for the epic ride.