Check out this post on the recent trail work on Samaniego Ridge before you read this write-up. If you frequent my blog (or live in Tucson), you probably know that how much work has gone into Sammy in the past month. As soon as I heard about the trail work, the obvious idea passed through my (and Scott's head)...the Samaniego Epic, ride up Lemmon singletrack and down Samaniego to 50-Year, finishing at Catalina State Park.

If you look at the Red Ridge Epic last February, you will understand the scope of this backyard epic. There is something about starting/ending a 12+ hour ride from your house, especially one that is latent with primo singletrack.

We started at 6am after a hearty 5:30am breakfast at Bobo's. The early bird special plus 2 biscuits and gravy was the secret fuel to propel us up Lemmon to the first signs of Prison Camp singletrack. I don't claim to have all the answers to endurance mountain biking, but I do provide you this secret....calories count. 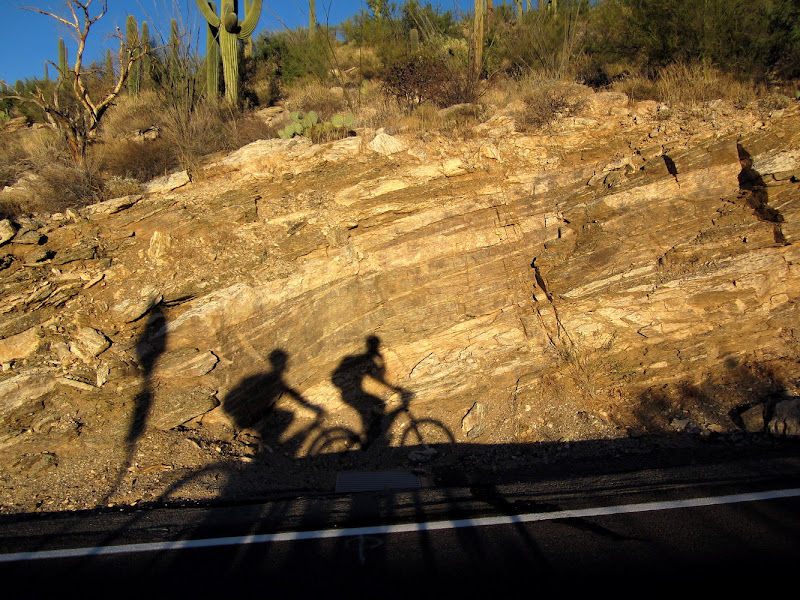 Photo by Scott Morris
Do you know anybody else that makes road riding this much fun? Look at that picture! 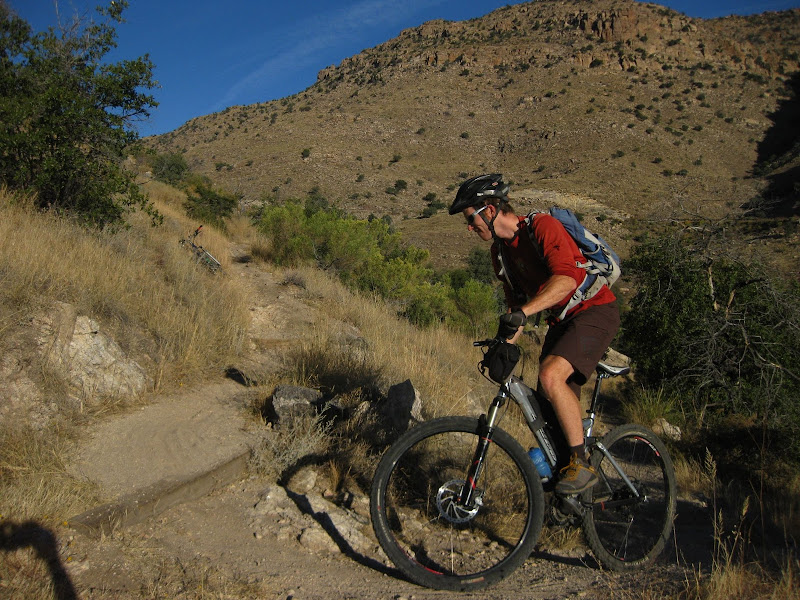 "I forgot how much fun riding up Prison was, this is great," commented Scott. 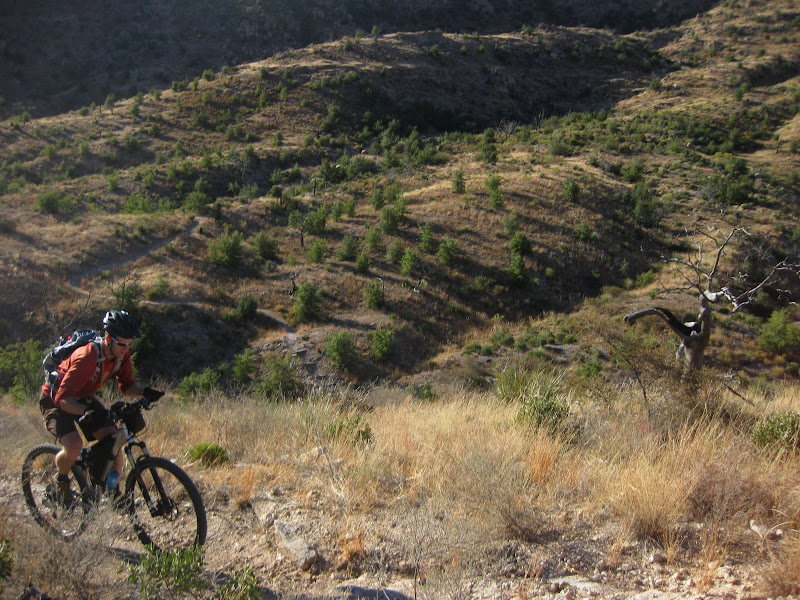 Truly a great way to start the first section of singletrack. The thought of going up Bug Springs was laughed at when the option came. 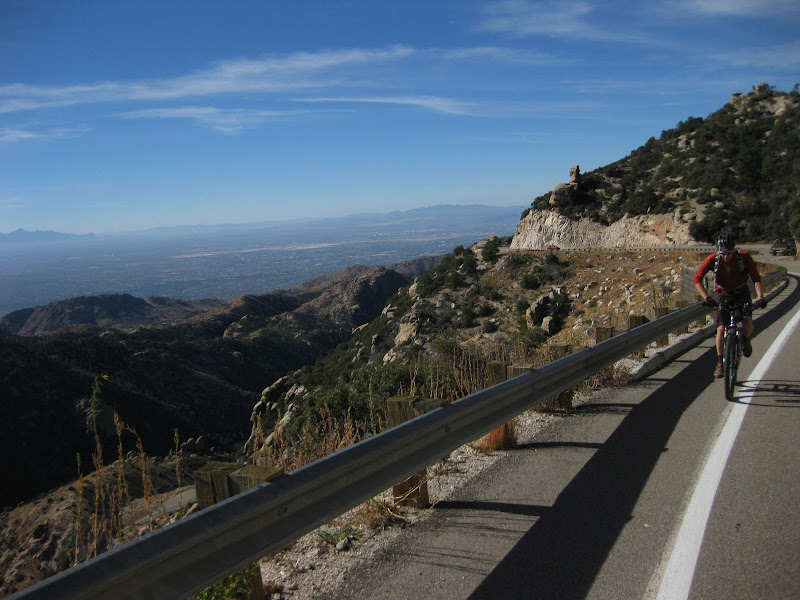 There are just too many unknowns when you do a ride like this. It's best to do the hard singletrack and leave the super hard, time consuming singletrack for later....and yes, you can quote me on that. 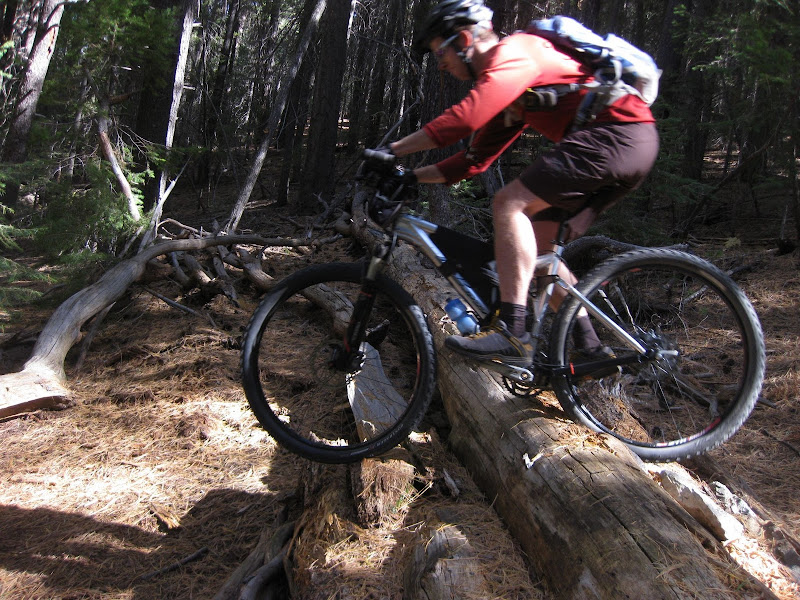 The up-and-over is still rideable on Secret. 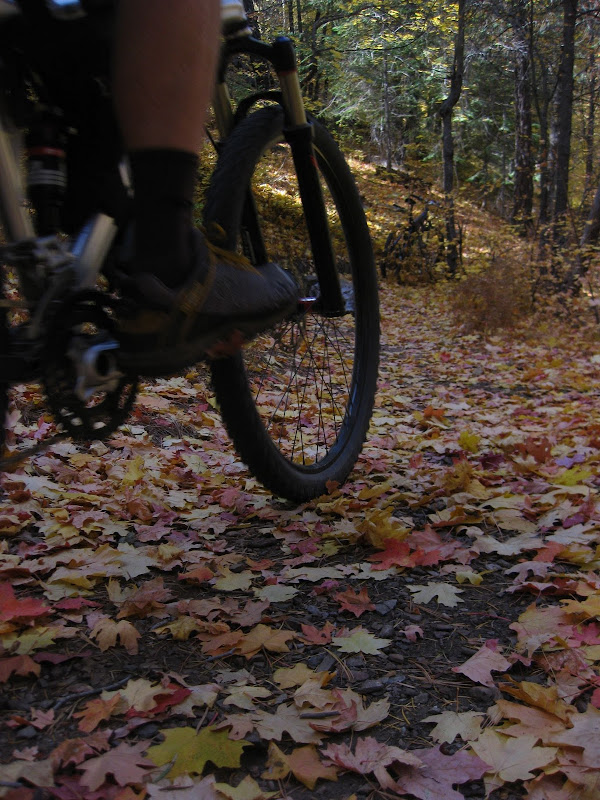 1918 Trail was full of fall colors, the kind of stuff you would expect to see in other parts of the southwest. 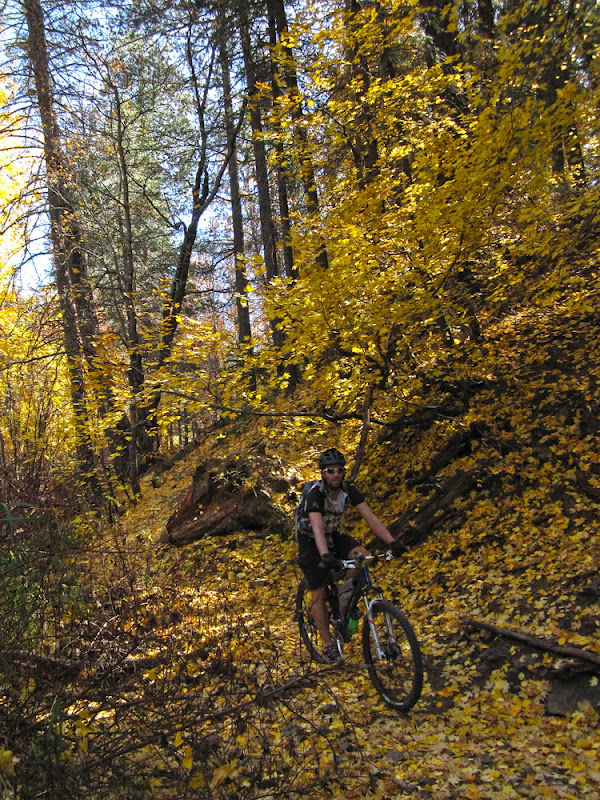 Photo by Scott Morris
Since few people ride these trails, you'll notice the lack of "singletrack" in some of the pictures. We did see a few hikers taking pictures. 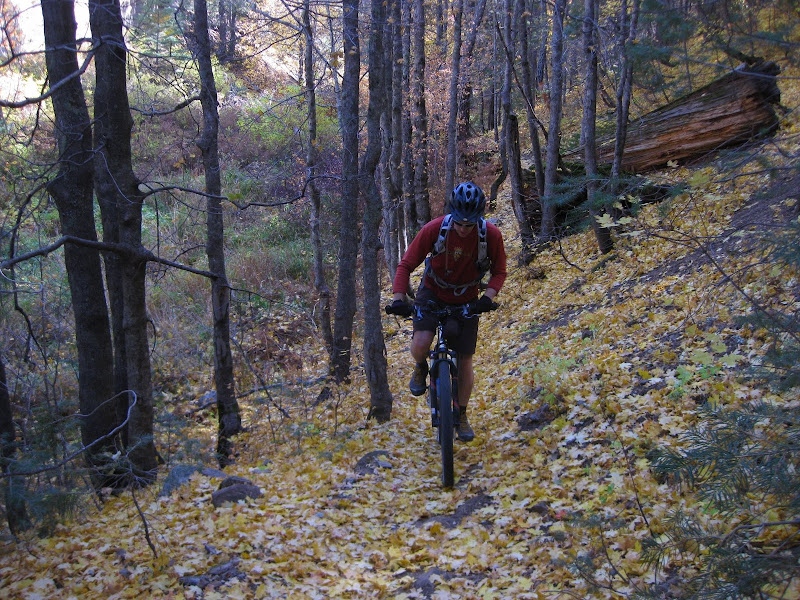 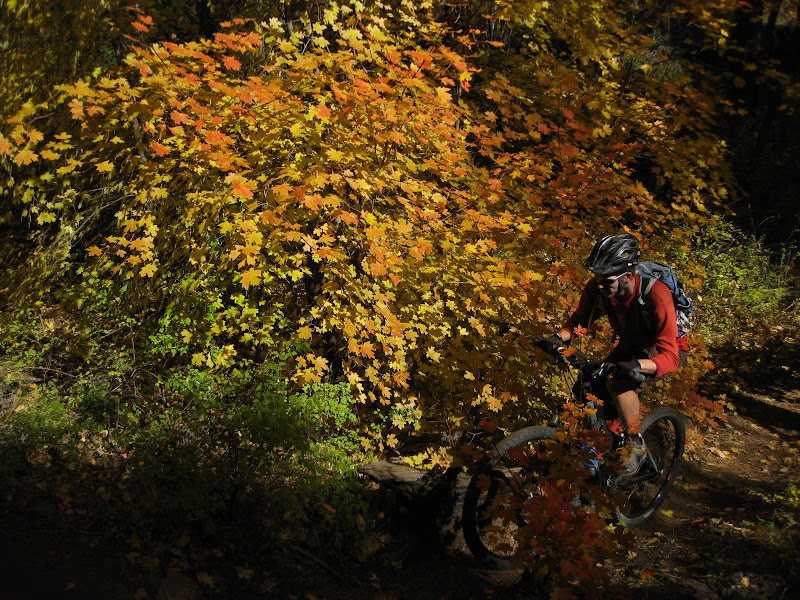 After Sunset Trail, we headed up to Mt Lemmon General Store. Last year you will recall that I was boasting about the Big Tex. 500 calories for $1, simply amazing.

The tradition was kept alive by both Scott and I. We loaded up on the type of calories normal for the General Store, Peanut Butter M&M's, nuts and gatorades. On a quick side note: We could be seeing more of Max Morris, as he owner of the store mentioned that his last day was the following day. Good news for bike lovers every where, you might start seeing him on this blog soon. 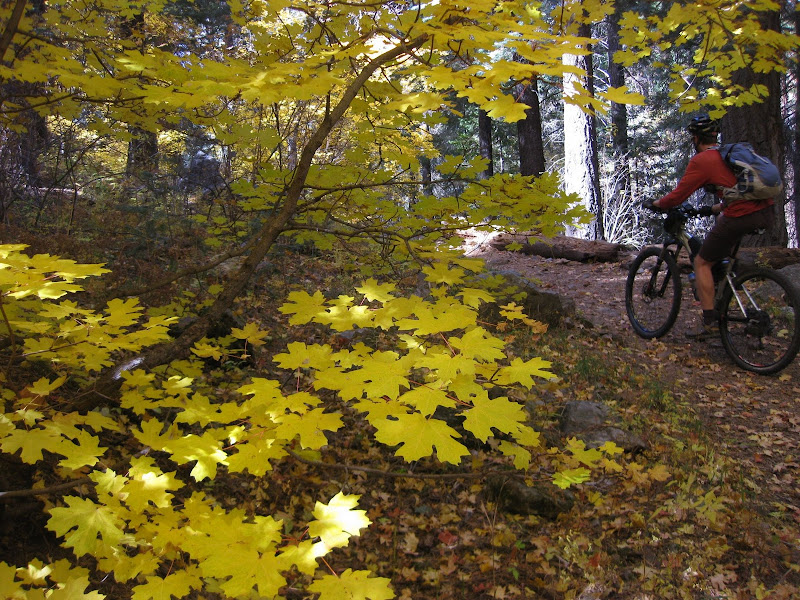 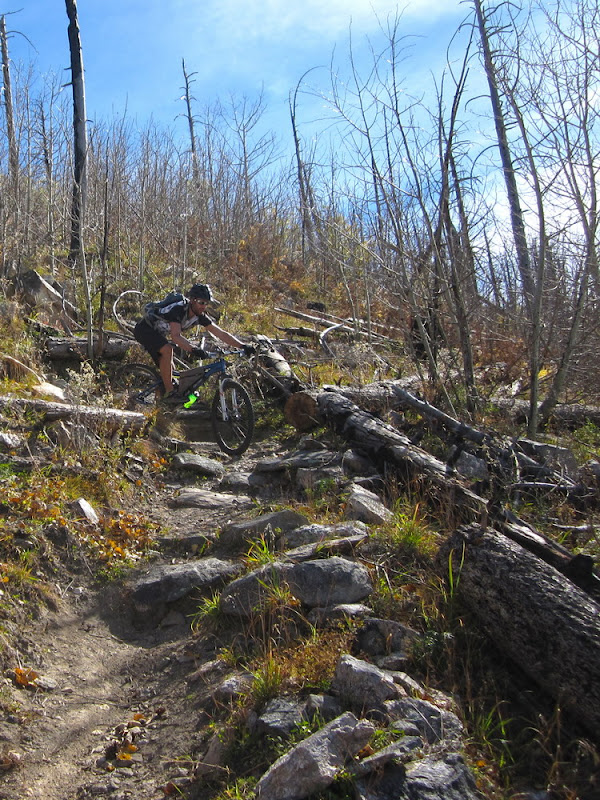 onto meadows before hitting the main event...Samaniego. 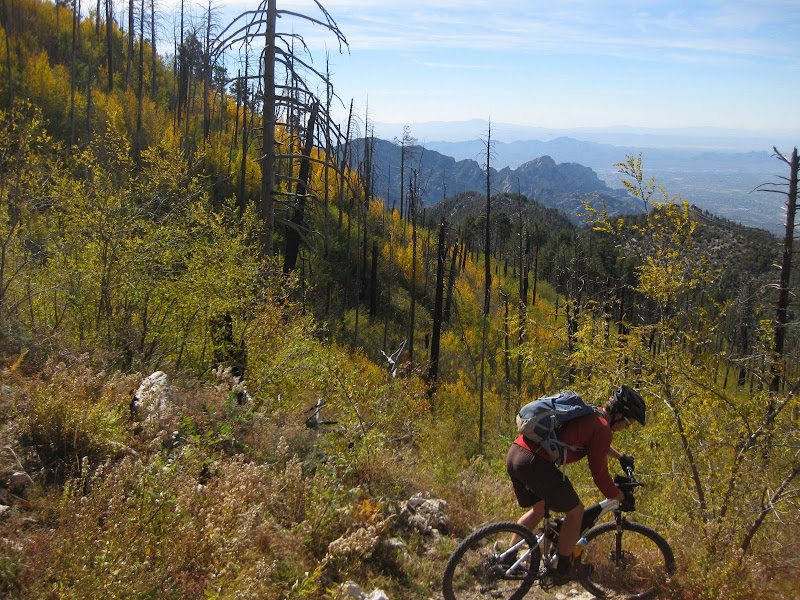 Wilderness of Rocks, Pusch Ridge and the Santa Ritas in that order (from front to back) in both of these pictures. 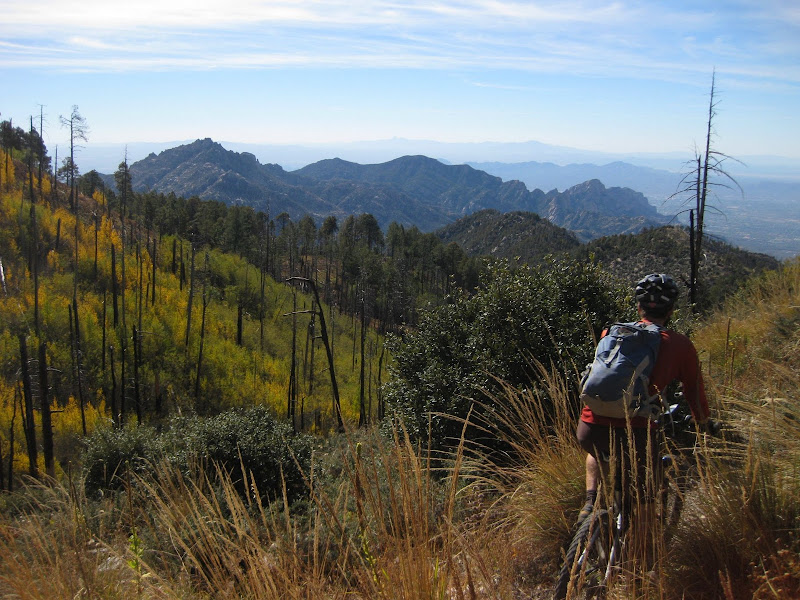 We took the "better" route that forks off to the east. It was a lot more rider friendly... 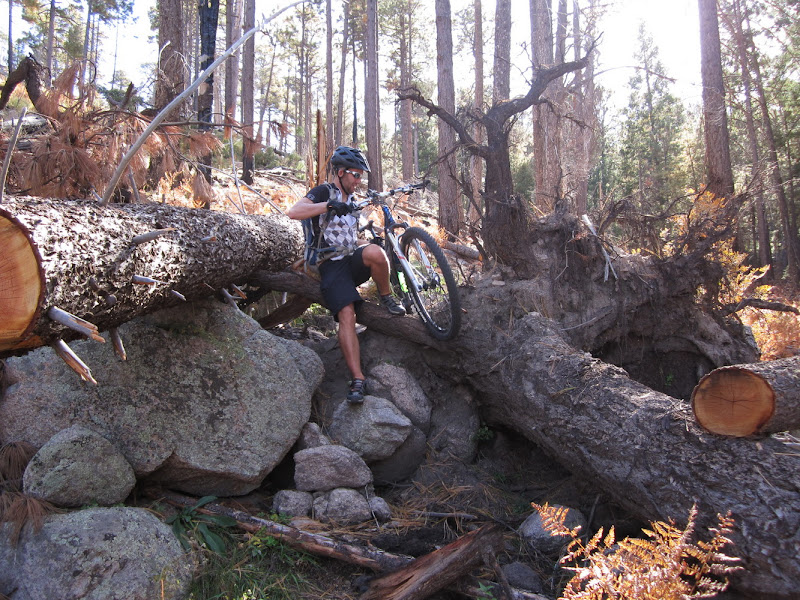 Photo by Scott Morris
...well, minus this little section. Riding an epic is special enough, when you realize that it was made possible with the volunteer of local mountain bikers, I think it makes it that more special.

From where we started 3 weeks, the trail has seen a little under 2 miles more... 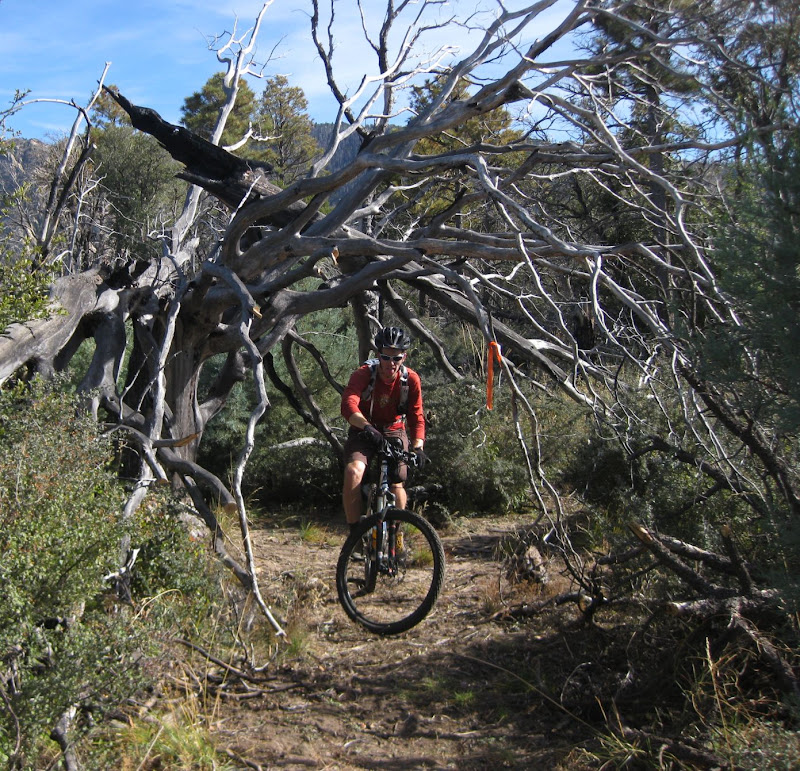 including this, which Scott coined as the "Tree of Souls." 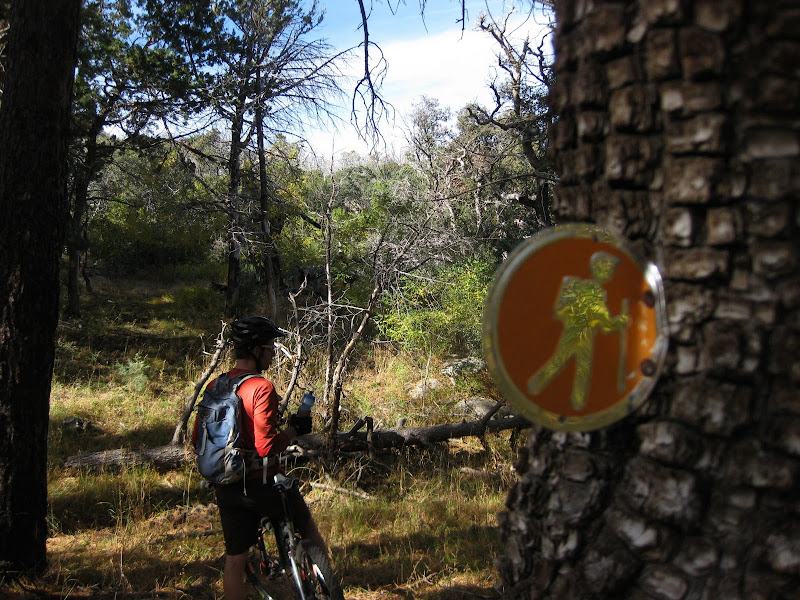 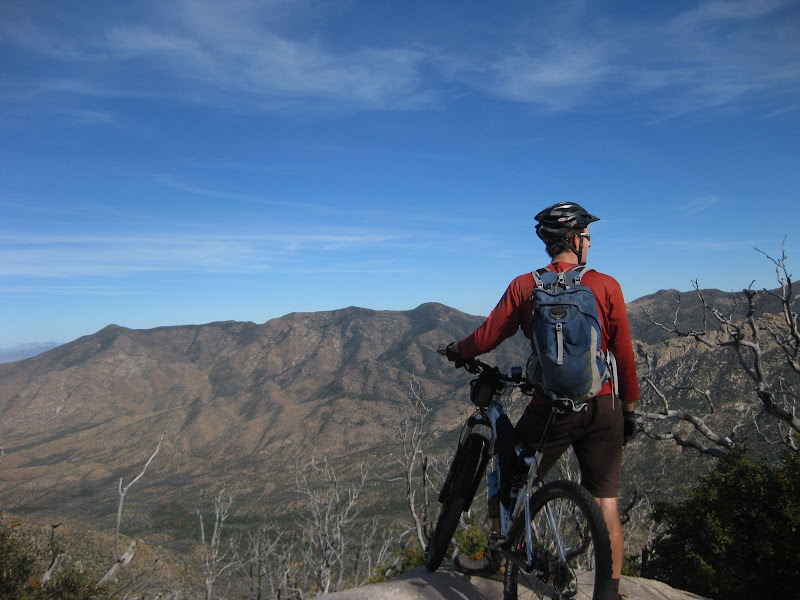 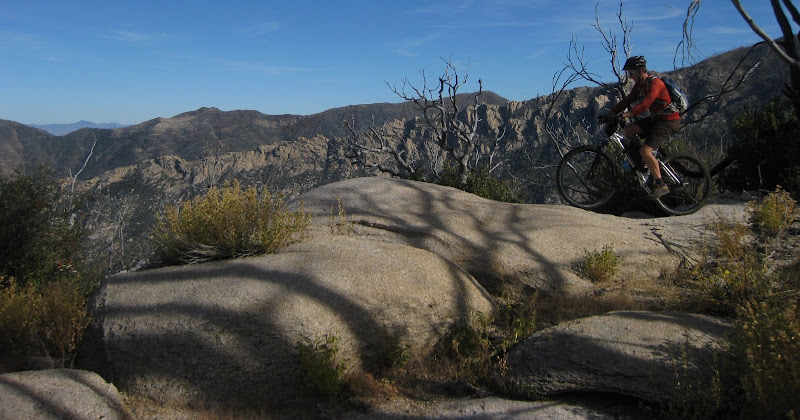 Plenty of b-lines exist on the trail, knowing where to find them is easy when you ride with someone that has been down this trail 3 times in the past week. 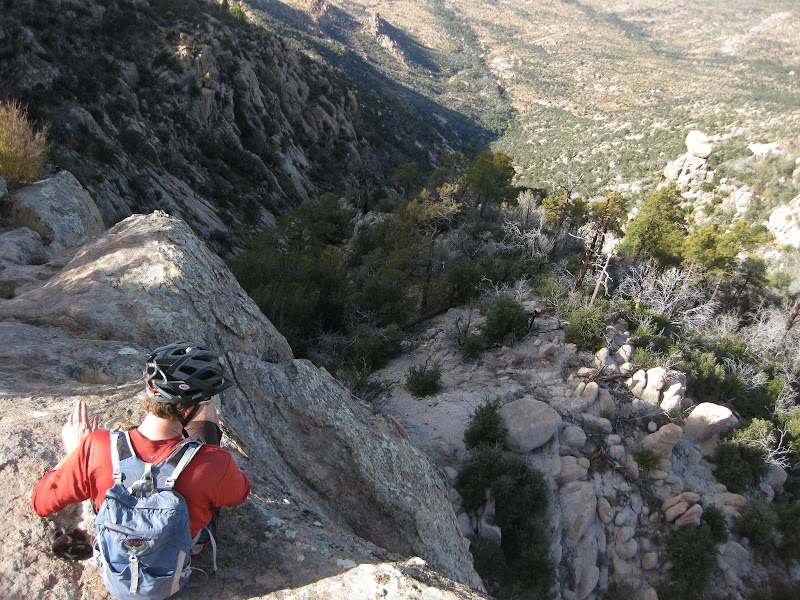 We stopped for lunch to check out the Cork Screw of Death and Mule Ears. 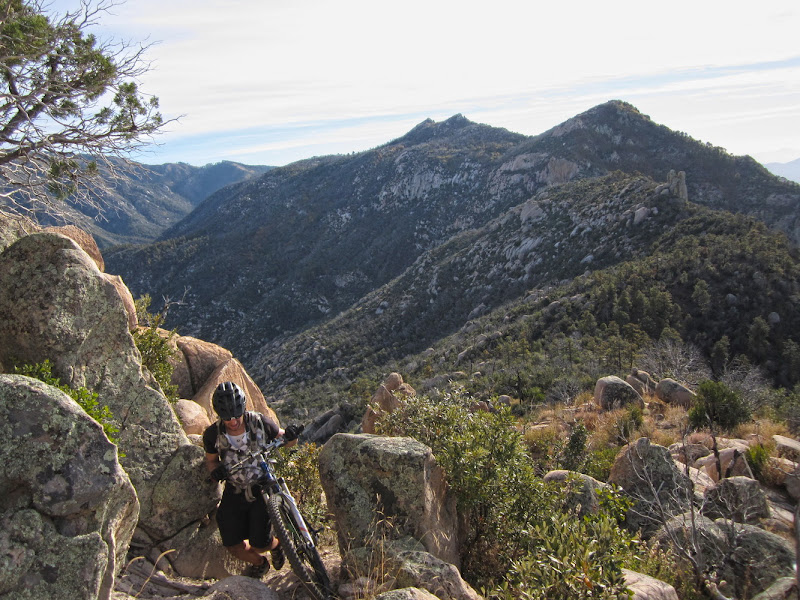 Photo by Scott Morris
This is my favorite picture from the trip as it underlines the amount of adventure needed to take such a ride. Although the reward eventually pays off.

Continuing on past the Cork Screw was the highlight of the trip. At one time, Scott mentioned something I was thinking..."Does this singletrack ever end?"

The rythym went something like this: ride supper fast, get some air, ride fast again only to slow down for a switchback, look for the trail among the high grass, then repeat. 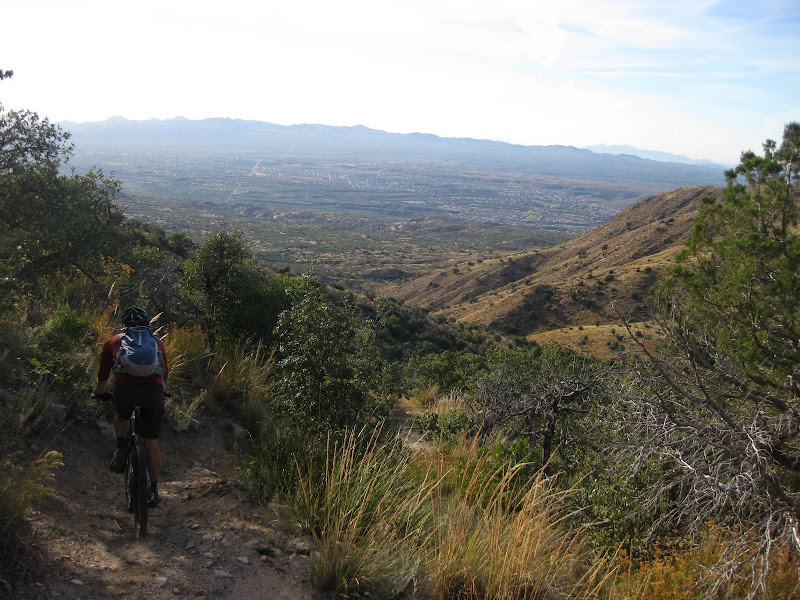 As we neared Charouleau Gap, the amount of difficult switchbacks increased exponentially. It really was a great way to end the trail. 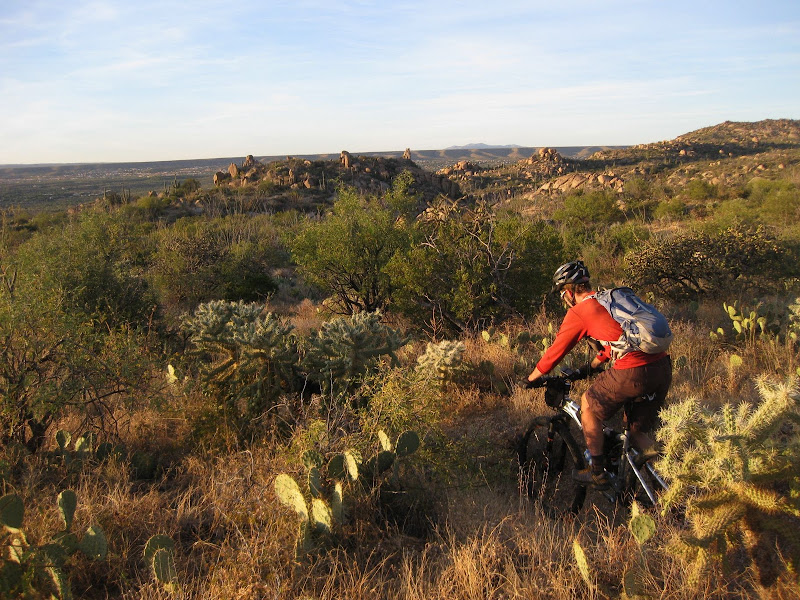 We continued on toward more singletrack, in the form of Cherry Tank. Despite the overgrown warning Scott had mentioned earlier, we pushed on through some of he growth and erroding trail. 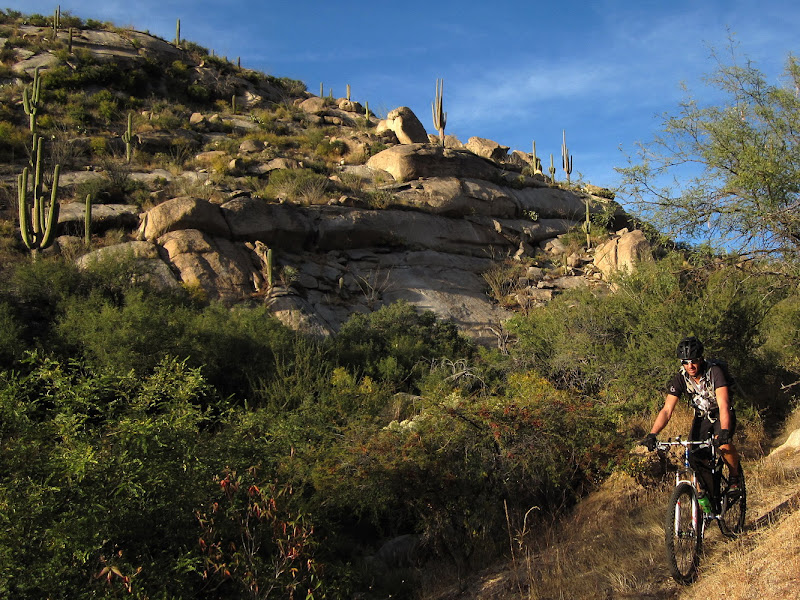 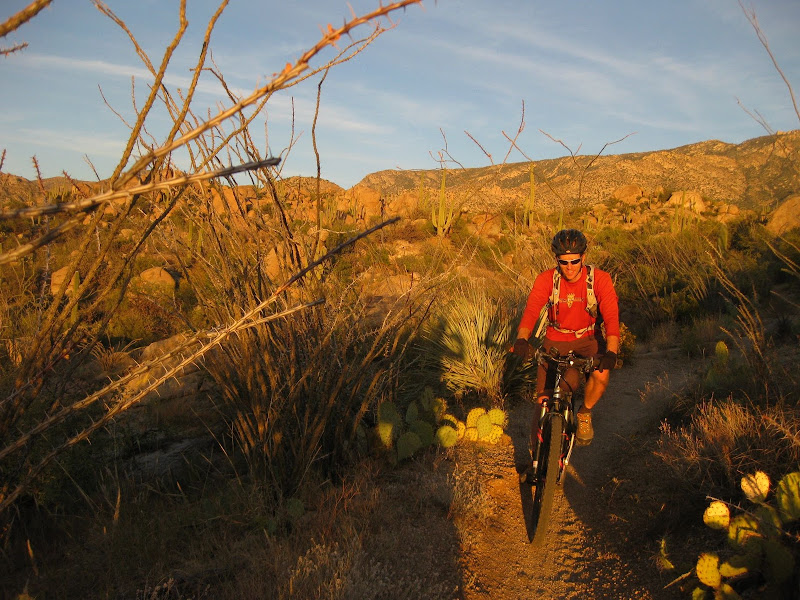 and to compare, our ride last November, 2009

The only question that we have to ask ourselves: When will we do a 24-hour epic from our house? We know the route, funny thing is that it is probably under 100 miles. Although 100 of the hardest, technically demanding miles anywhere. It might even be a Behemoth-worty ride.

Great pics!!
I wussed out on the 26" wheel swallowing log roll :( maybe next time..

Uhhh.... going up Samaniego kinda scares me. Does anyone make a 40 tooth granny ring?!

24 hours... you are right that it might be what it takes.

Great post. The multi-color shot of me is one of the coolest pics I've seen all year. Well done.