Time spent on the bike leaves you pondering about all sorts of things, especially about future routes. A few weeks ago, Scott and I were riding out at Black Canyon Trail north of Phoenix when we both realized the bikepacking potential for this place. As the dream started to grow bigger and bigger, I started to think about developing a near complete loop from Phoenix.

The following week was spent looking at aerials, downloading GPX files, asking questions from other riders in the area (which coincided with Yuri's similar idea).

As mentioned earlier, the route hit up some major Phoenix Preserves before heading north into Cave Creek/Seven Springs. I got an email (half-jokingly) questioning my route... "only 18,000 feet of climbing?" It did seem kind of week for nearly 160 miles. I started to look at more miles in the Bradshaws. The finalized loop, per some Scott's calculations, was about 230 miles and 35,000 feet of climbing.

With temperatures rising, Lee and I headed for the cooler, northern part of the proposed route....the Black Canyon Trail. The plan was a 3-day loop of Black Canyon Trail up the Bradshaws via some forest road and down with a combination of "singletrack" (used lightly here since it is only based on aerial shots) and forest roads. 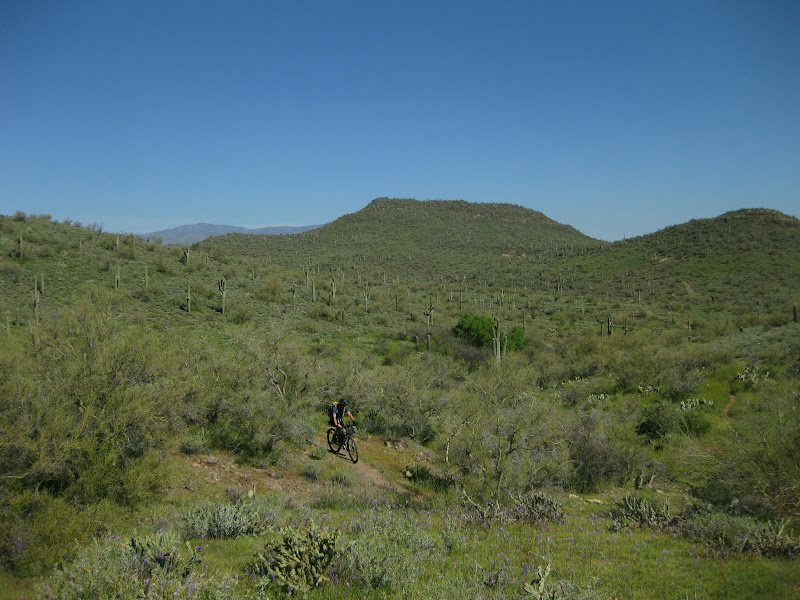 which means the singletrack is greener and skinnier. 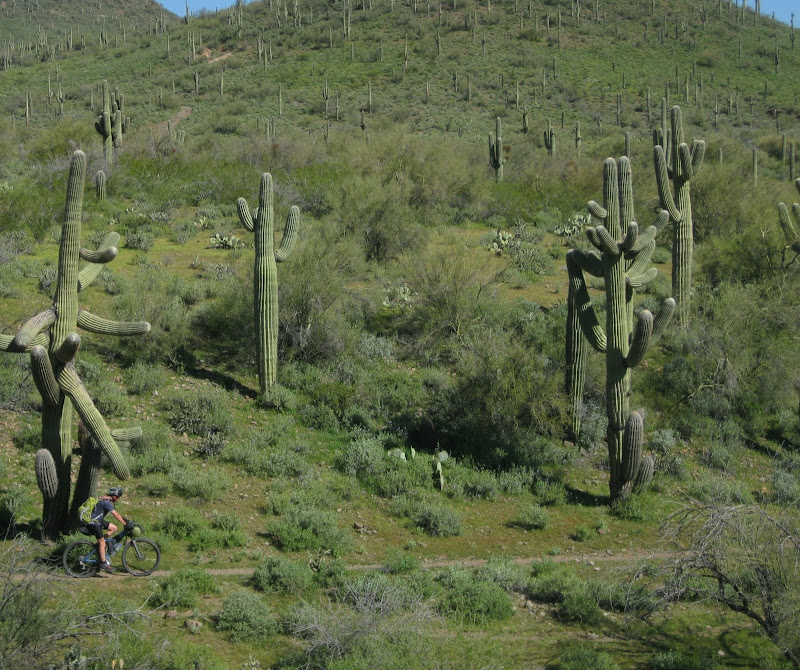 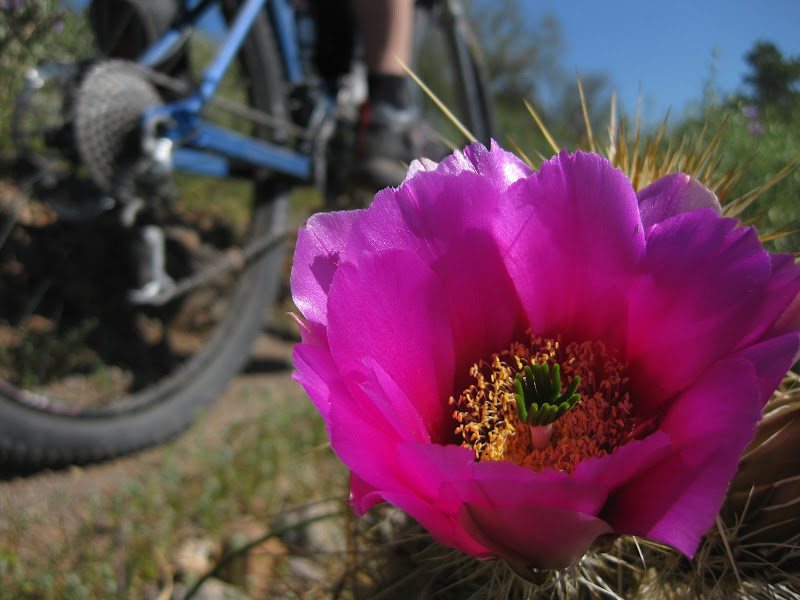 Near the Table Mesa TH, the singletrack heads below a "shooting range." Just like typical Reddington-style, 3 people were shooting off right over the trail. We paused for a second to let them stop and reload before trying to speedily whiz by them. 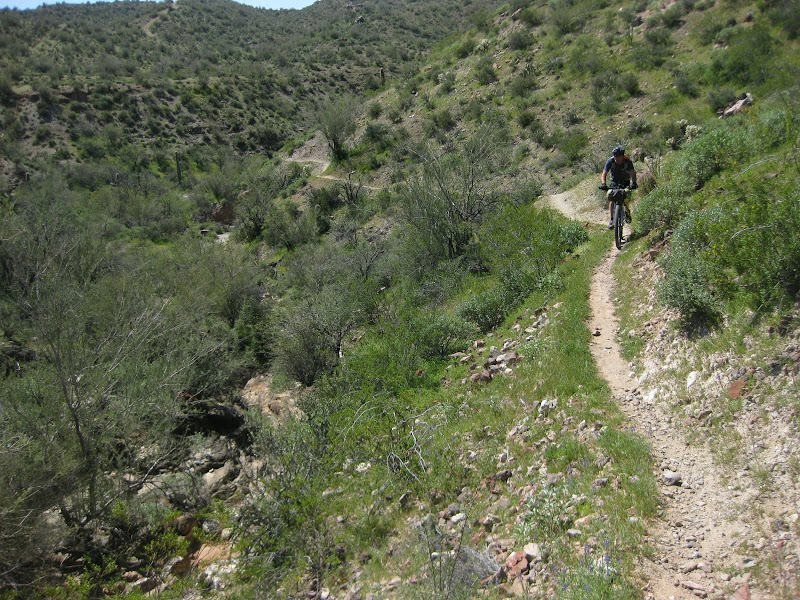 As we passed Table Mesa and continued to Black Canyon City, the views only got better. 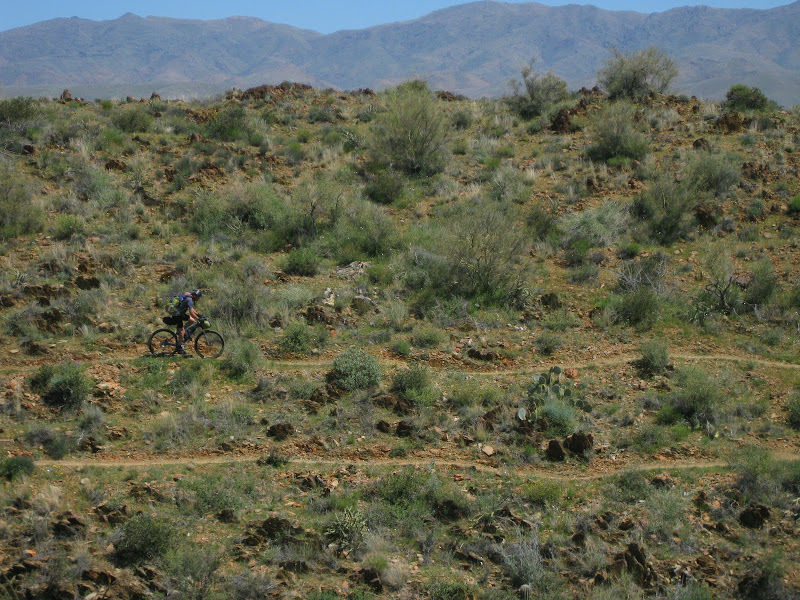 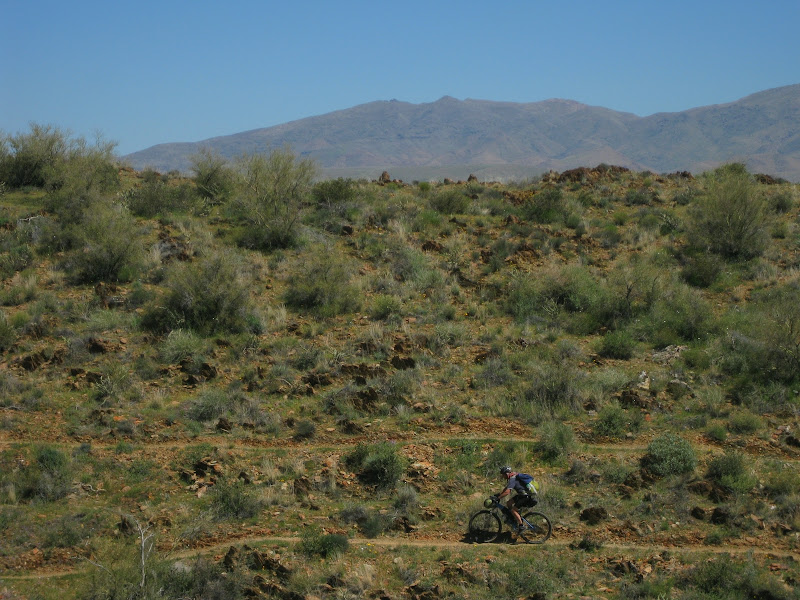 Easily my favorite part of this trail...this trail was built with mountain bikers in mind, quite possibly the best bikepacking trail I haver ever ridden 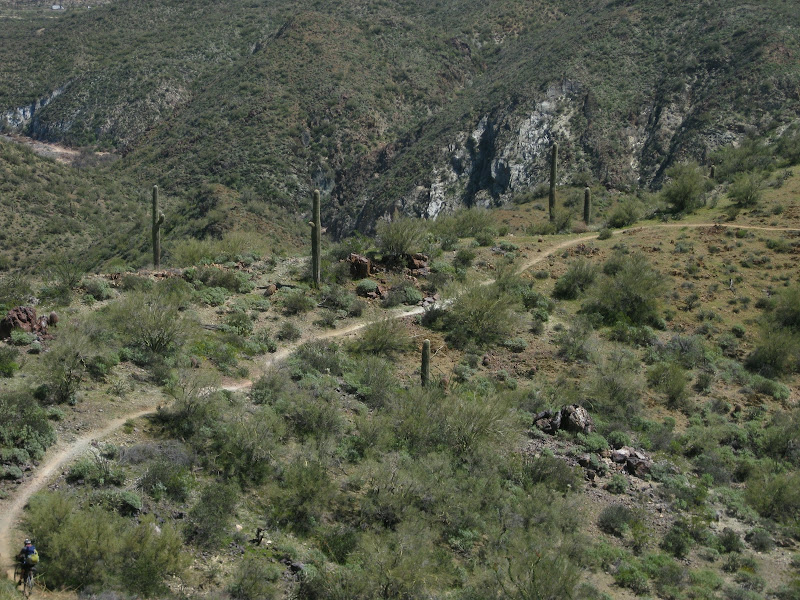 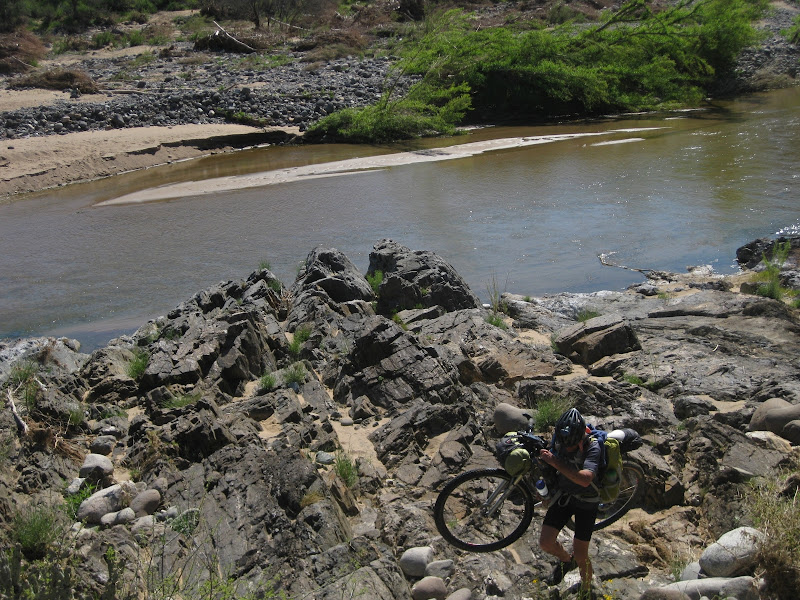 the .1% is the 4 river crossings that were flowing pretty well.

Lee had a near bonking moment while we were close to Black Canyon City; he insisted we head into the Chevron, a mere 2 miles off-route, as the temperatures began to get in the mid-80s. 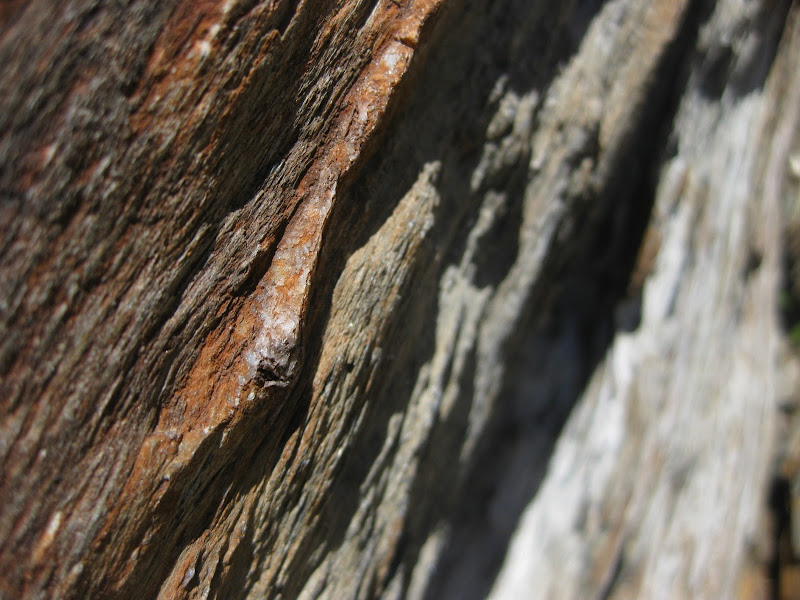 A zoomed in version why this place is so special...the rock work that they went through to build this trail is stunning. 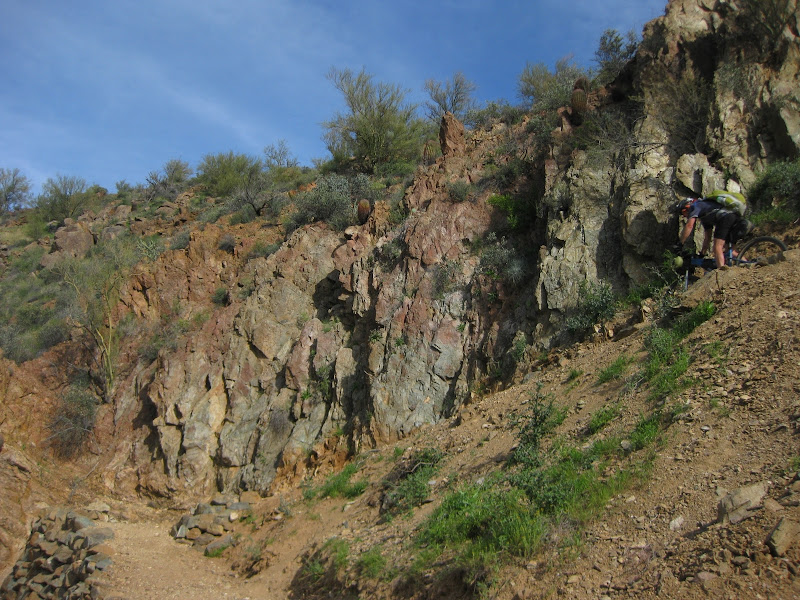 You can see it on the side of the trail nearly every mile as you ride it. 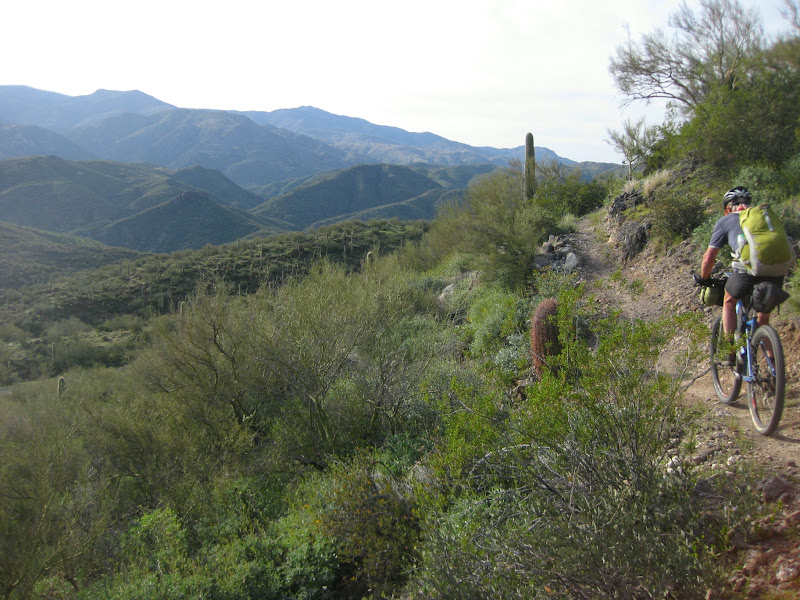 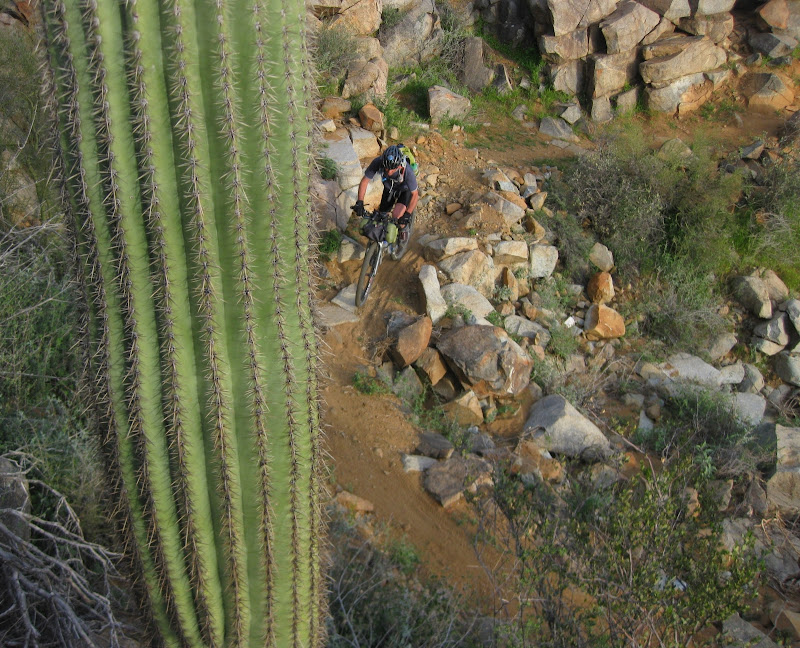 Massive stones were layed down to create symetrical stream crossings that look like pathways. 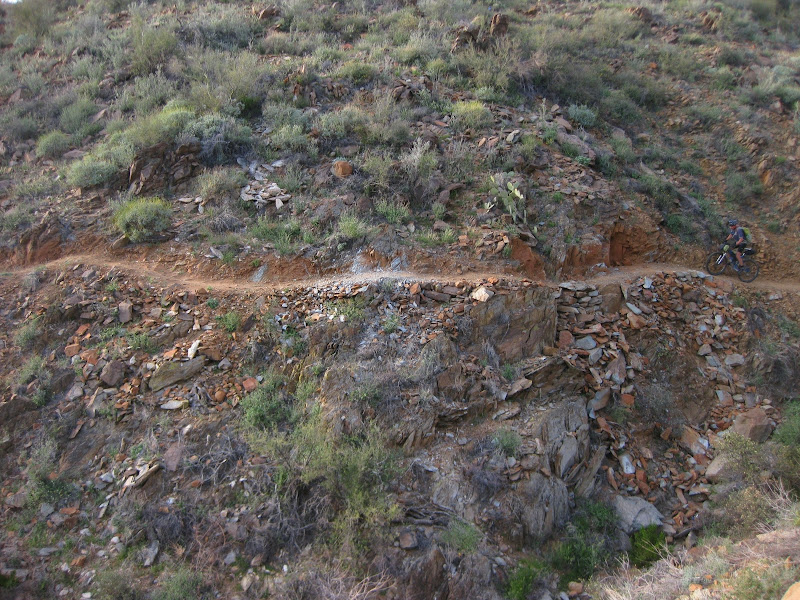 Frankly, this trail is a bikepacker's dream. The trail builders were artists and their final work, well, it is a masterpiece. If you ride this trail in a day from south to north, you will ride away in awe of the length and work into building this trail. 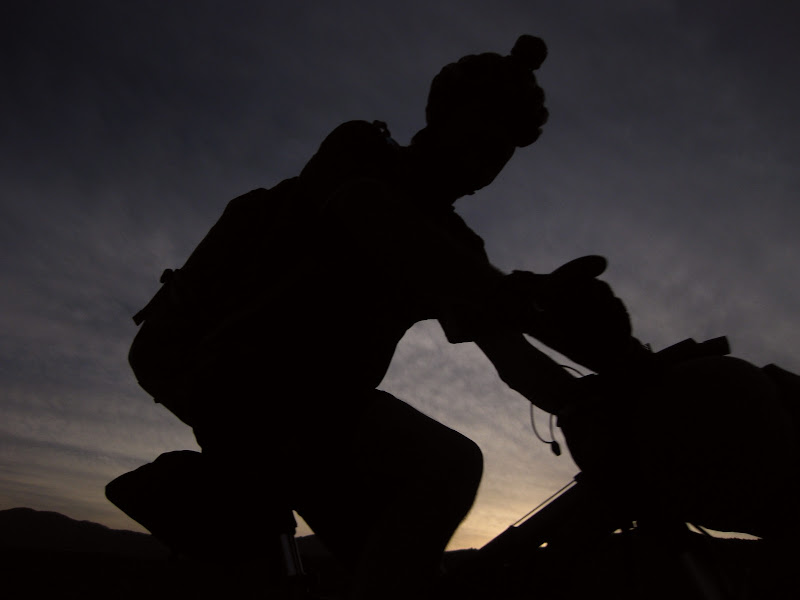 That night we slept just before the singletrack ends at the Crown King Highway. Just a few mosquitoes buzzed around at sunset before complete silence fell over the night sky. Ahhhhhhh, complete silence and a full moon sky.

In the background, Sunset Point could barely be seen. Many a days I have passed that rest stop pondering to myself..."Is there riding over there in the Bradshaws?" That question would be answered the following day of the BCT-Bradshaw.

Do you have any recommendations for camping between Table Mesa and Black Canyon City? Thanks!!

Some great photos. Would you mind if I shared your post on my web site, www.sonoranmtb.com? We are an outfitter of MTB tours on the BCT.