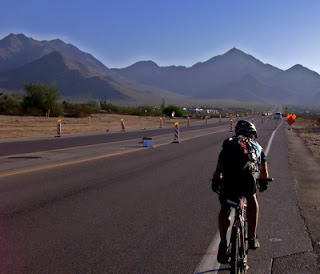 Picture of me heading to climb the McDowells (in the background)

The race: We all started out with a short jaunt to the T100 course. I was up in the pack early, but some weird chain problem forced me to dismount and get to the back of the pack. After we passed some joggers, I decided I should try to move up to the front of the pack. The section with the old man critiquing was classic. Troy managed to clear the entire section while I was hiking my bike behind him. The old man belittled me, "Why did you get off your bike, that guy made it up [pointing to Troy at the top of the mountain]." I passed a few guys and saw Dara in the distance. Thought it might be one big group ride until I saw two guys on the side of the trail.

Chris and Doug had a flat; asked them if they were ok and moved on. I then managed to go a different route at which time Troy yelled at me: "Dude, dude, dude" is what I heard as I looked down at my GPS and realized I had gone off course. The Flagstaff crew (Troy and Dara) stopped at the T100 parking area as I continued down the bike to find Brian looking riding and glancing back at me.

Brian and I rode together. After reading the MTBR postings about peeing in races, I decided to try my luck at peeing on the bike. Spelling your name is hard, so I just decided to not get any one me. It worked. John and Yuri, glad you saw my mark.

Near the wood plank at the canal, we saw Scott looking confused. I looked around and saw another route down the steep, rock embankment. I took and rode ahead. We rode together until the start of the McDowell, where Scott and eventually Brian left me behind. I periodically would catch up to Brian when he had a question about the course. Chris C. (fetish bike) caught me on Sunrise and we rode to Dixie Mountain where I flatted. The flat took me sometime to change.

The descent of windgate was great trail; passed Chris C and gave him a tube. Had some major GPS problems on the road out of the McDowells and was forced to use the cue sheet, but by that time I was completely lost. I glanced at the GPS off and on, hoping it would bring the track back up but never had any luck. Stopped at a juice and coffee bar to ask for directions and juiced up. Also, watered up at the Arizona Falls and had to eat some Gu.

Got back to Yuri's house and was greeted with taquitos, brots, beer, veg lasagna, and some good salad. Mmmmmm.

Great route. Great race
Big thanks to Yuri for the race and hospitality. 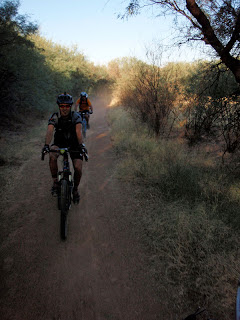 I gotta try that pissin off the bike thing.
See ya next weekend.

Looks like a fun time. I've only peed on the bike while doing a roadie double century. I actually did it on the bike path along the beach just north of Oceanside. Didn't want to lose the lead group and ride on my own, and even better it was a rainy day so my poor marksmanship didn't matter.