Next race is this weekend, up in Phoenix. Yuri put together what looks like one of the best races this fall... the Phoenix Endurance Experience.

A free 88 mile (7192 ft. of climbing) ride departing from Phoenix and encompassing single track, double track, canal paths, bikeways and roads within the confines of Phoenix, Scottsdale and Fountain Hills.

Meanwhile, the Arizona Endurance Series has add another race to the schedule (due in large part to Scott M and some chatting with Jeff Handy). Here is some info on the APC:

When: January 27th at 7:00 am
Where: The Station, in Oracle, Arizona
What: Antelope Peak Challenge, an endurance mountain bike race

Down the Arizona Trail and over to the Old Pueblo 24 hour course. The ride is somewhere in the neighborhood of 72 miles and approx 8500 feet of climbing. Sounds like fun, eh?

The nice 3-D map courtesy of Scott at Topofusion.com

And the profile of the climbing 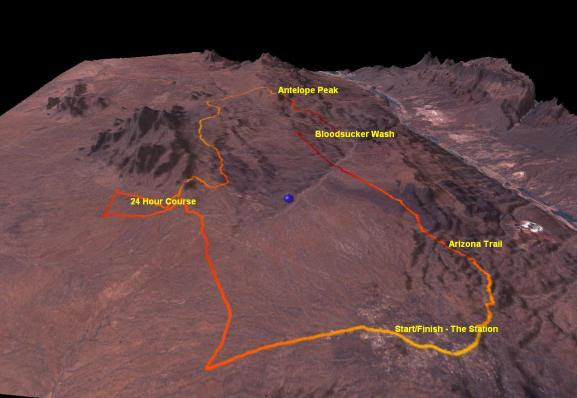