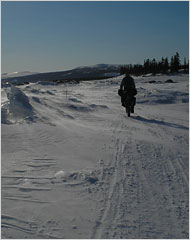 In nine years of racing, only 28 men and 2 women have completed the full route to Nome, including Tim Hewitt, a lawyer from Latrobe, Pa., who reached the finish on foot in 2001, 2004 and 2008. About 90 percent of the entrants have dropped out along the trail.

Only seven racers have registered for the 2009 contest, including Hewitt and Basinger. Partly to generate future entries, the organizers have continued to operate a simultaneous 350-mile race ending in the village of McGrath, about a third of the way to the finish.

Watch the video from NY Times on the Idita-Bike.

Read the rest of the article.