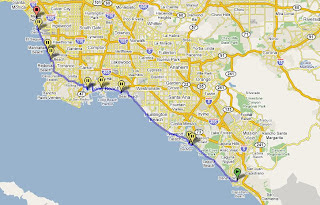 I slept in until about 7am and had a nice cup of coffee out on the patio with Kacy's family. Their patio looks over Dana Point. Manuel rides his bike 2-3 times a week around Dana Point and swims on Mon, Wed, Friday with his wife Carol. We chatted a little bit about touring and the route that lay ahead of us. Although I have been biking for a number of years, this is my first tour trip. It was great to talk to someone that has been doing this for over a decade. 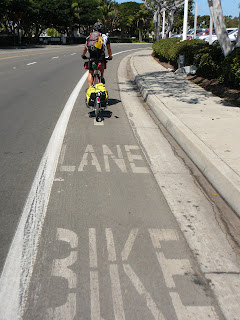 Bike path outside of Newport Beach


We left a little later than I had hoped. Manuel and Carol were so hospitable. As a parting gift, they wrapped up two pieces of chocolate cake and two forks for the trip. Since L.A. has few campgrounds, we planned to stay in a hostel in Santa Monica. Huntington beach was few hours away from Dana Point. Huntington and Redondo Beach had two of the best bike paths during the entire trip. Before reaching Huntington, we stopped in Newport Beach at the Harbor House Cafe for a some lunch. The turkey sandwich with spinach was amazing. At about 1pm, we passed through Huntington and pressed on to Long Beach. 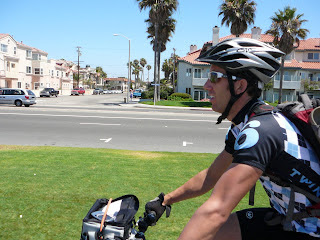 
The hardest part of the trip was going through the refineries of L.A. to get to Palos Verdes. The small bike lane coupled with the 18 wheelers made of a little of an unpleasant biking experience. In addition, the view was less than appealing. We took some back roads to get off of the highway in and around Wilmington. At 330, we stopped at a gas station to refill on water and Kacy bought a GU packet. The high in L.A. was 107 degrees. The attendant in the gas station asked us if we were doing a competition. I guess we must have looked pretty official. He was a little surprised to see us and even more surprised about the entire trip.

A few minutes down the road, we took the bend into Redondo Beach. Redondo, Hermosa, and Manhattan Beach have some of the nicest bike paths and beaches. We stopped in El Segundo to call the hostel to inquire about reservations. One of the biggest challenges I had with pre-planning the trip is knowing how many miles we would do each day. I had a tentative plan, but I was unsure if we could meet each tentative mileage. It turned out that I underestimated most of the trip. There were no empty dorm rooms, we we decided to just get a hotel when we got to Santa Monica.

We got to Playa Vista and Marina del Rey at 5:00 pm and decided to get a hotel at the Jolly Roger Hotel. We sat in the jacuzzi for 15 minutes, showered, and went to eat at C & O Cucina, a semi-upscale Italian restaurant next door to the hotel. I tried an Italian beer, Dreher (owned by Heineken). Dinner was great and the beer was even better. Immediately after dinner, we headed to bed.