Ride Around The Santa Ritas (RATS)

It has become sort of an unspoken tradition to do (or at least plan) this ride every year. The first year was nothing less than a beat down. Check out that last picture of Max Morris spread out on the ground after the RATS ride back in 2008. This ride has become somewhat of a gauge for me to see how well I am really doing on the bike.

I got a nice wake up call at 4:15am from Max to meet him for breakfast. Biscuits and gravy, scrambled eggs, hash browns, toast, and coffee; these are all the things needed for a 12-hour day on the bike. After parking the car at the intersection of Box Canyon and Madera Canyon, we set out under the moonlight, with a light tail wind. 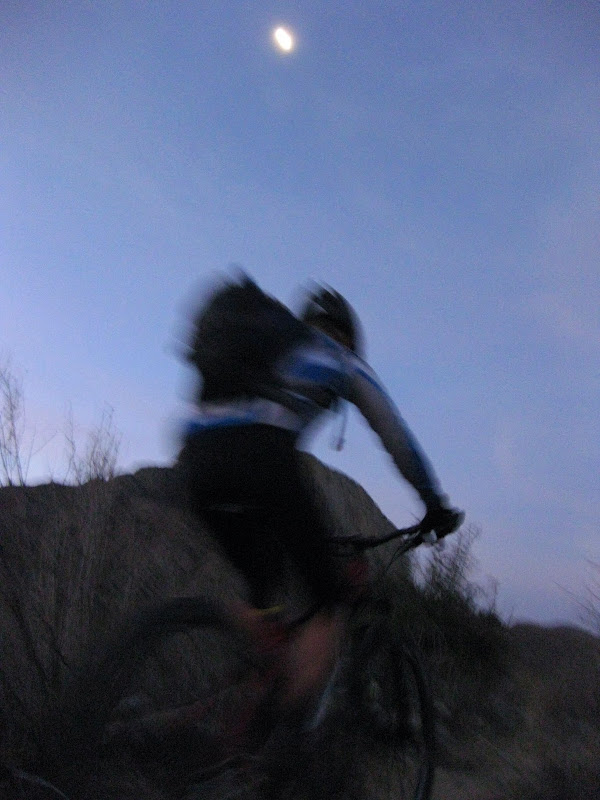 I love doing these 10+ hour rides on the bike. After doing a handful of said rides a year, I know just how my body reacts. First, you carb load in the morning. Then, reality sets in, so my stomach begins to do an awkward combination of butterflies (nervousness, maybe) and giddiness. After I begin pedaling, my legs begin to ache for the first 2 hours as I begin to warm-up. Does this happen to anyone else doing these big rides? 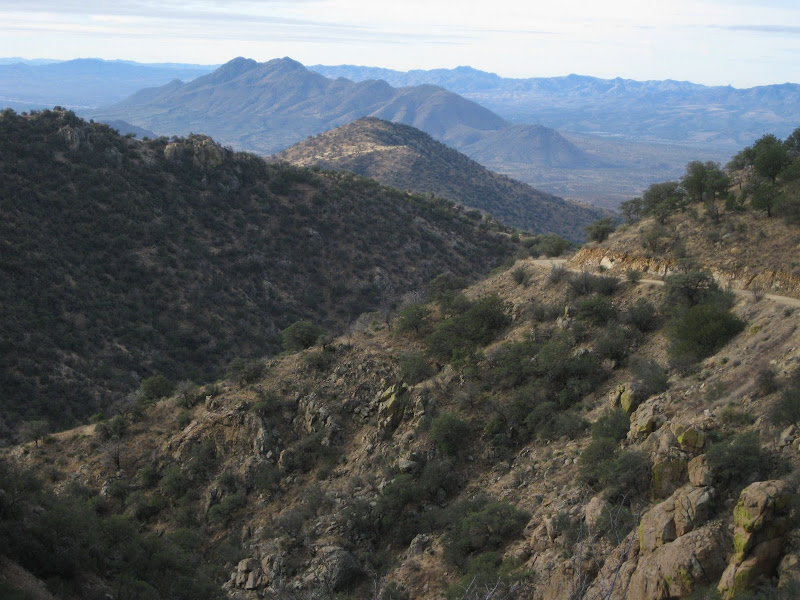 It was a similar start for me this year. The entire time climbing up Mt Hopkins Rd, my legs ached and begged for some relief. No such relief with Max off the front. I tried to keep up as he sped ahead. No luck. Max was ripping it up. 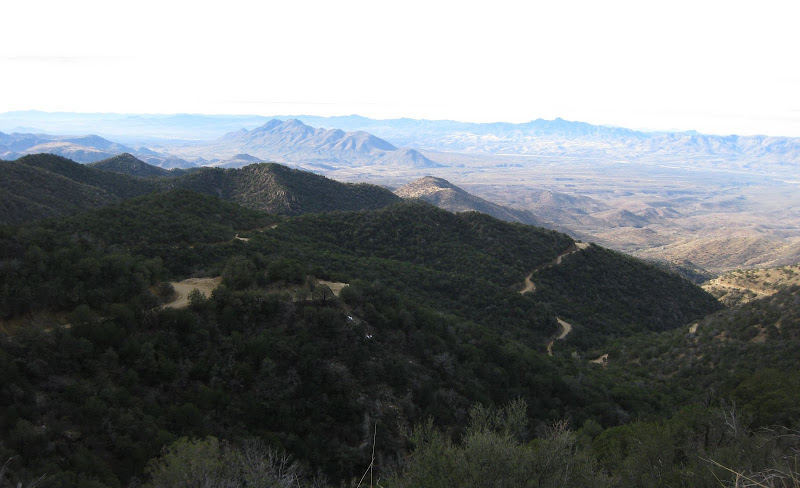 Nearing the top, we rested to take in some of the views. This one looking southwest toward Rio Rico shows most of the climb up (far right, middle). 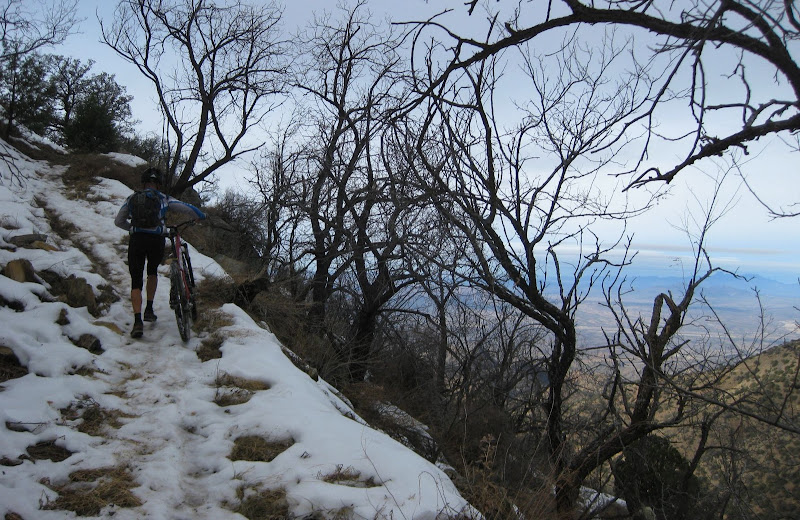 Greeted by singletrack and snow, my legs were slowly beginning to wake up. Things got interesting after the snow. 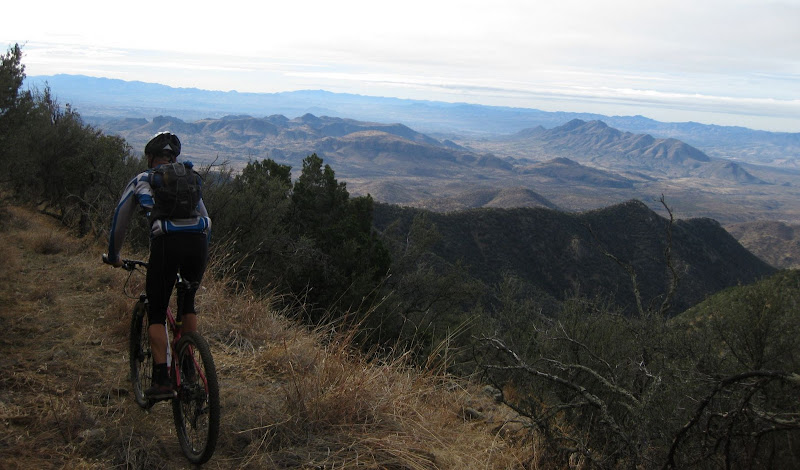 Steep...that is how I sum up this ride. There was a recent thread on TucsonMTB.com about the steepest climbs in the Tucson area. A few of these climbs were mentioned multiple times. If Max was beating me on the climbs, then I was going to leave him on the descents...and so, that is how the day continued. Max would jump ahead on the climbs, and I would catch up with him on the ascents. 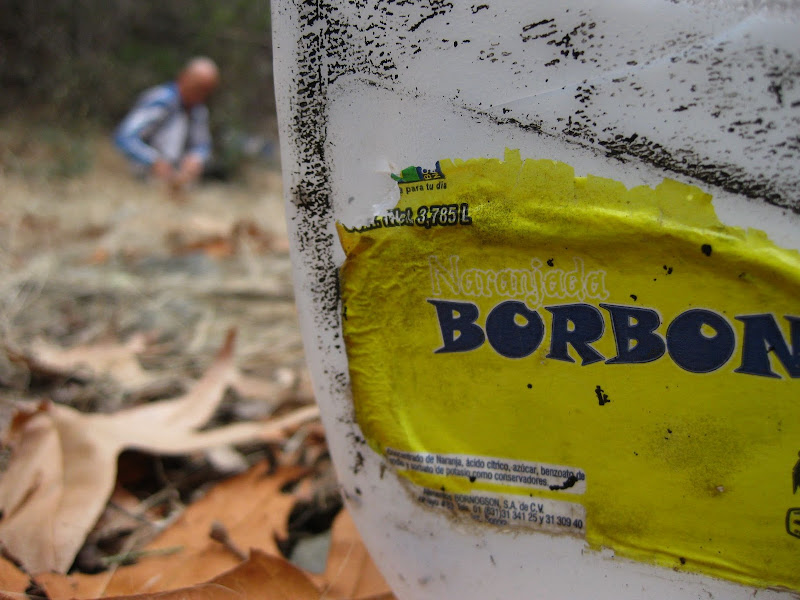 The big unknown was some of the "immigrant trails" that are used to connect the dirt road. The condition was, to our dismay, very poor and mostly unrideable. It made for about a 45 minute hike-a-bike. There were some signs of some recent hikers, like this "Naranjada Borbon" that intrigued me. It does not take a Spanish teacher to guess what that translates into. 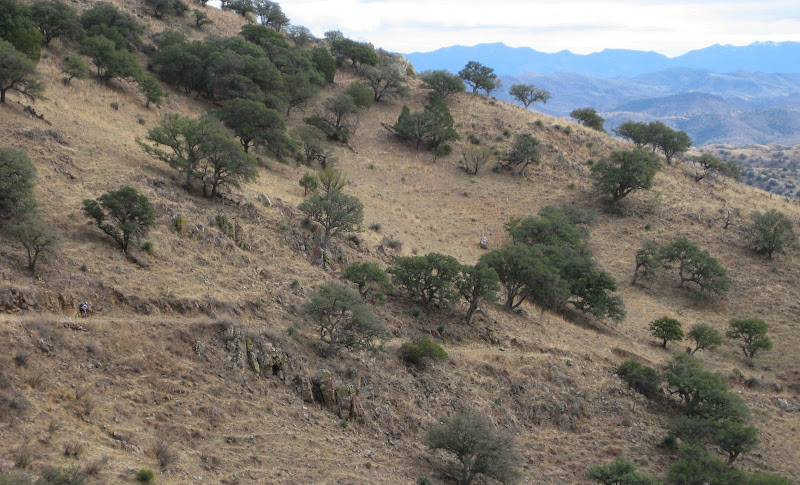 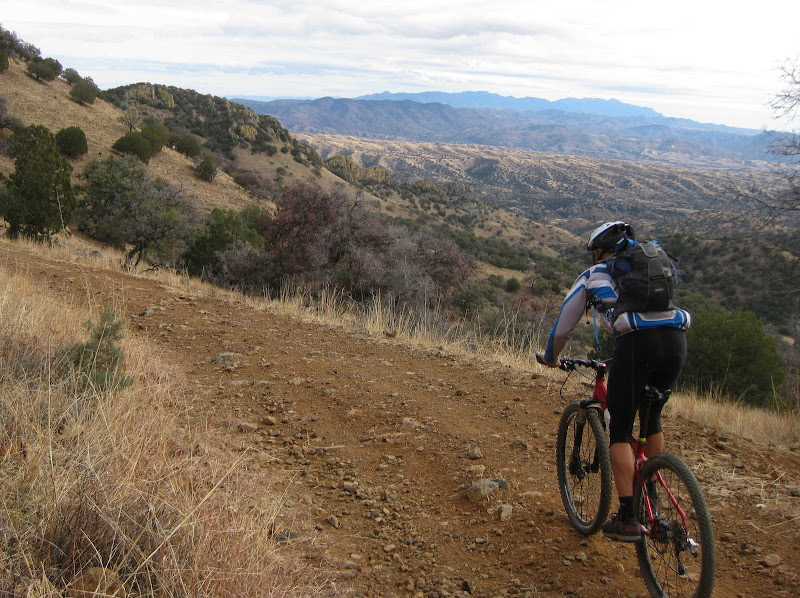 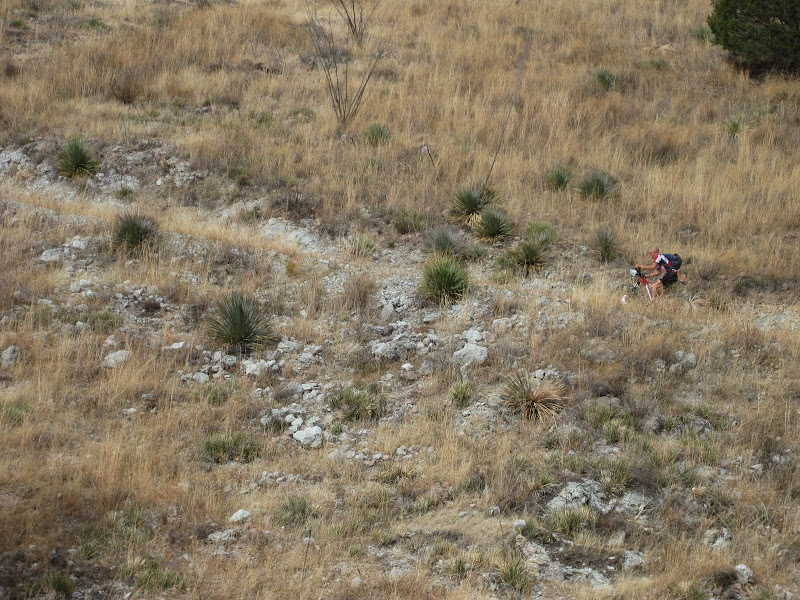 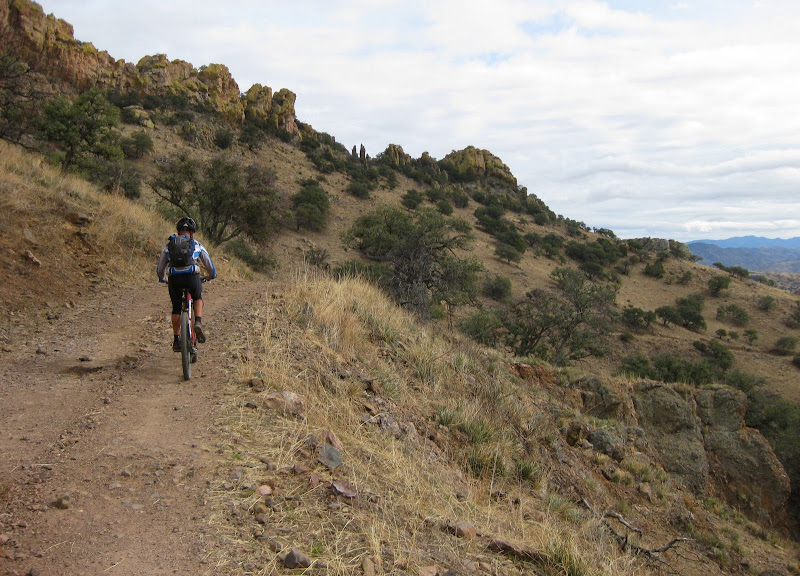 and climbed down. Repeat process until you have around 13,000 feet of climbing. 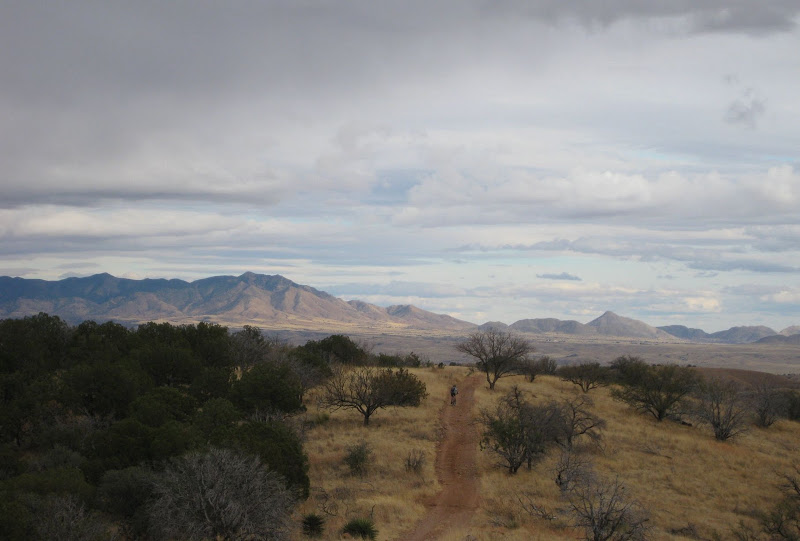 As we neared Kentucky Camp around 3pm, that 20% chance of rain seemed like it was creeping up. The temperature dropped and clouds begin to accumulate. For the next 2 hours, we got a light rain, just enough to make it necessary to wear arm/knee warmers. 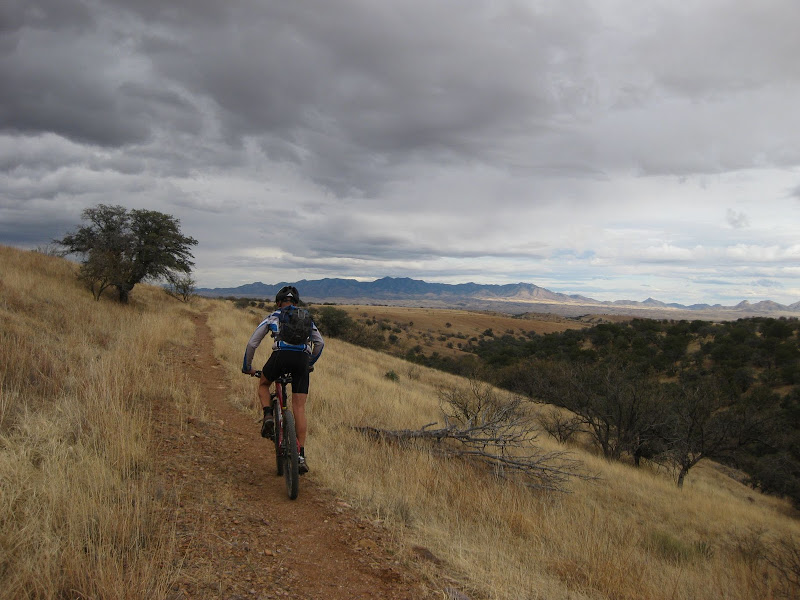 Previous rides have all pointed to a 12-14 hour finish. The plan was to rest as little as possible and ride at a descent pace. The Kentucky Camp AZ Trail contoured singletrack went by in a flash. 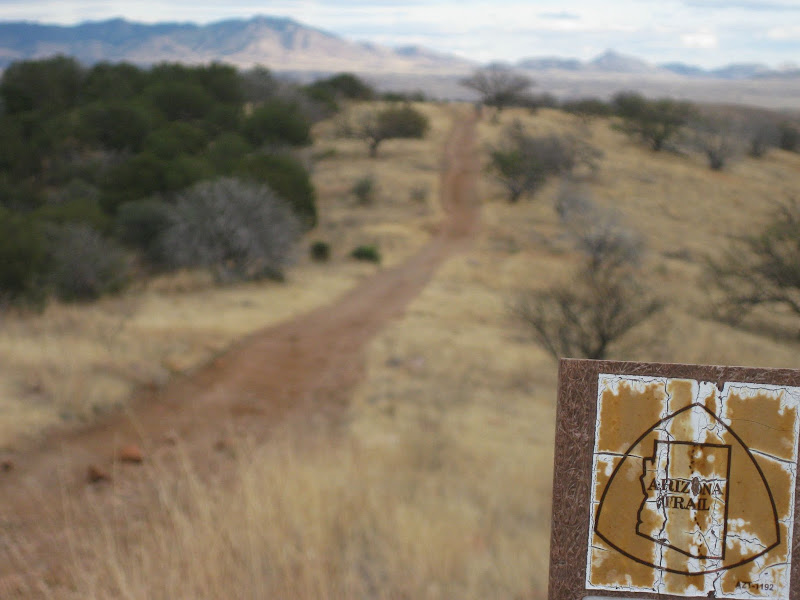 11 hours, 20 minutes later we got back to our car. No mechanical, about four 15-minute stops and a descent pace contributed to the faster than expected pace. At days end, it was a beat down on my body. Although not in the shape that I want to be in, I am happy that the hopeless "survival mode" was never needed. The next couple of weeks (APC and Tortolita) should help in getting me back to where I would like to be with respect to fitness.

My hardest bike ride was 11,000 ft in 104 miles. I felt weak for the first few thousand feet, felt stronger for a while after that, but entered solid death march territory for the last few thousand feet or so. Completely worth it though.

Great pictures. And a ride like that in January - how could it not be fun.

i like this blog.......
Strategy & Consultancy Jobs | Careers & Recruitment at Jobscharger.com
http://www.jobscharger.com/JobIndustry/Strategy-Consultancy-36-.html