It has been a few years that I have been vacationing in northern San Diego. Over the years, I have slowly been accumulating several connectors to the reserves in the area. With all of the dots connected (see here for previous rides), Collin and I set out to do the 60 mile loop. We started out on San Dieguito Path, right out the back gate of the house. The weather was beautiful, temps were perfect for a long ride. 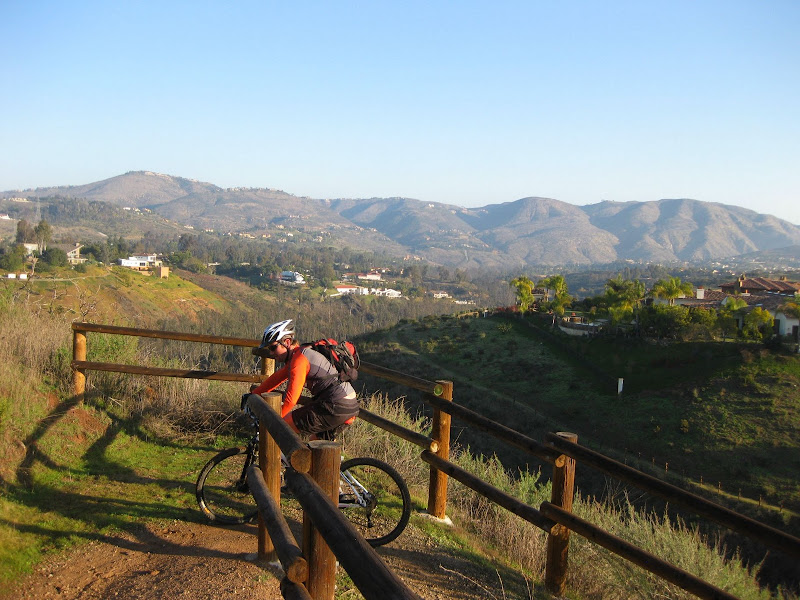 This section of the loop was inspired by the Archipelago Ride that is done every year. 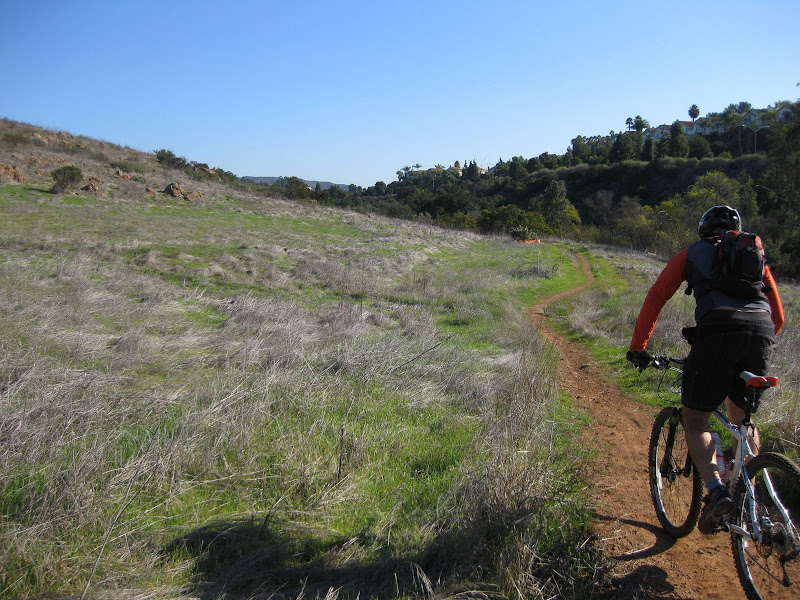 The route winds its way to Black Mountain and later Los Pensaquitos. 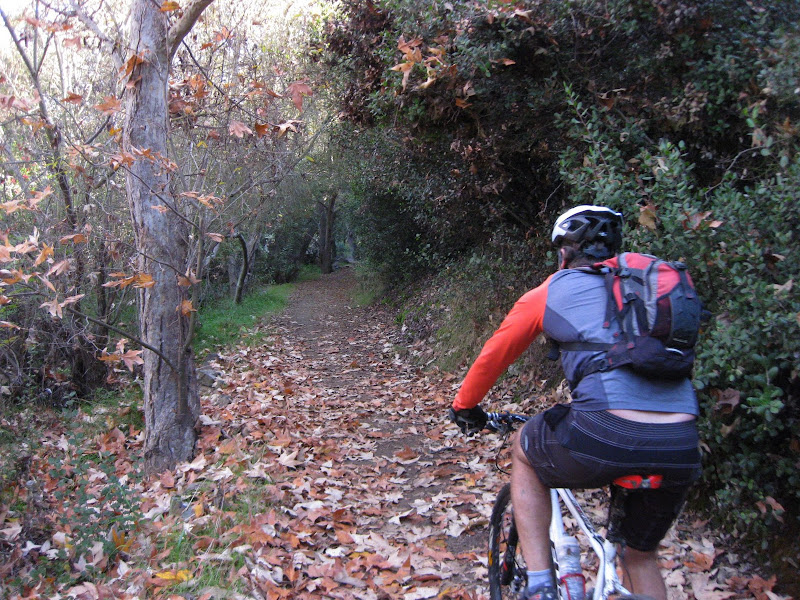 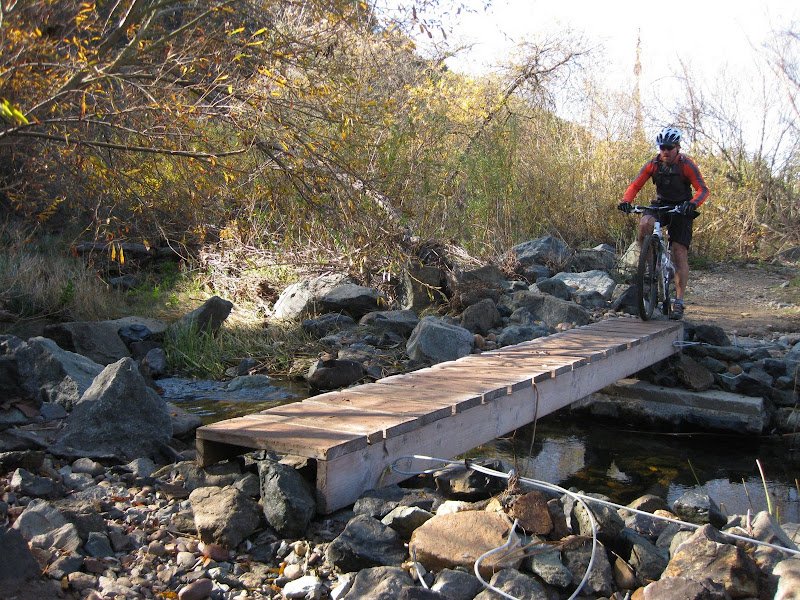 Collin's longest ride before this loop was the 4-hour, 30 mile Kentucky Camp loop. Doubling that longest ride would prove to be super challenging. We were moving at a fast pace in the morning, but that was slowly slipping as the telephone line trails began to get steeper and steeper. 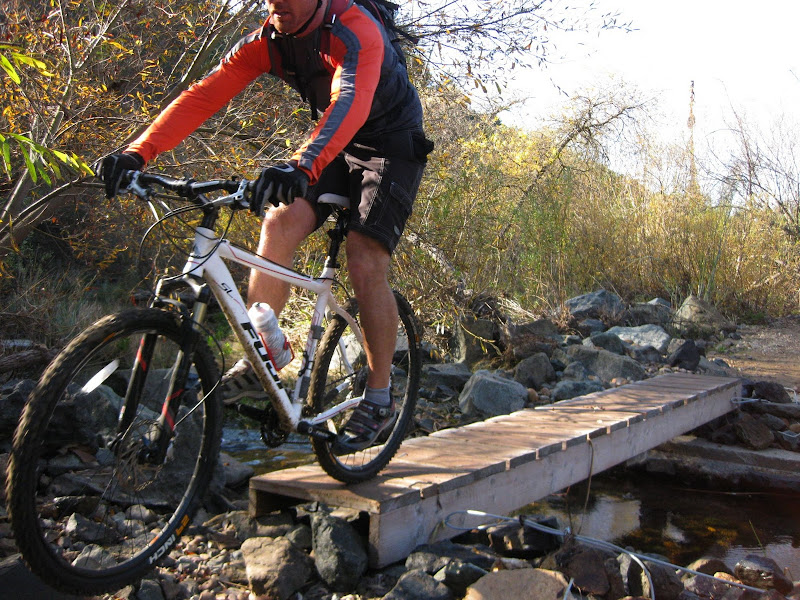 Los Pensaquitos is part of the the 100-mile Sea to Sea (Del Mar to Salton Sea) that is used a multi-user trail. It seems that some of the trail is hard to find and rarely signed. 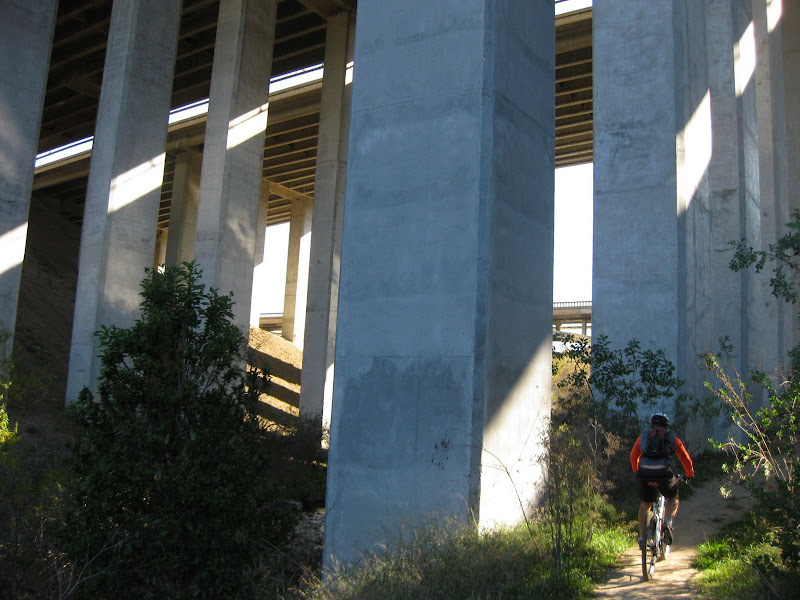 The trail continues toward Poway, going under Interstate 15 (shown above) and continuing on toward 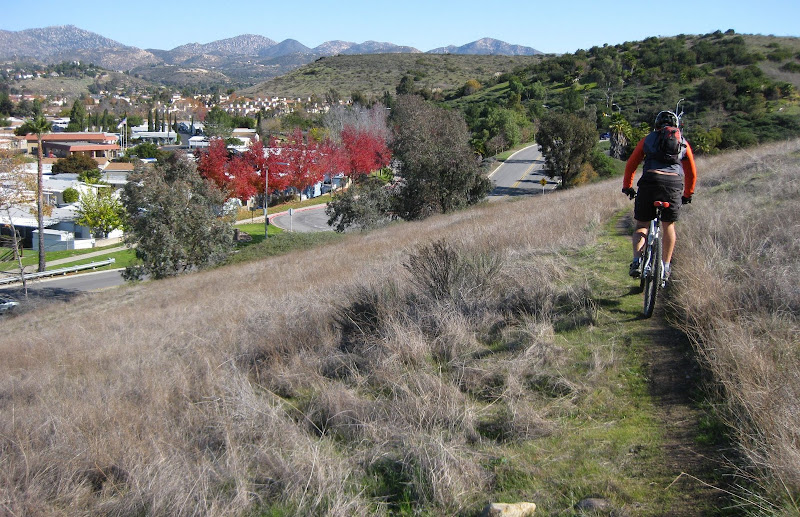 South Poway Trail. It was at this point where we had to decide to take the highway up to Mt Woodson or continue on the unknown South Poway Trail. Due to the amount of climbing ahead, we decided to take the easier road route. We continued up Poway to Highway 67, skipping the out-n-back on Iron Mountain. 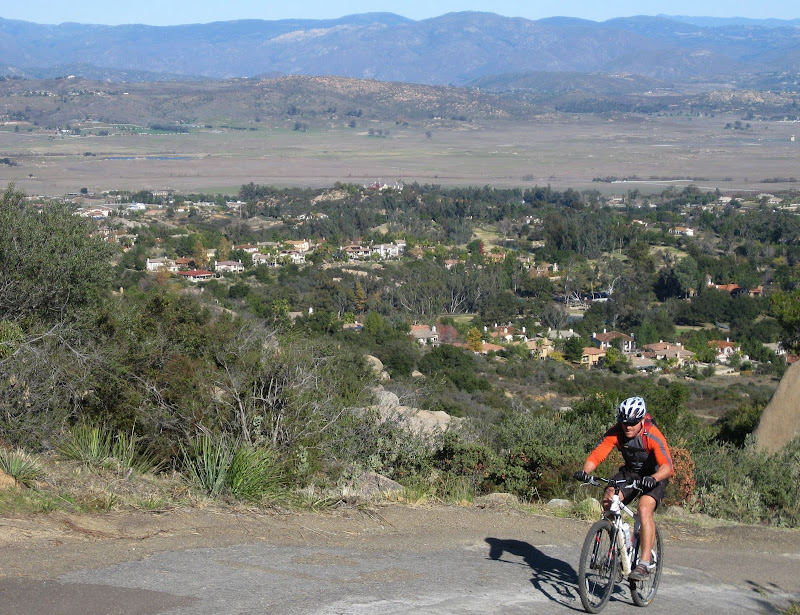 We climbed the backside of Mt Woodson. This is the section that I had never ridden. Information on Mt Woodson calls it a technical wonderland for mountain bikers. I was not quite sure about the front side of Mt Woodson until a hiker asked us if we were going to "descend that steep trail!?" I answered affirmatively. His response made me a little gitty, "You are going to have to walk a bunch, there is no way you are going to ride all of it!" Ahhhhh........sounds like the perfect way to descend a mountain. 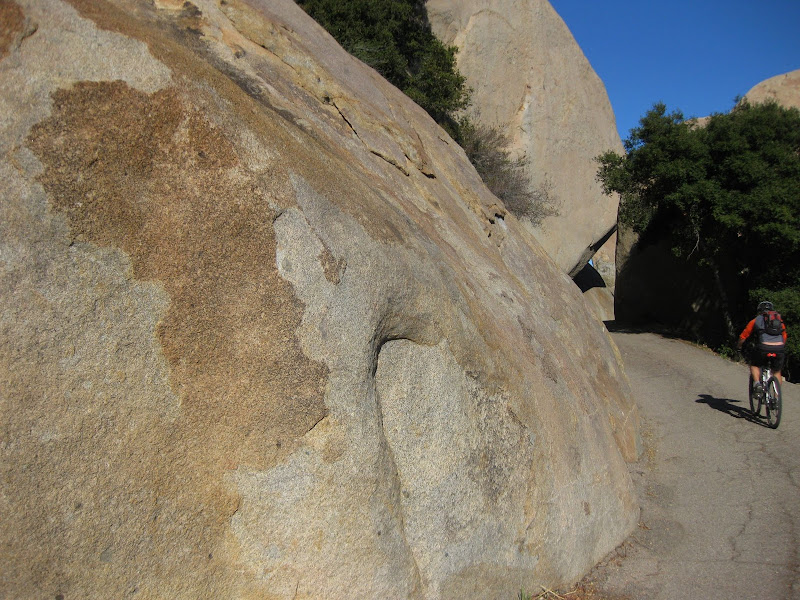 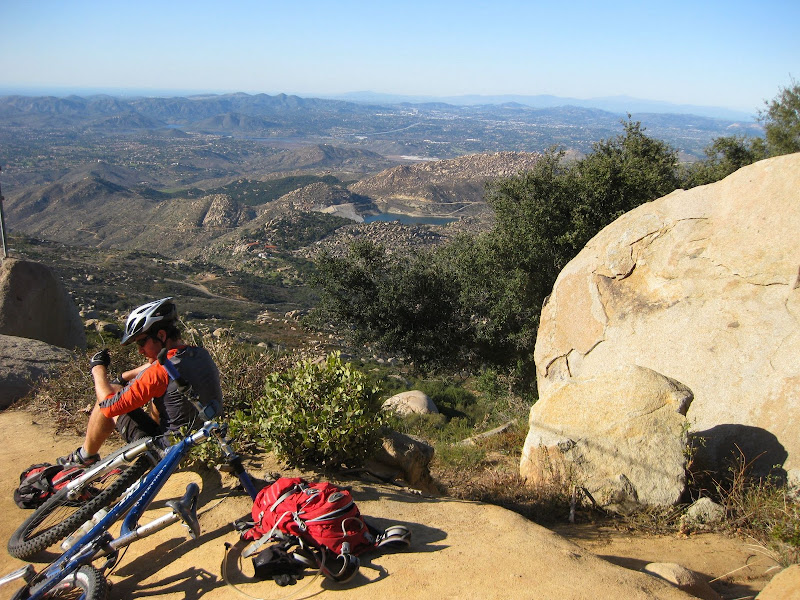 The hiker could not have been more wrong...the tight switchbacks and water bars were a perfect switch from the mostly double/singltrack that this loop has. Singletrack bliss! Shouts of joy were followed by slow switchback moves, even an occasional impressed hiker commenting, "I cannot believe you are riding down this" or my favorite, "How did you guys get up here!?" 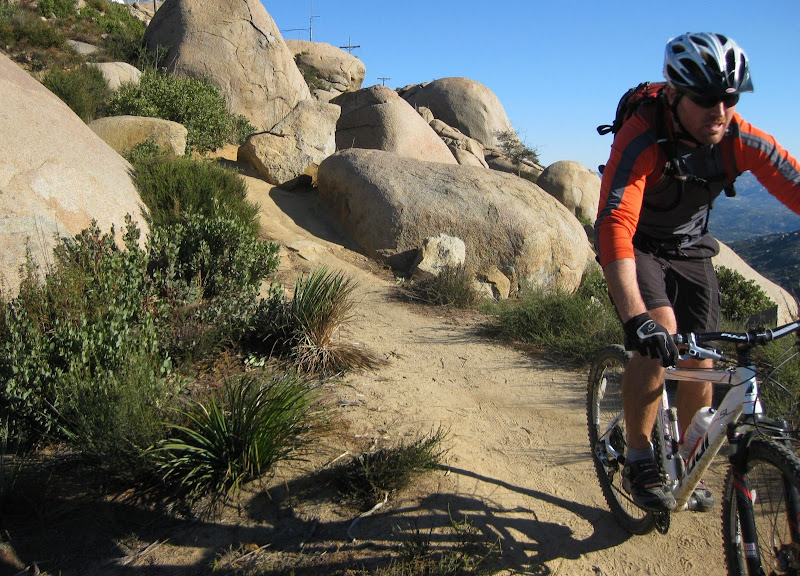 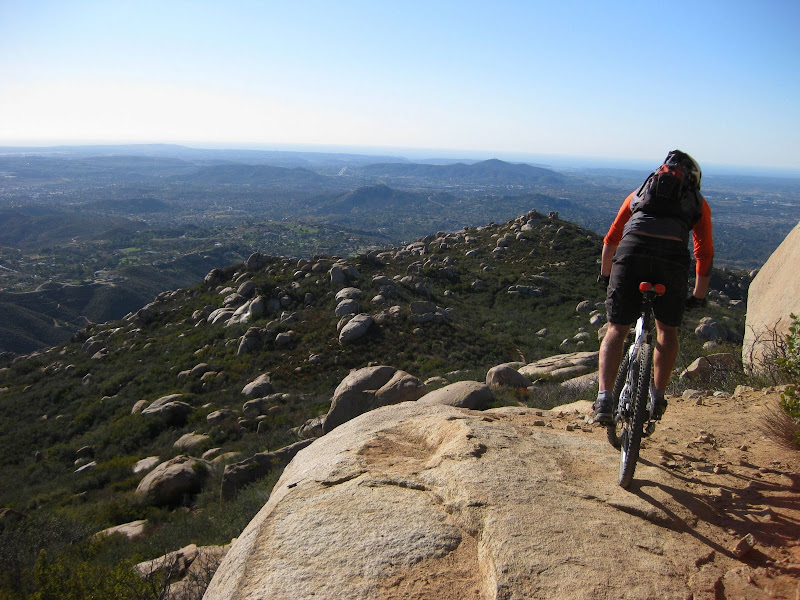 The option to go down a trail called Fry presented itself, but the left option seemed steeper. 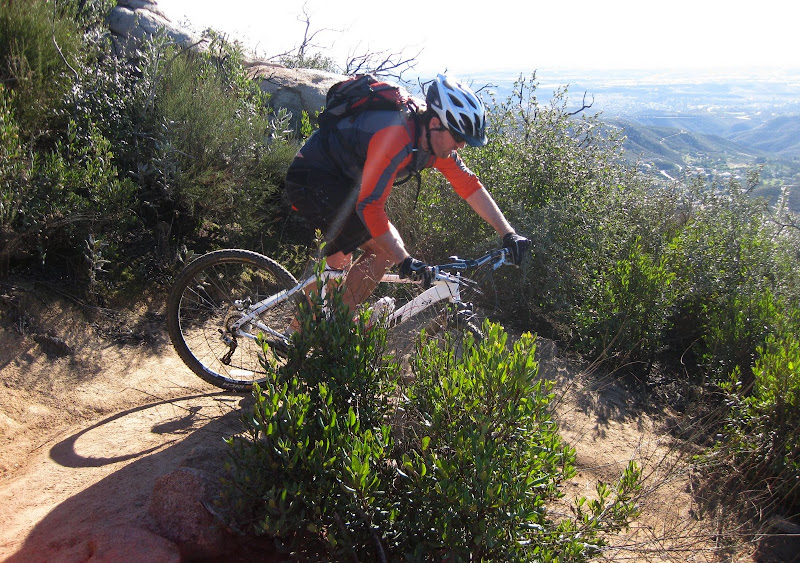 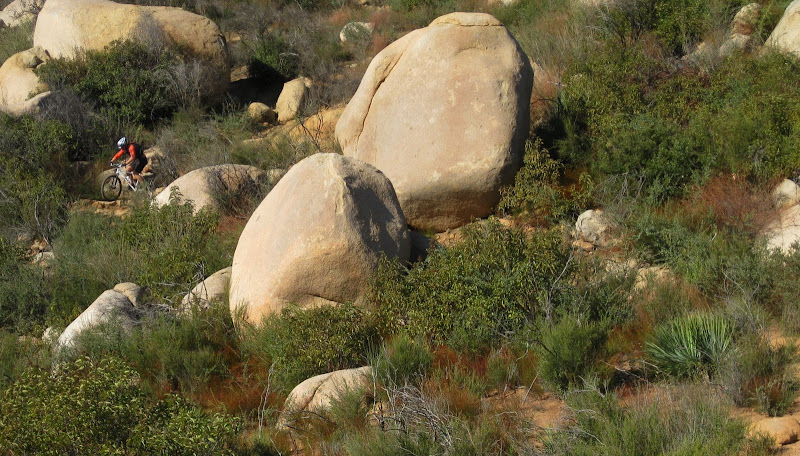 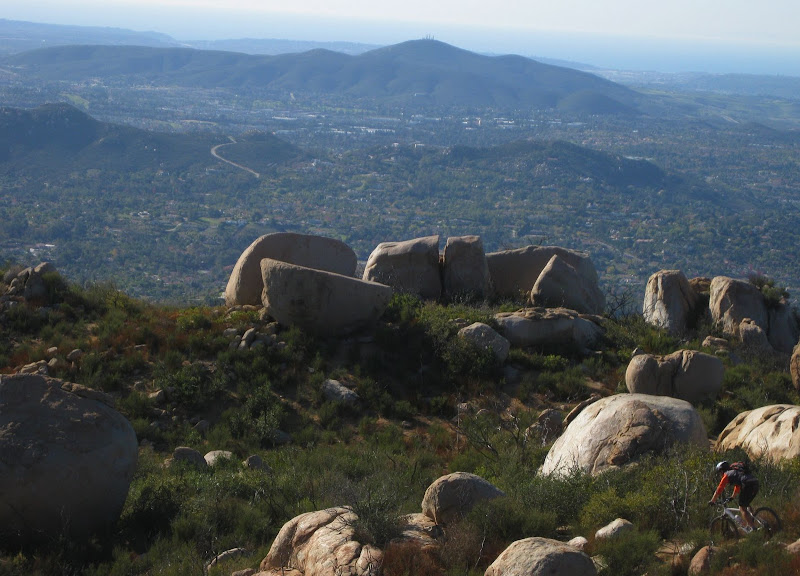 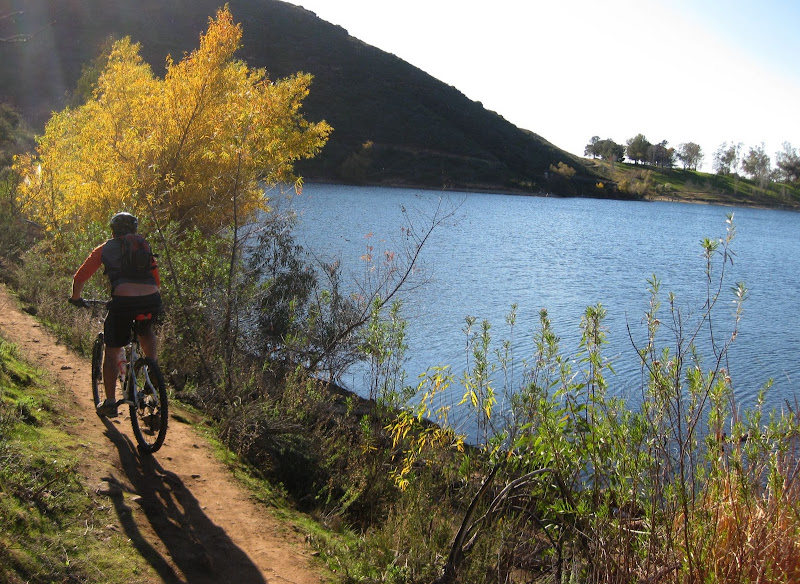 At the bottom of Mt Woodson, we quickly rode through Poway Lake Trails and over to the Espola Rd.Having just descended some singletrack, I was high on life and we picked up the pace. 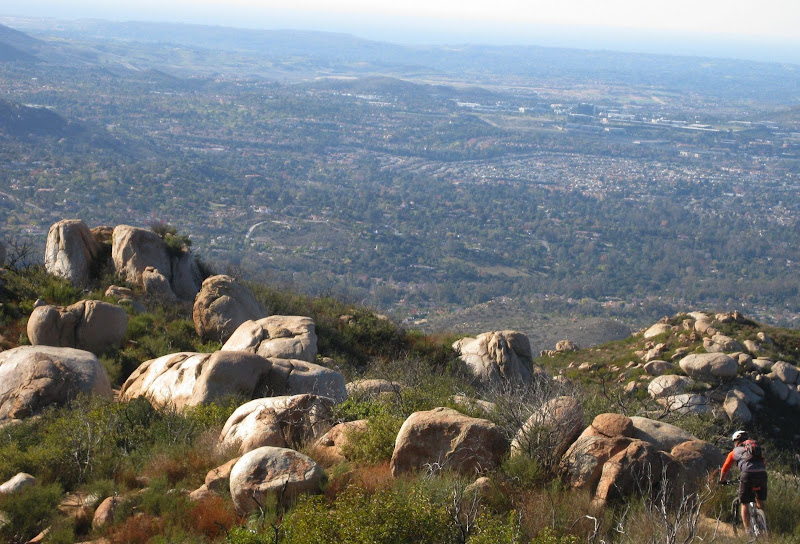 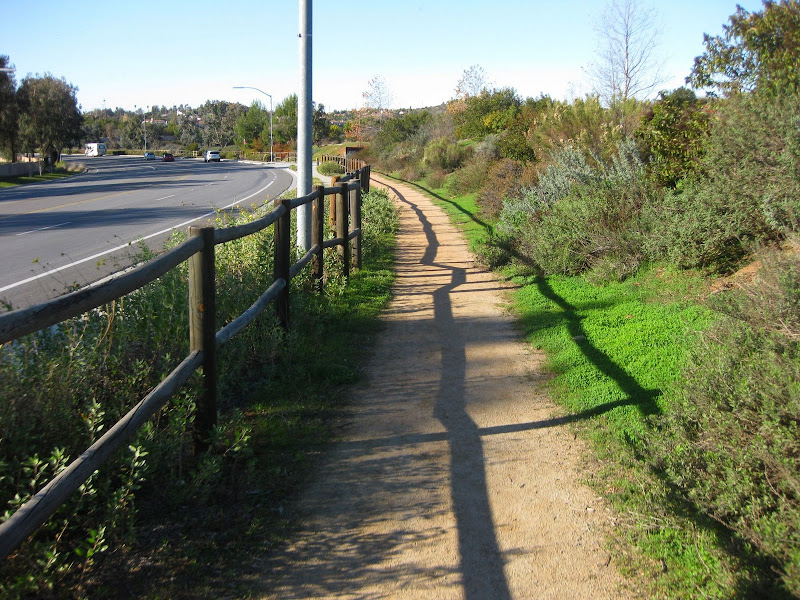 We stopped at the Circle K on Rancho Bernardo and I15 to buy some snacks and gatorade. Collin had an dinner party to attend, so he went straight to cut off some miles. I would continue straight to finish the loop solo. We made a silly bet to see who could get back to the house faster. 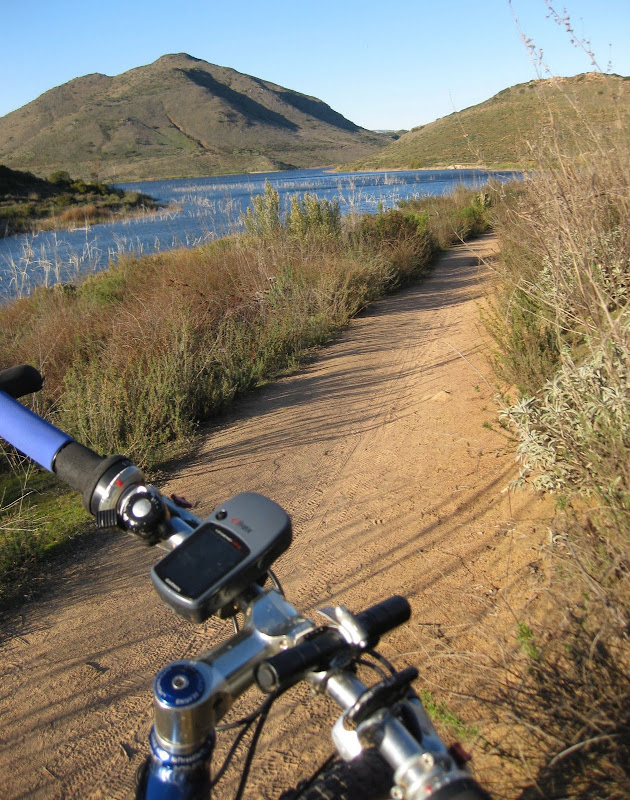 Twisting around Lake Hodges on singletrack was a great way to get closer to the finish off the loop. I put my head down and pedaled fast. 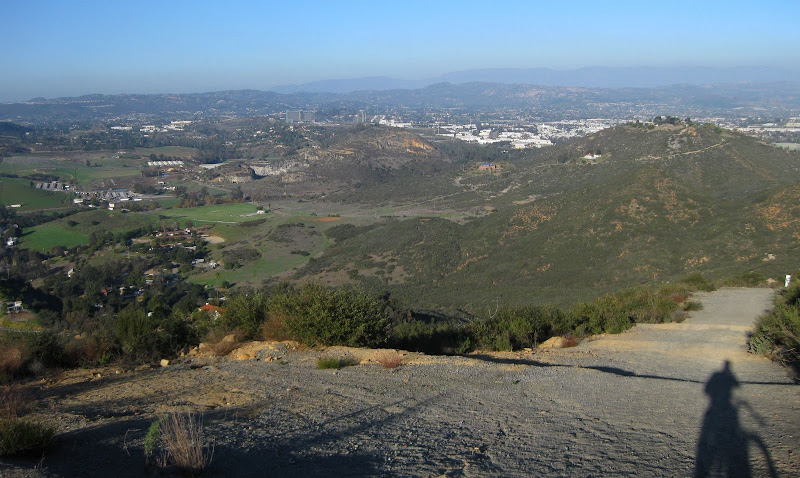 We finished the loop at roughly 8.5 hours, 7.5 hours of moving time. Topofusion says that there is about 7500 feet of climbing for the entire 60 mile loop. It was a fantastic loop, Mt Woodson being the highlight.

If I were to do it differently, I would have continued on South Poway Trail to Highway 67 and try to scout out a way to get from Iron Mountain to Mt Woodson. Also, I had previously scouted out a way to get away from using Espola Rd by using the trail that connects Hodges with Mule Ears, Old Coach (Maderas Community). I think that would make this a classic loop.


Any other suggestions from anyone that knows N. San Diego? Click here to get the GPX file. 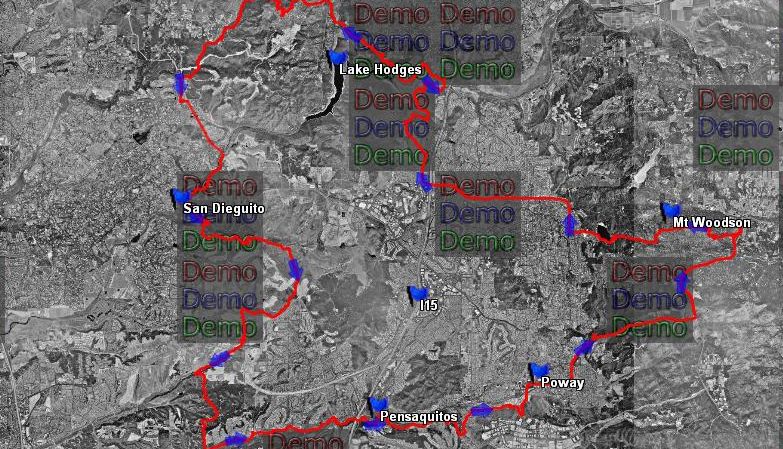 Great pics! My husband and I just did some great hiking in AZ!!

I must say that overall I am really impressed with this blog.It is easy to see that you are impassioned about your writing. I wish I had got your ability to write. I look forward to more updates and will be returning.

Just came across your blog. I envy your trails there in the US. They run forever and they are so scenic. This gotta be my favorite. Look at those rocks!