After getting back from my Memorial Day trip to the Kaibab, Scott, Lee and I headed to Mt Graham to do the first epic of the summer. Scott put up his version of Around the Mountain here.

We woke up at 5:15am to Lee making the bacon. I told him if he woke up early to start cooking for me. Mmmmmmmmmmmmm....despite the smell, I just sat in my sleeping bag listening to the many birds singing. It was not until Lee came over with chocolate covered espresso beans that I really perked up. I woke up and finished the taters and eggs (in bacon fat) for our endurance-style breakfast.

The estimated time for the Around the Mountain ride was about 8-10 hours. 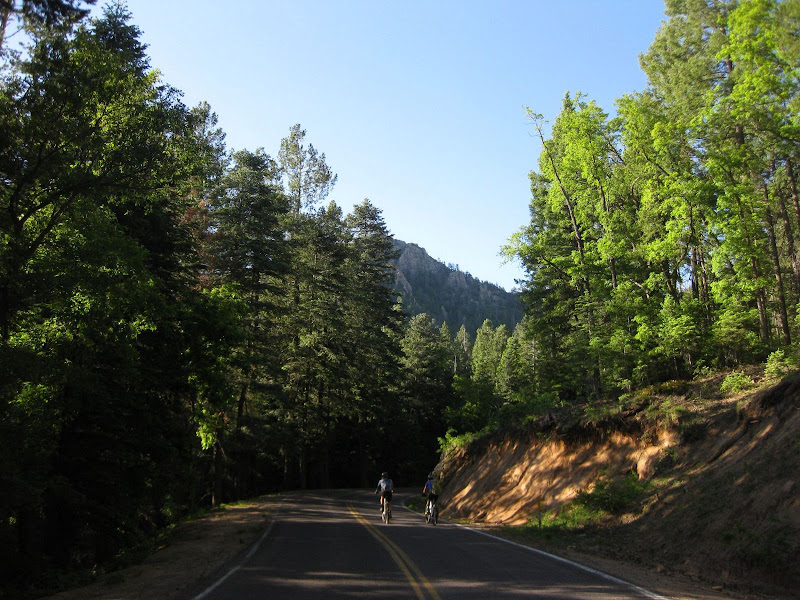 We rolled up the highway toward Swift Trail 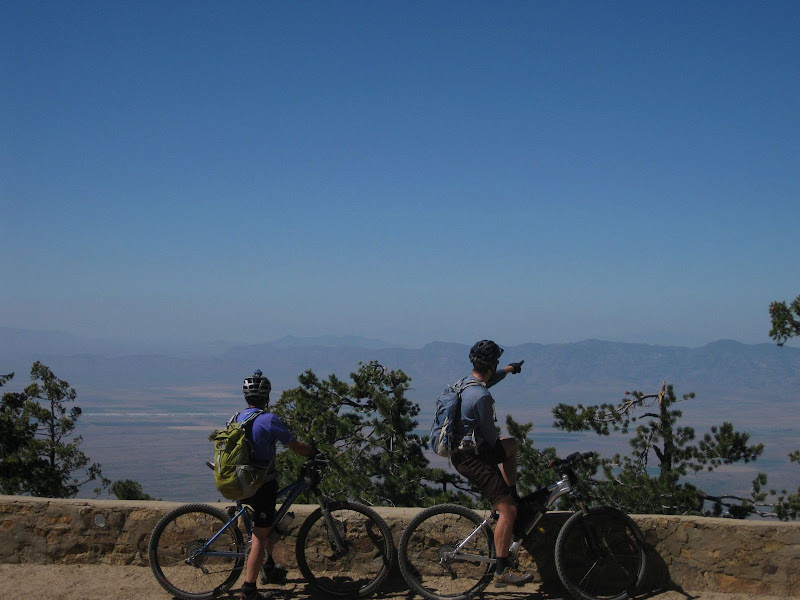 stopping to enjoy the views. Scott is such a sucker for pointing. I am going to make a picture book with all his pointing pictures The Book of Scott Pointing the Route. 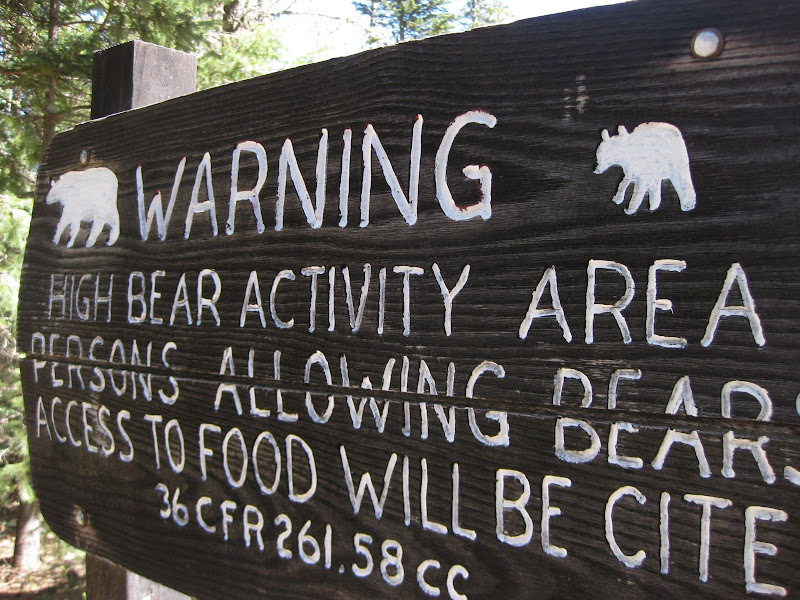 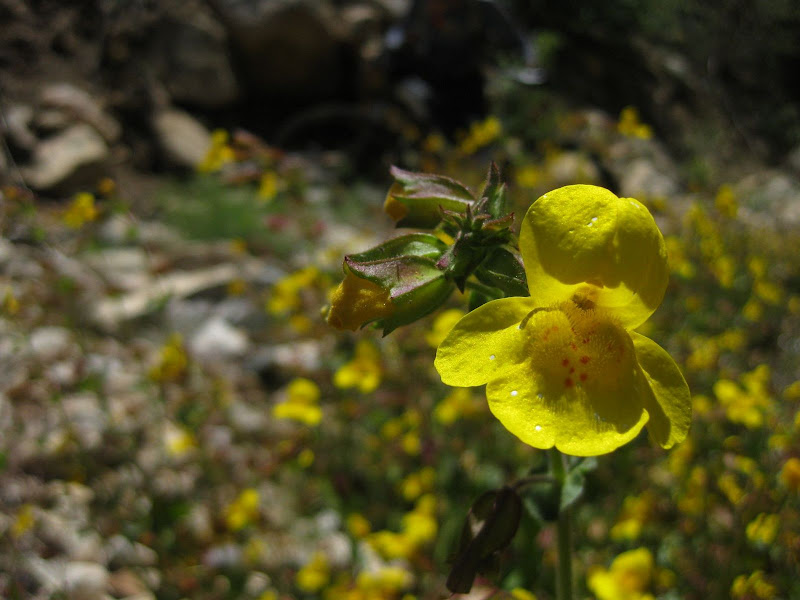 Despite the fire, life seems to be returning to the mountain. But the trail still was difficult at times due to the large number of downed trees, probably in the neighborhood of 250 trees on the trail. 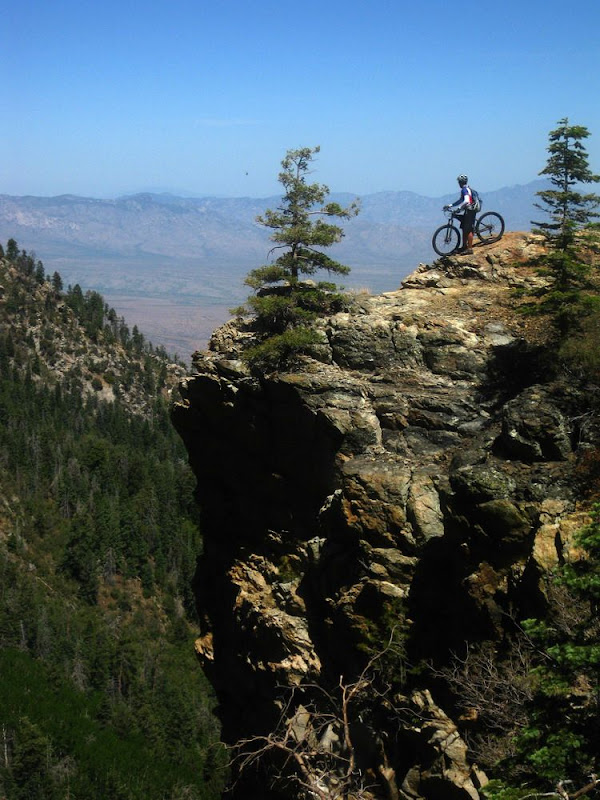 Photo by Scott Morris
The downed trees only allowed us to take more pictures, for a time. I was quickly intent on destroying ever tree.....or at the minimum, moving it off the trail. A 100 yard ride was very uncommon. Most of the time we dodged some trees and then walked to the next section of downed trees.

Would there be any hope to Around the Mountain? 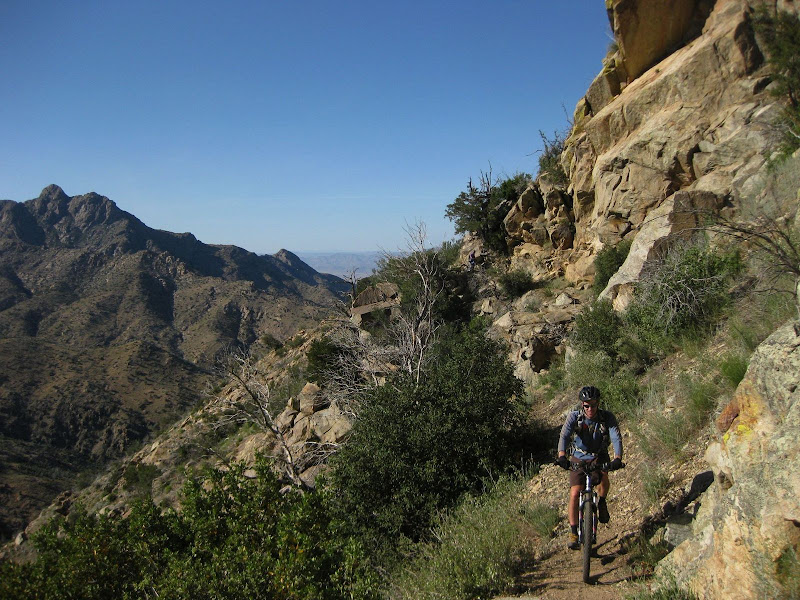 Some beta gave us hope, so we continued on. Eventually, the trail became nearly clear of downed trees. 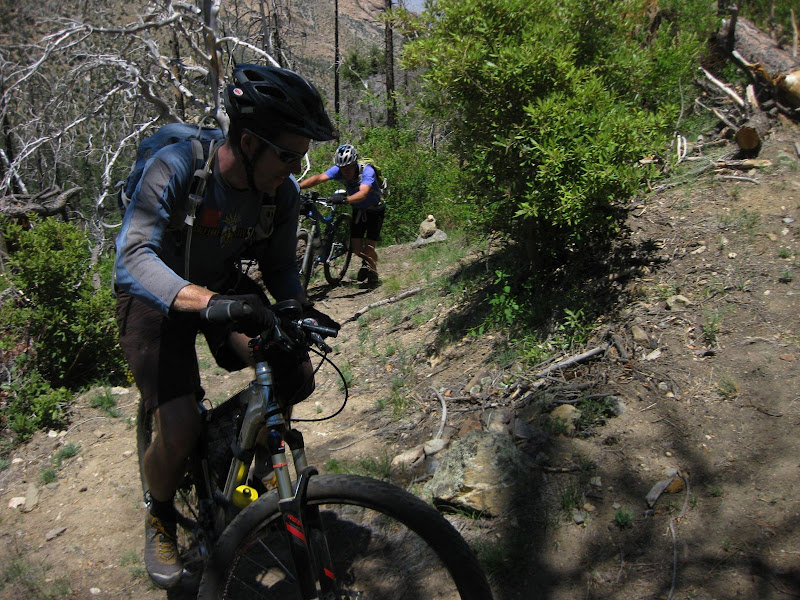 Despite a sprained ankle, Scott was hitting nearly all of the switchbacks with his 20x36 gearing. I was floundering behind him hoping to keep up. If you look closely at this picture, you'll see an intent concentration. Therein lies the key to nailing a swtichback; and of course the correct gearing.

Methinks it is time to put those 20t and 36t rings on my bike instead of leaving them on my dresser. 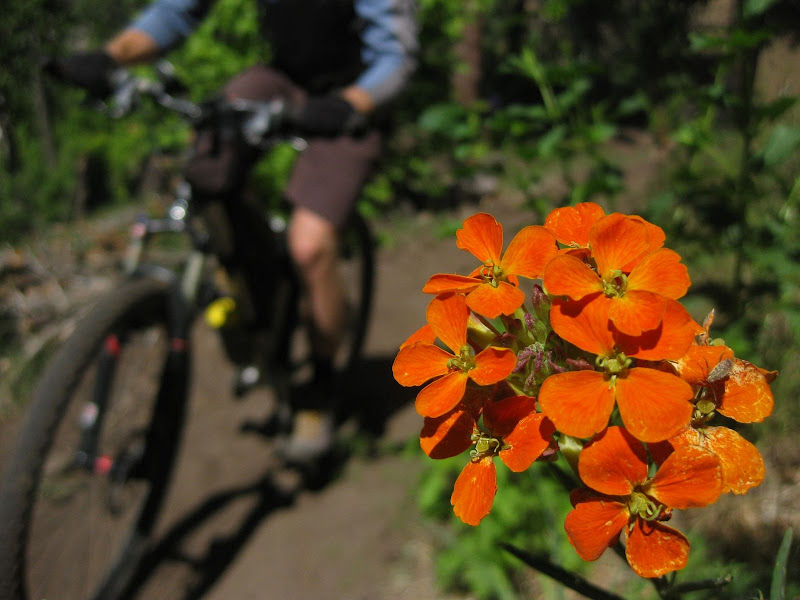 The sounds of breaking branches was replaced with grunts as we began to try to ride this super, steep terrain, doubt turned into excitement, and the look of puzzlement.... 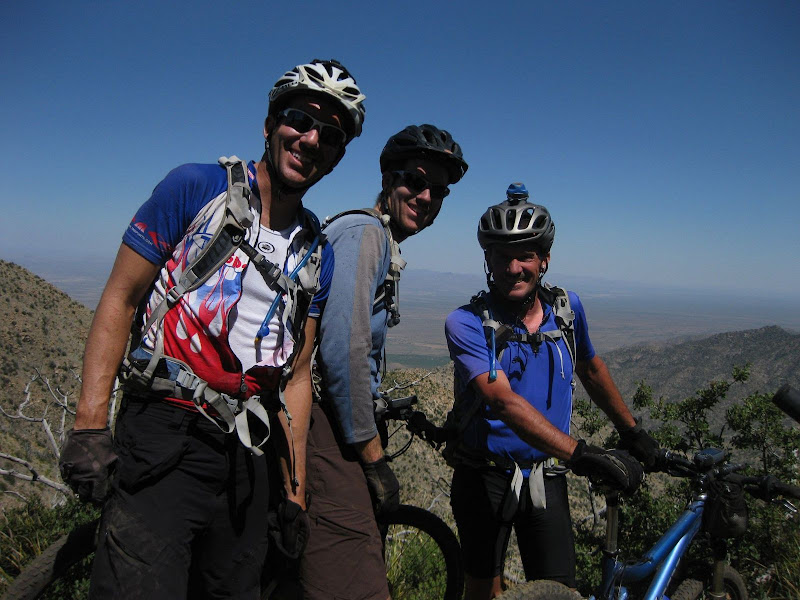 The crew....me, Scott and Lee (left to right). This may be our first group shot that we have ever taken. Show me your mountain biking friends and I will show you what kind of rider you are...I am blessed to have some pretty nutty mtb friends. 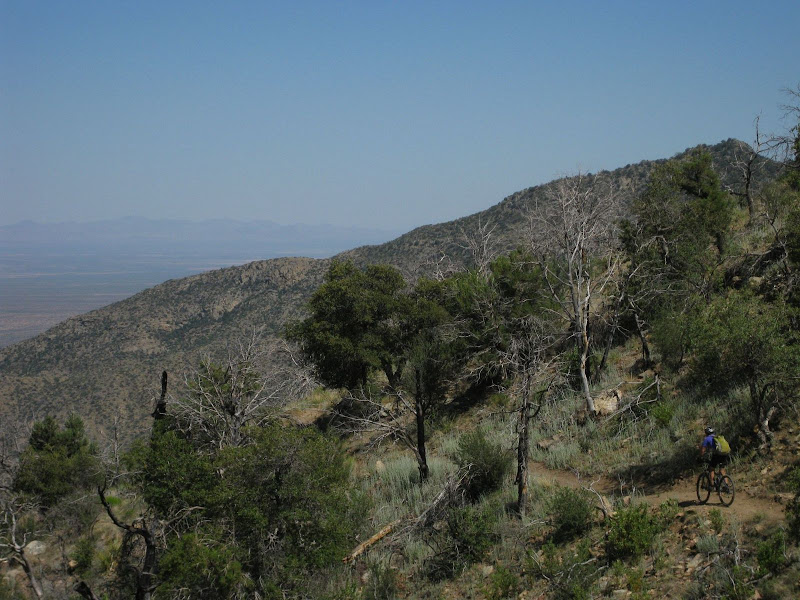 The ride from here on could be summed up like this: descend 2,000 feet on trail (amazingly well built given the terrain), cross a large creek, then begin to ride up the 800 feet of trail....repeat three times. 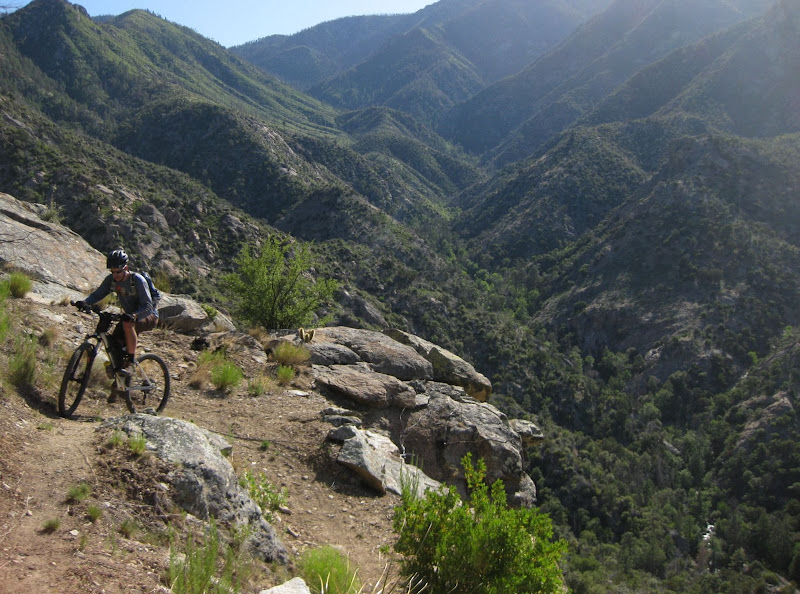 I have decided that Scott really is the master of switchbacks. There are times, on occasion, that he fails and I prevail. But these are moments are short lived. If you cannot ride, the best thing to do is push and we did that a lot on this 14.5 miles. 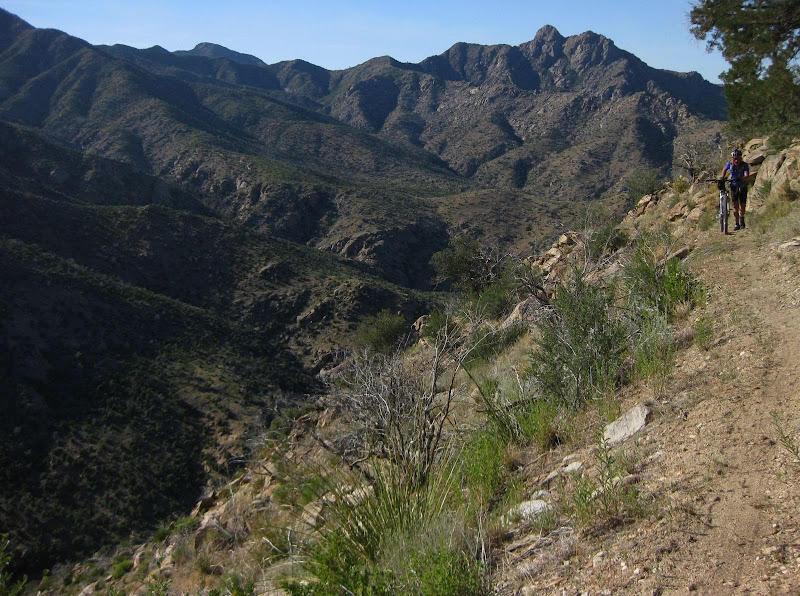 Lee probably had the best idea; he simply walked the majority of those steep, technical sections. Lee also blasted by Scott and I as we headed back to camp on the road.

12 hours later, we completed the loop. Mile f0r mile, that 14.5 miles on Around the Mountain Trail was possibly the hardest of my life; harder than climbing singletrack to Lemmon. I look forward to spending another weekend on Mt Graham soon.

I look forward to the Scott Sucker Pointing photo book. Great shots, and one heck of a ride. I think my legs are still feeling all that steep climbing.

We need to return to Graham for sure.

Scott is the master of technical climbing, no doubt!

LW and I did a 29 mile ride yesterday that took us 8 hours, you sure got us beat tho. Some "rides" are more easily hiked, sounds like yours counts as one of those.