After a weekend doing the Gila River Ramble a few weeks ago, I was left with that yearning for more, yet *different.* It is the kind of thing that would lead you to search for a new route, like Scott and I did during the Coconino a few years ago and with other first time bikepacking trips.

As soon as the Gila River Ramble was over, I talked to Lee about going to Mexico to do a bikepacking trip. No stranger to riding in Mexico, he was excited and asked the plan. Max and I recenly had a successful bikepacking trip last year in Pinacate, Sonora. I had been scanning over Google images of places in the Sierra Madre in Sonora, Mexico....El Tigre and Lake Angostura seemed like a possible destination.

From various fisher forums (I enjoy reading Fish Forums in my spare time), it seemed like the lake was famous for bass fishing. I emailed one of the active members on the forum and got a GPX file that really did little to help. The only other option was to draw in a GPX file using Google Earth. It would be a "rough guide" of where we wanted to go. Additionally, I spent about 3-4 hours looking on the web about the area.

The plan was to go around the lake on a "possible" road and then over to climb a Sky Island, called "El Tigre."

After about an hour of visa/car permit, we headed down to Agua Prieta for the night.

The next morning we drove to Esqueda, Sonora and talked to the Policia Municipal about the area. One of the policewomen offered to leave our car at the station while we were bikepacking. We got ready (while talking to one of the prisoners behind bars, offering him some candy at times) and left after eating some carne asada tacos. 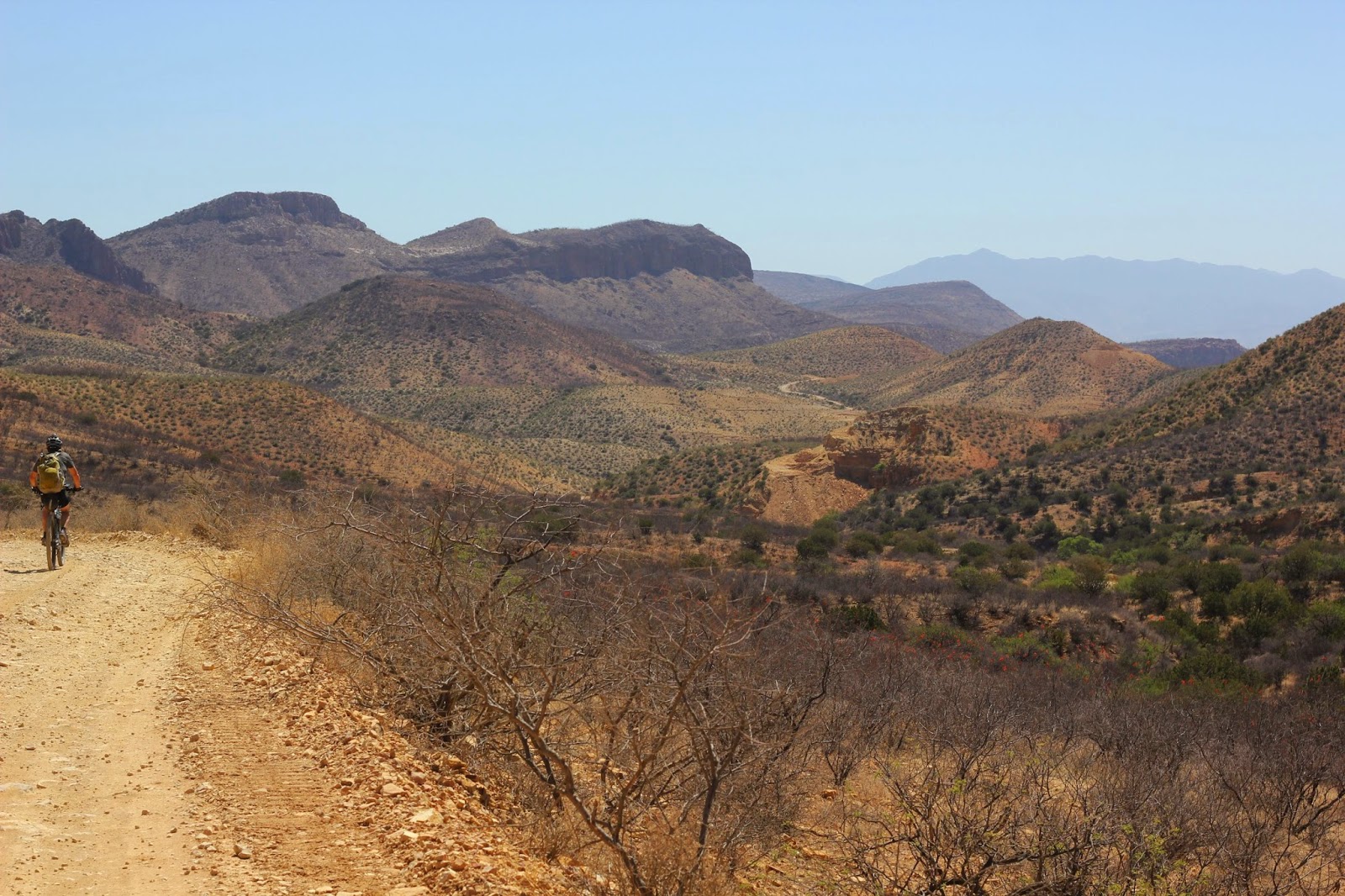 We started riding and were immediately greeted with some stunning views of "El Tigre" in the background. There is something to be said about exploring a new area, especially when you can see your goal far off in the distance, like a carrot beckoning you.﻿ 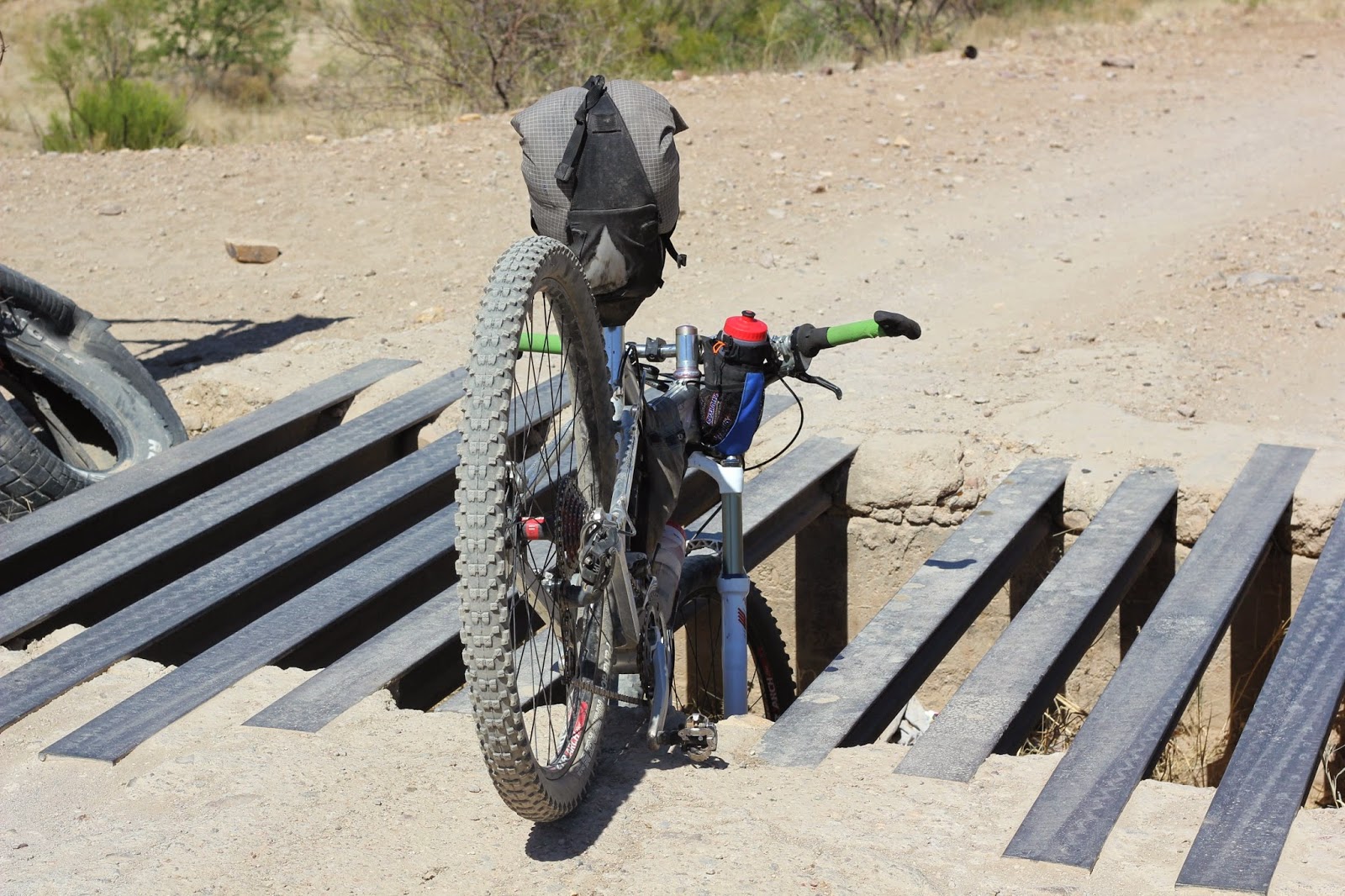 Although this is not a ride without obstacles. First, you have to be careful of cattleguards that are not bicycle friendly. 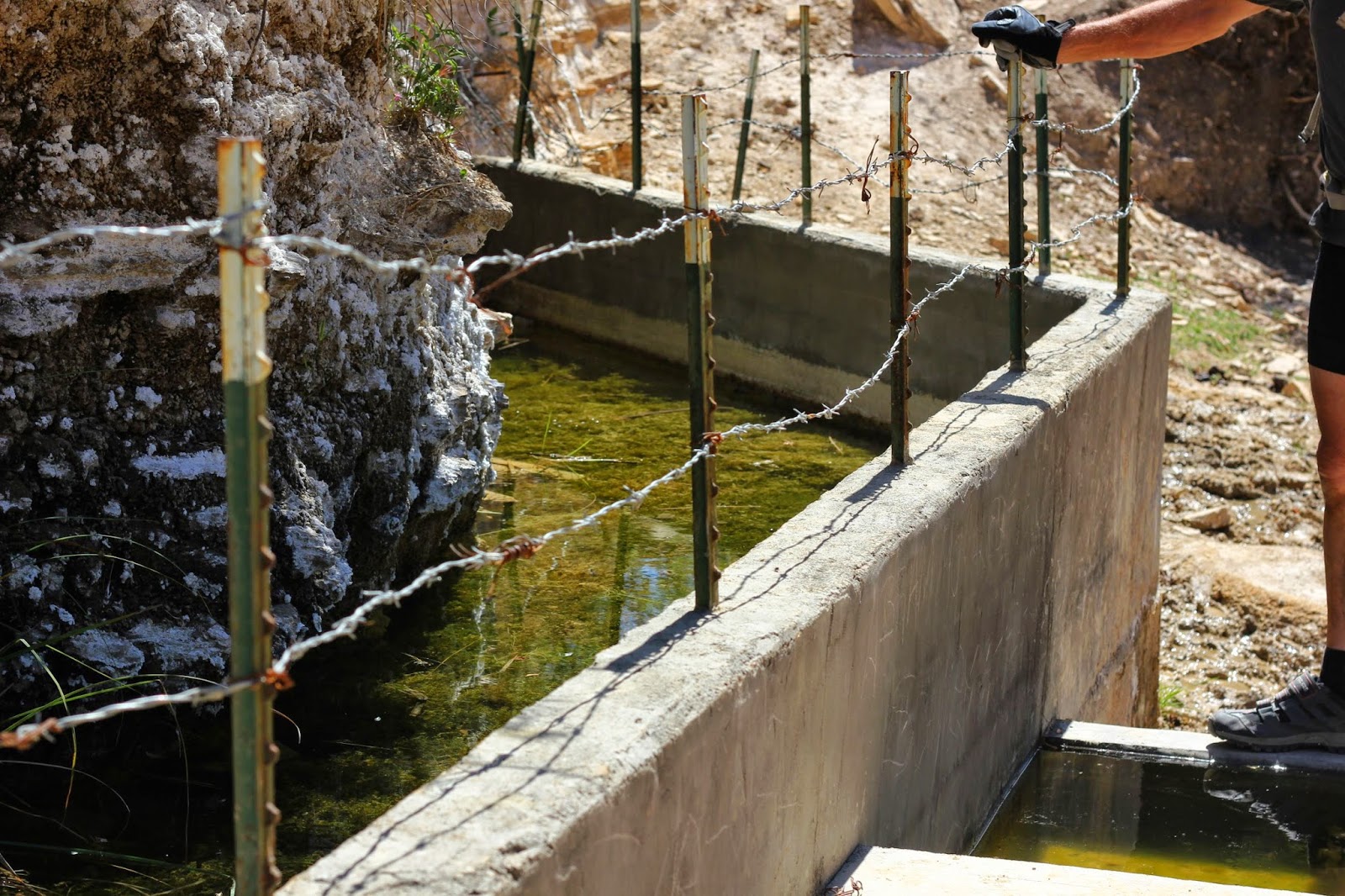 More importanly, there was the water issue. Afterall, we were riding in a desert for the first day. 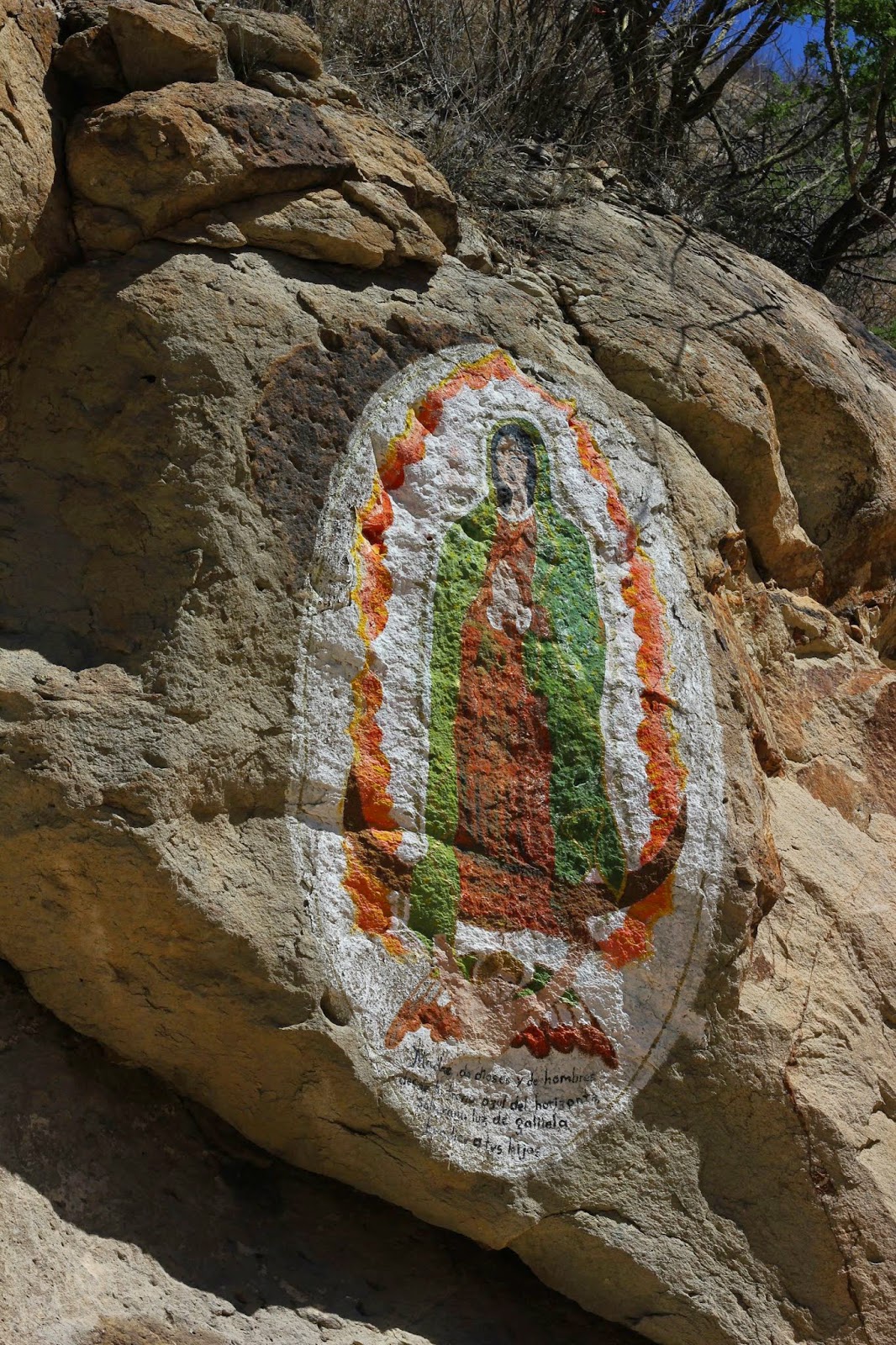 Luckily, we had some extra help from a power that is not from this earth. 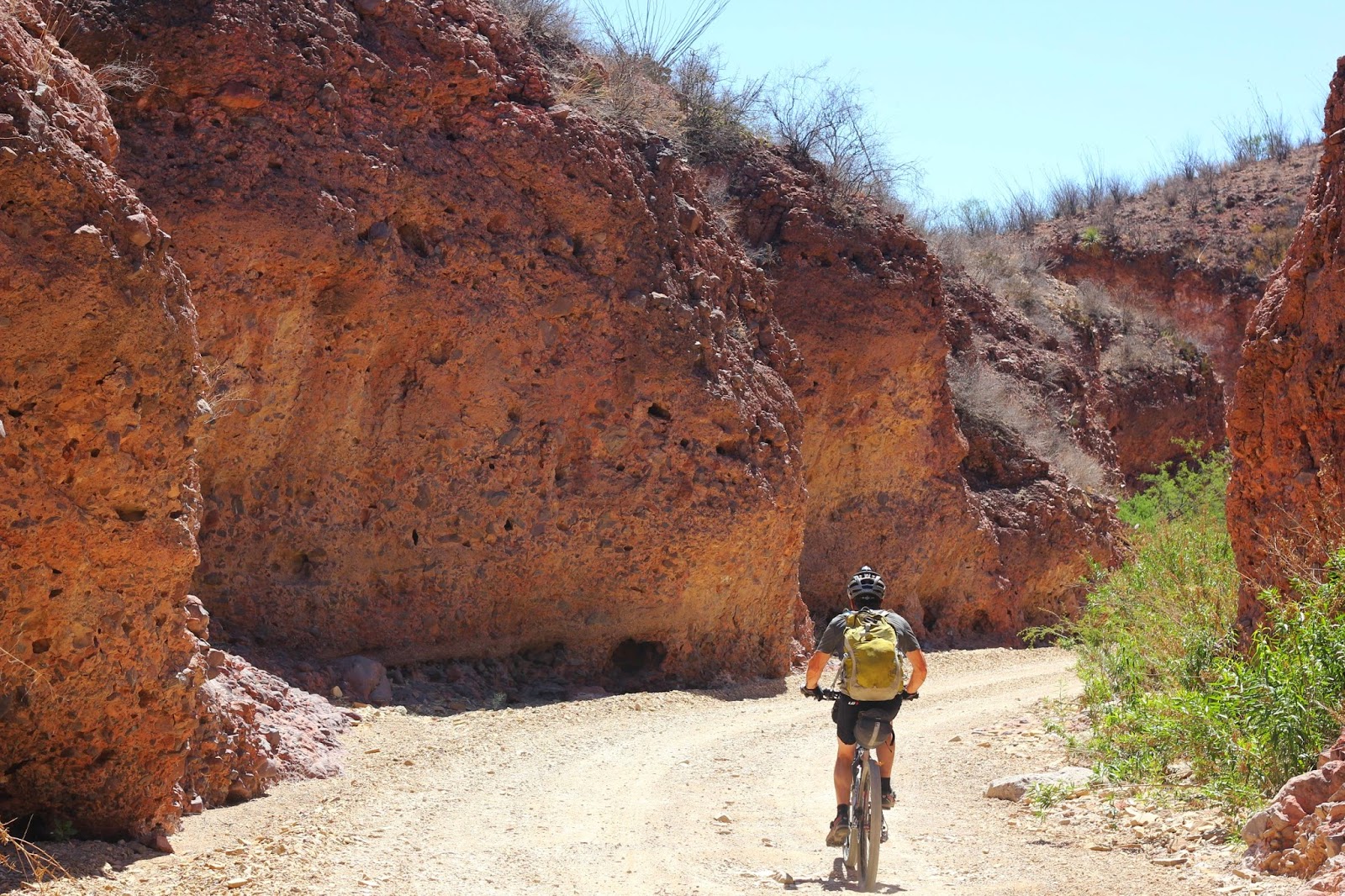 After the big, first major climb (shown in the first picture), the road began to weave through canyons.... 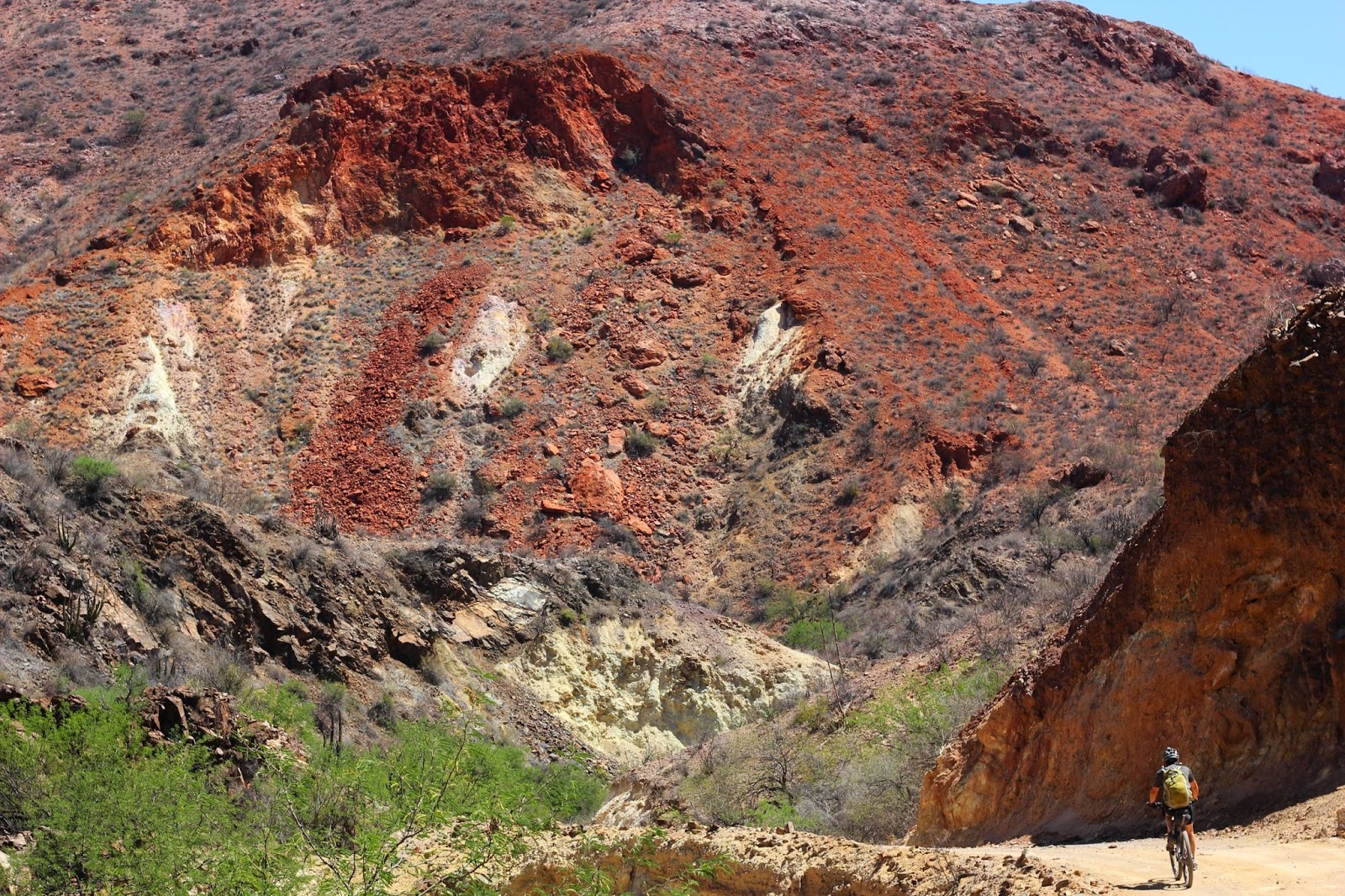 ...up and down at times, for several miles. We had our first encounter with a rancher right before his ranch, Agua Caliente. Oscar offered Lee "anything that we needed" saying that we just needed to head to the ranch. I was asking another person in the car, presumably his son, about the route around the lake. His response was a "ufta," which in English translates to "very long, steep climb." 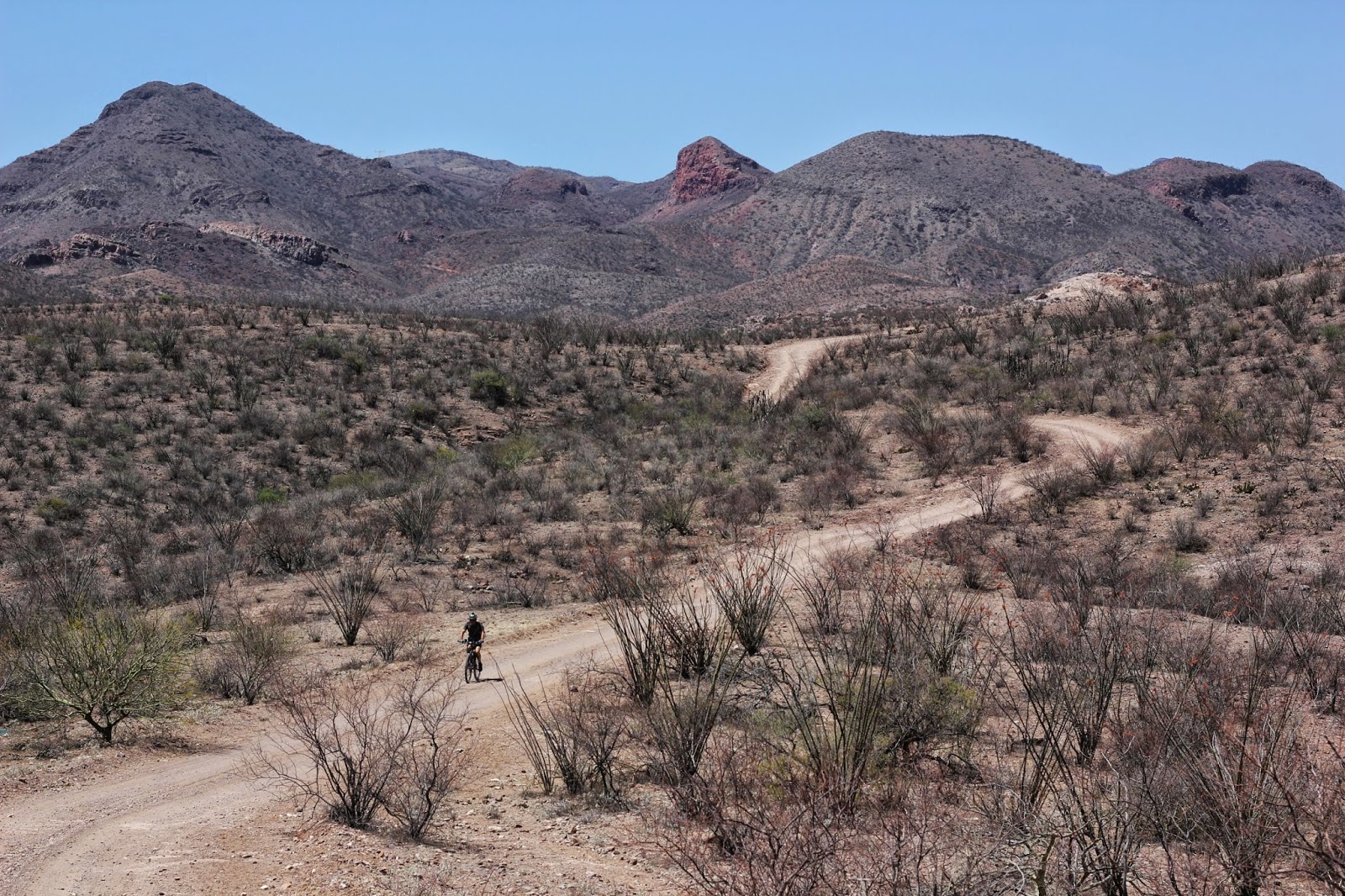 Long and steep, eh? I laughed at the "ufta" comment in my head for a few hours after we left Oscar. 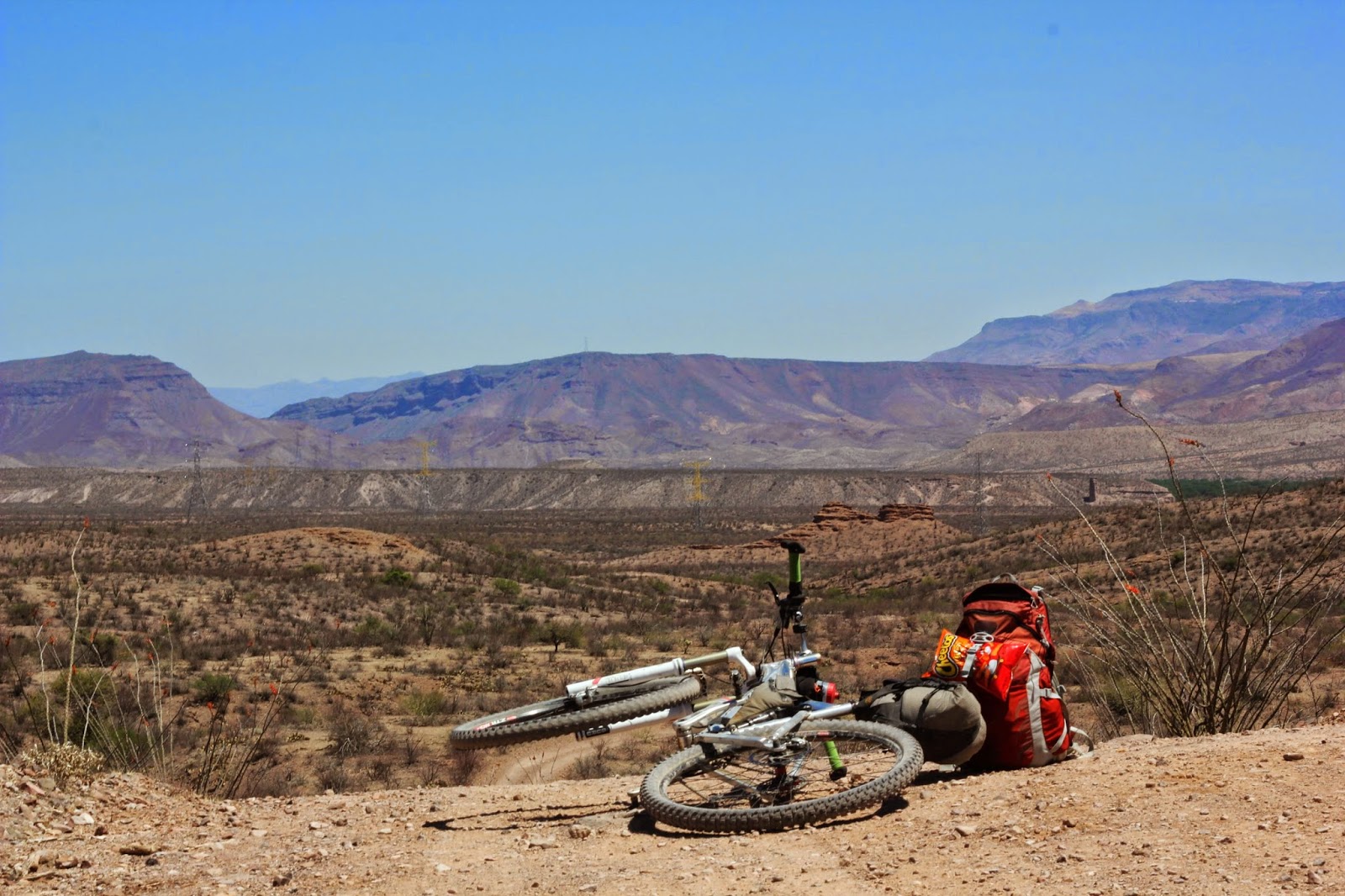 Did you know that Cheetos has 1100 calories in one bag?! 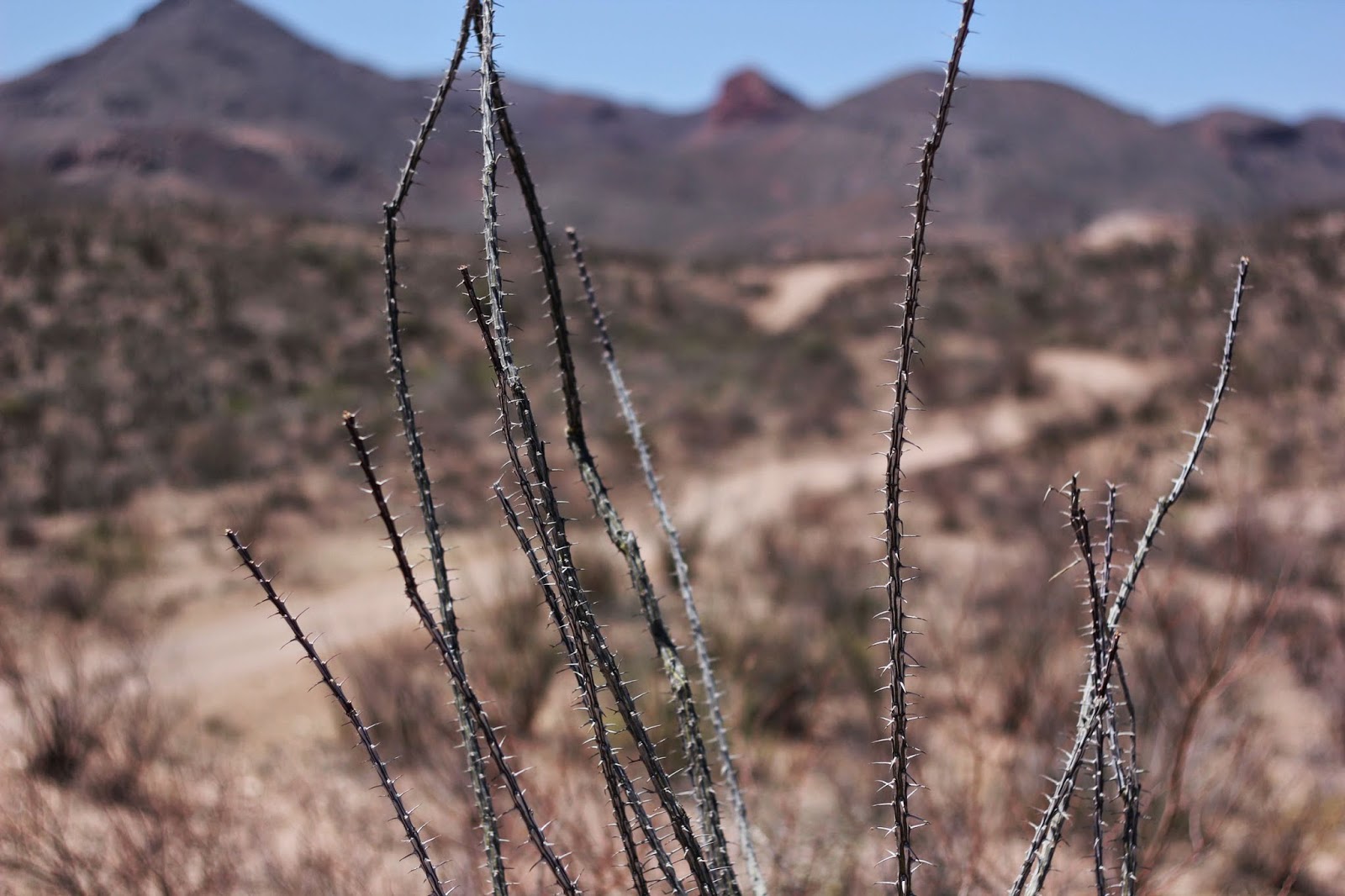 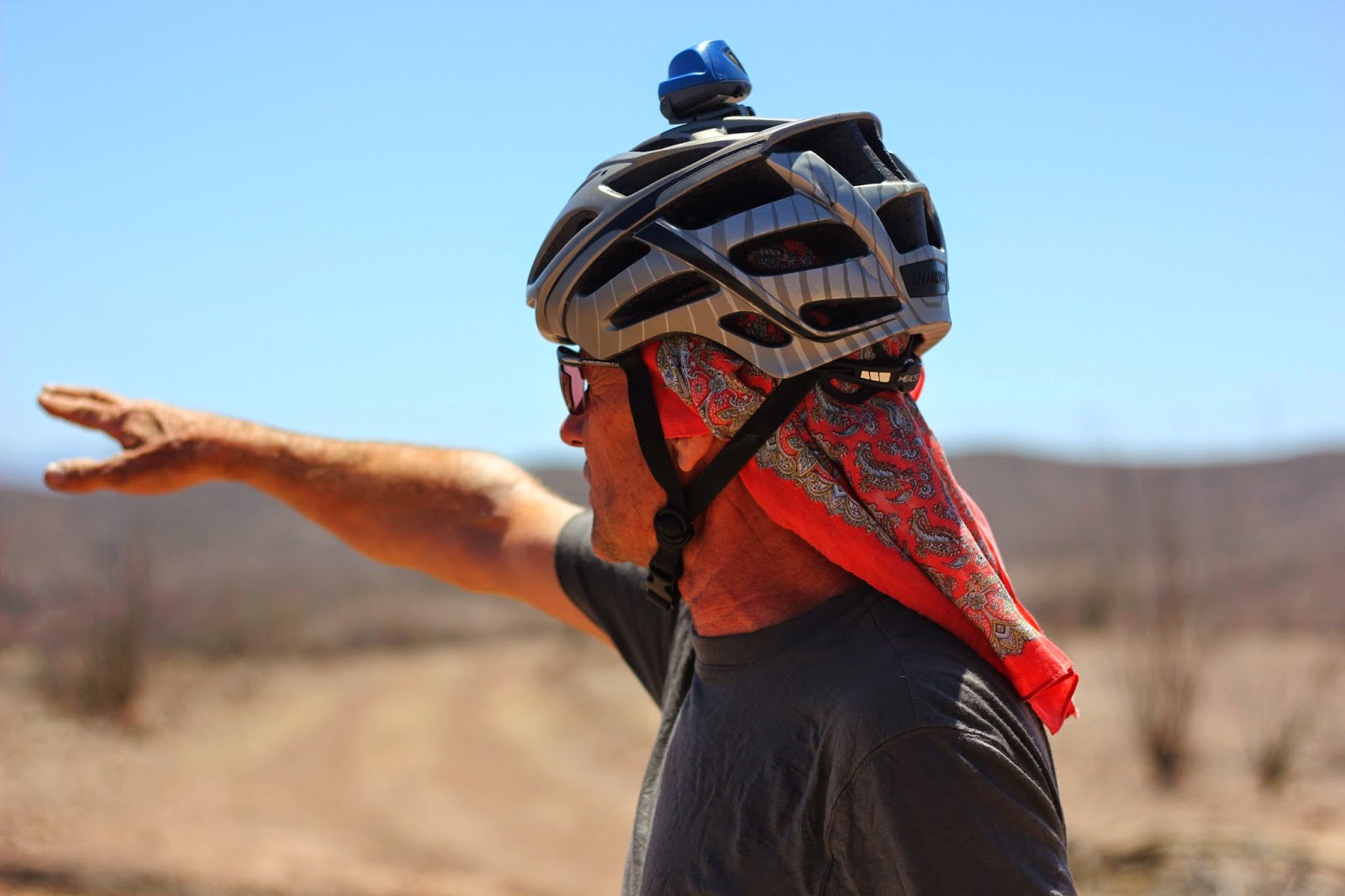 A sign of a legit, exploring bikepacking adventure? Yes, it means a lot of pointing at the horizon.﻿

After about 4 hours and only 2 cars passing us, we stopped to evaluate the plan of getting around the lake. To the north, the lake is met by its main tributary and source. Finding a crossable place where the river meets the lake might save us miles. 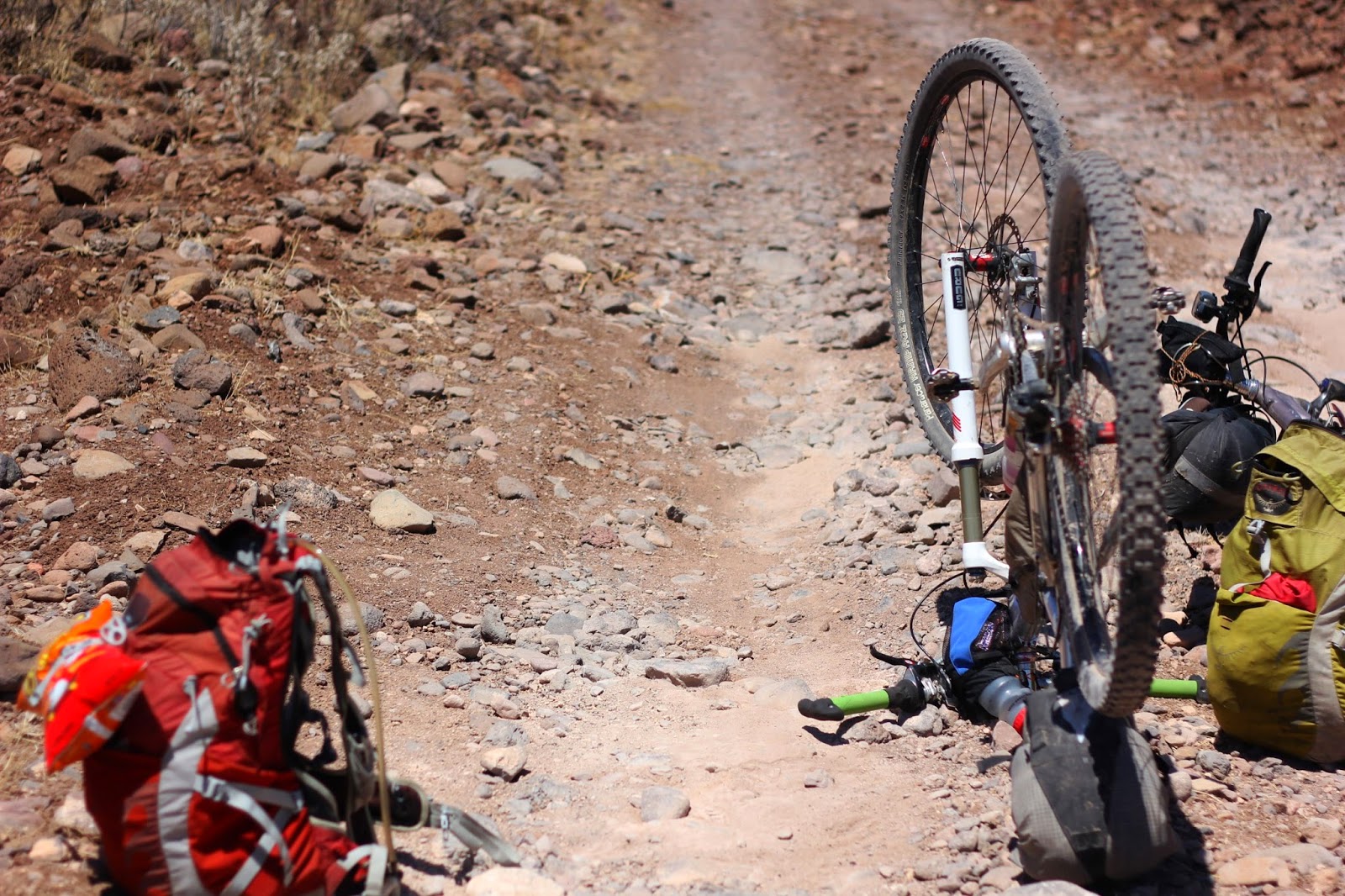 But, I had a little mechanical first. My brake pad spring had gotten pushed in betweens the pads and bent. So much so, that is was deemed useless. We took it completely out and hoped for the best during the next few long descents to the river. 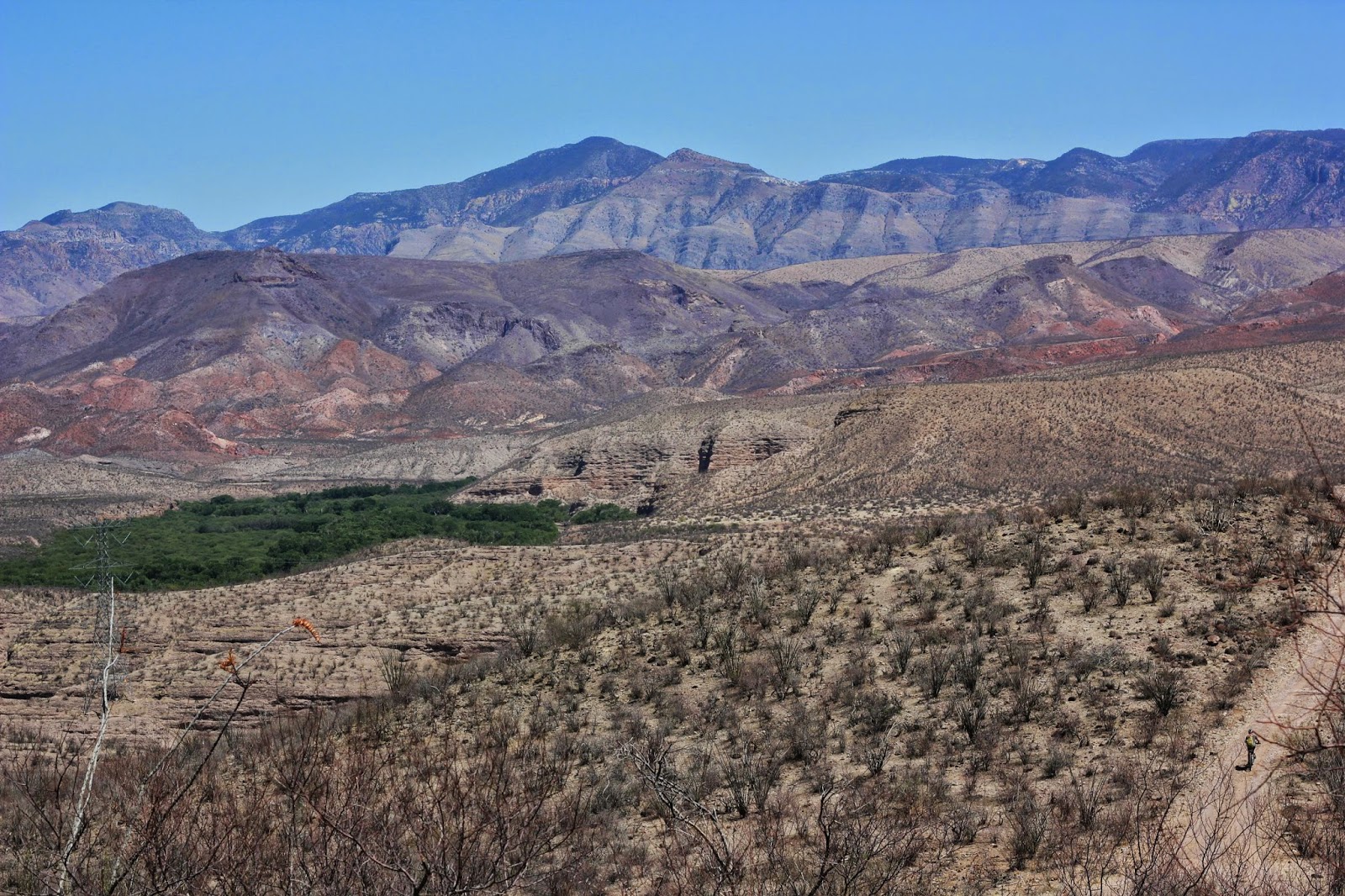 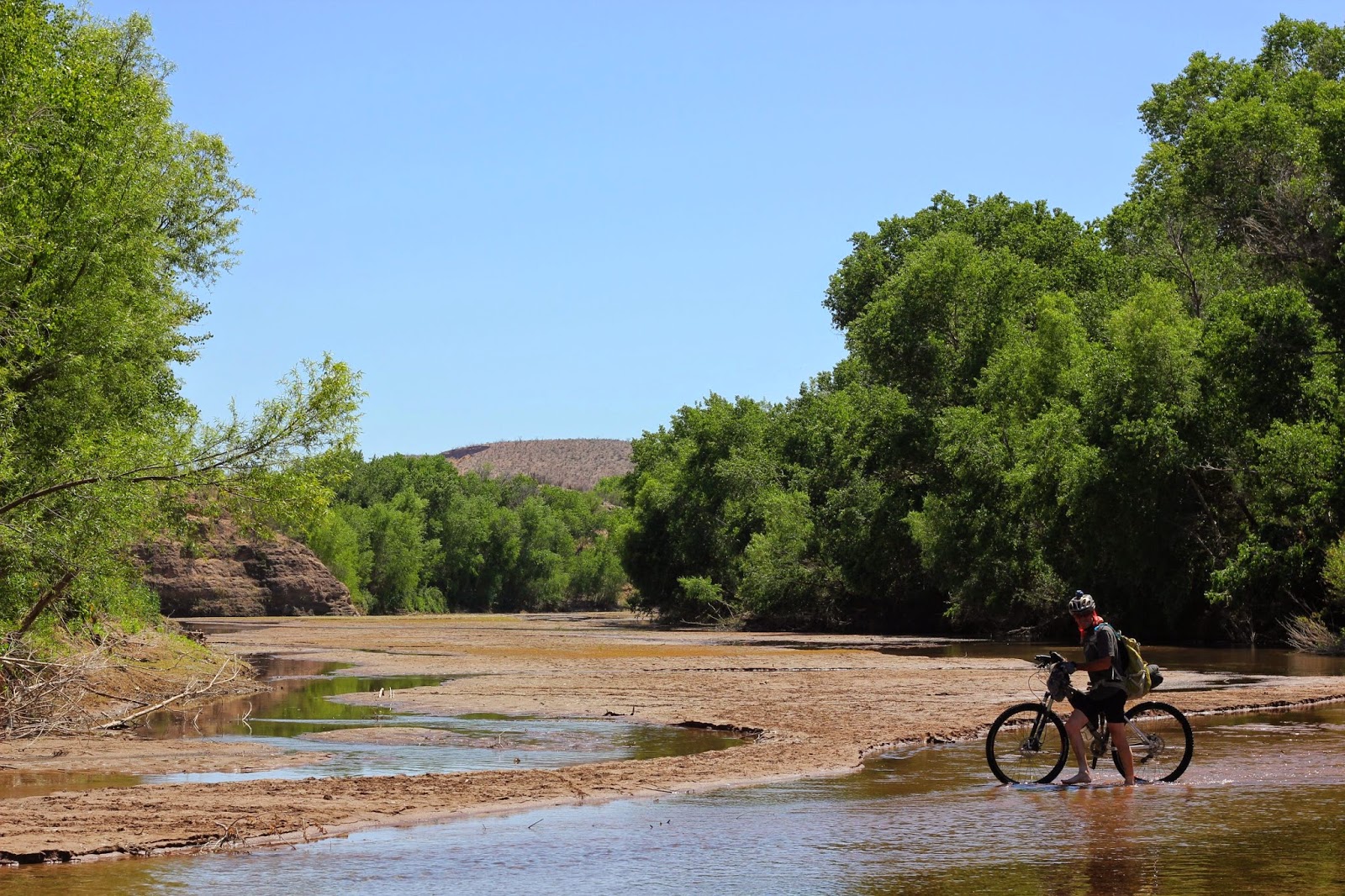 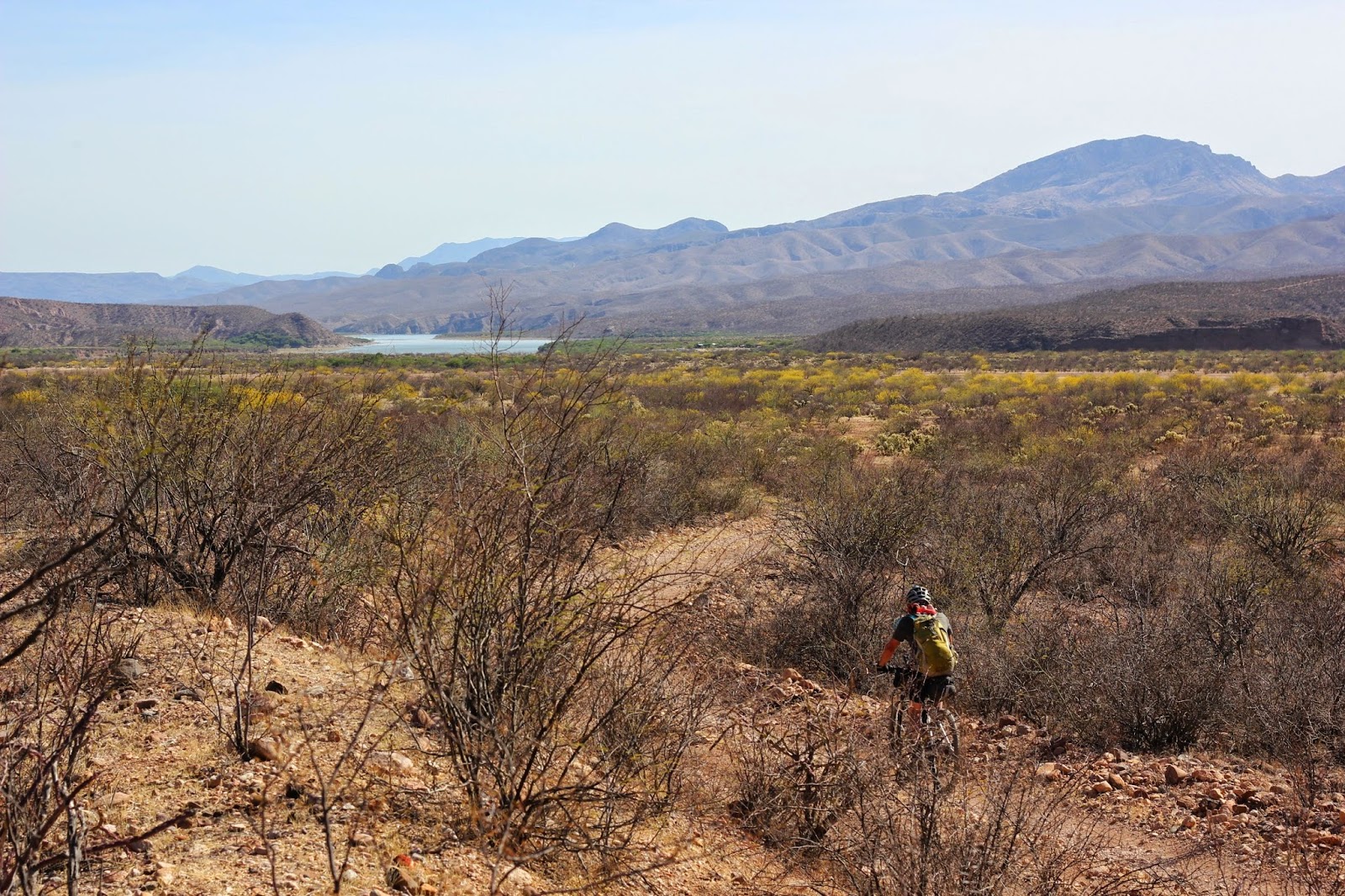 After our break, we continued on the east side of the lake on a less-traveled road, but that had equal climbing. 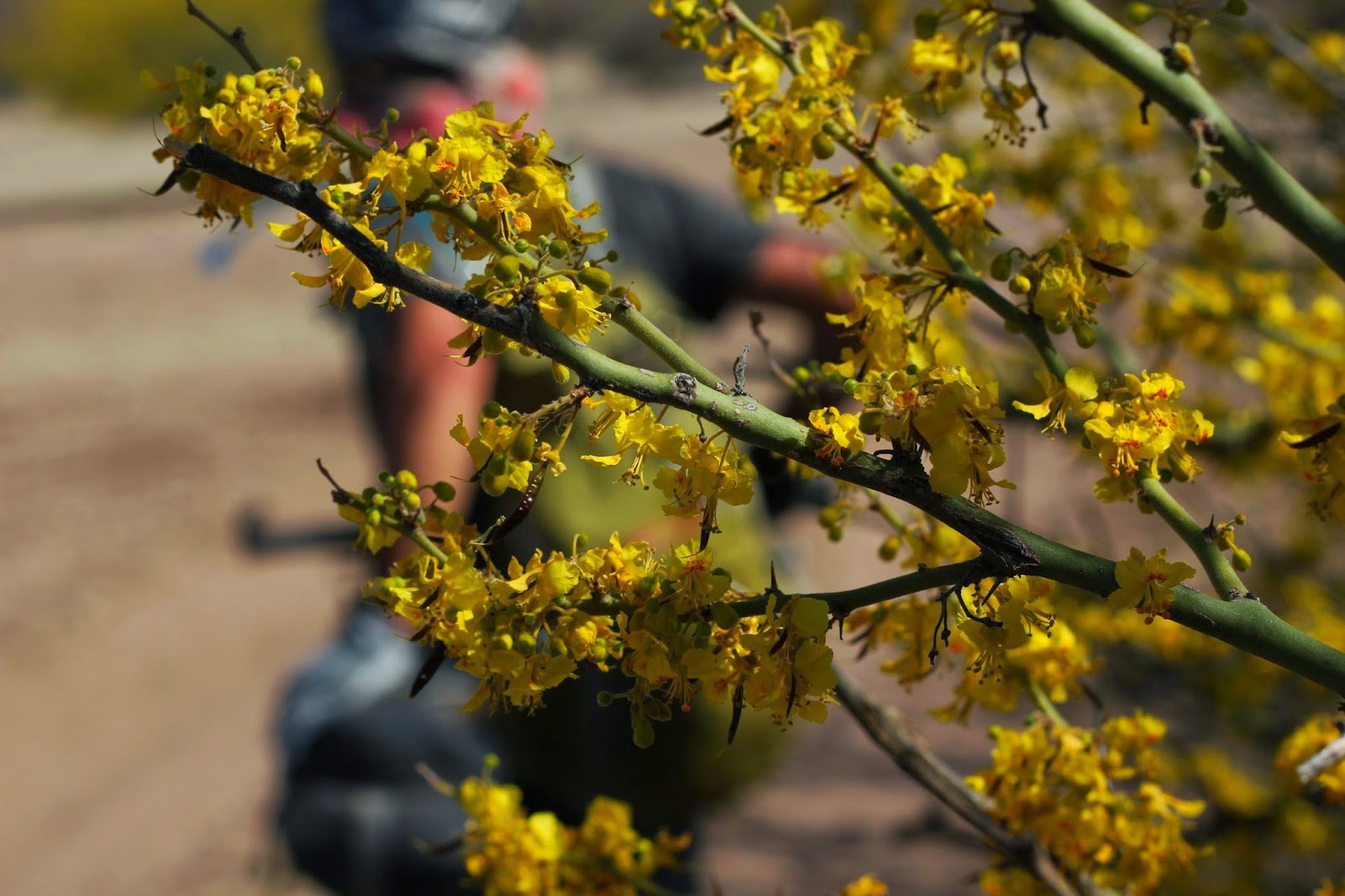 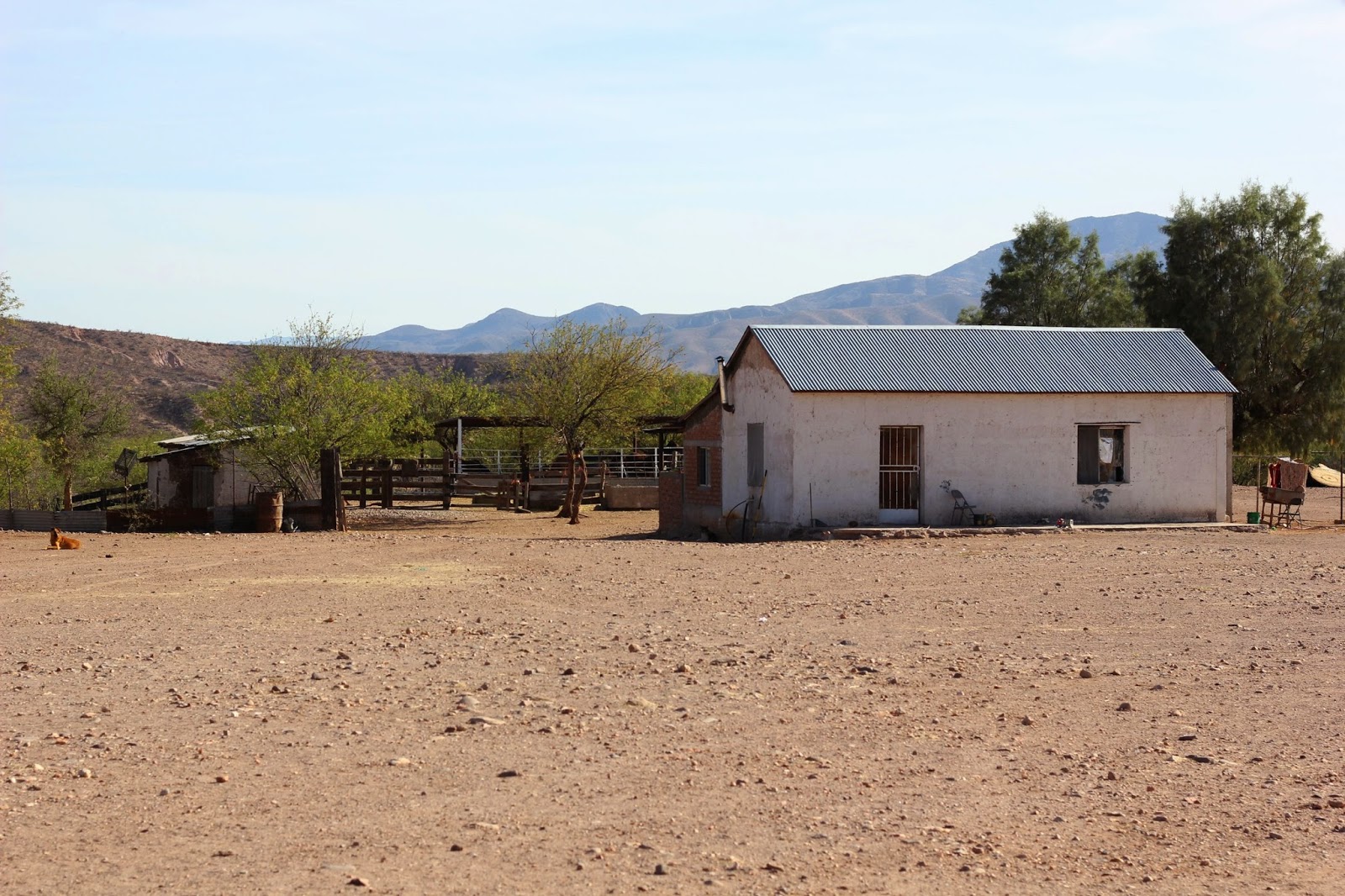 We continued pedaling until we met the next rancher, Gilbert. His house (show above) was close by and he told us to head over and fill up on water. Incredible, simply incredible.

Lee said it best, "this is what is was like back in the early 1900s when people would see you and offer you anything and everything."

Every rancher during the entire trip did the same thing..."what can I give you? do you need anything?" 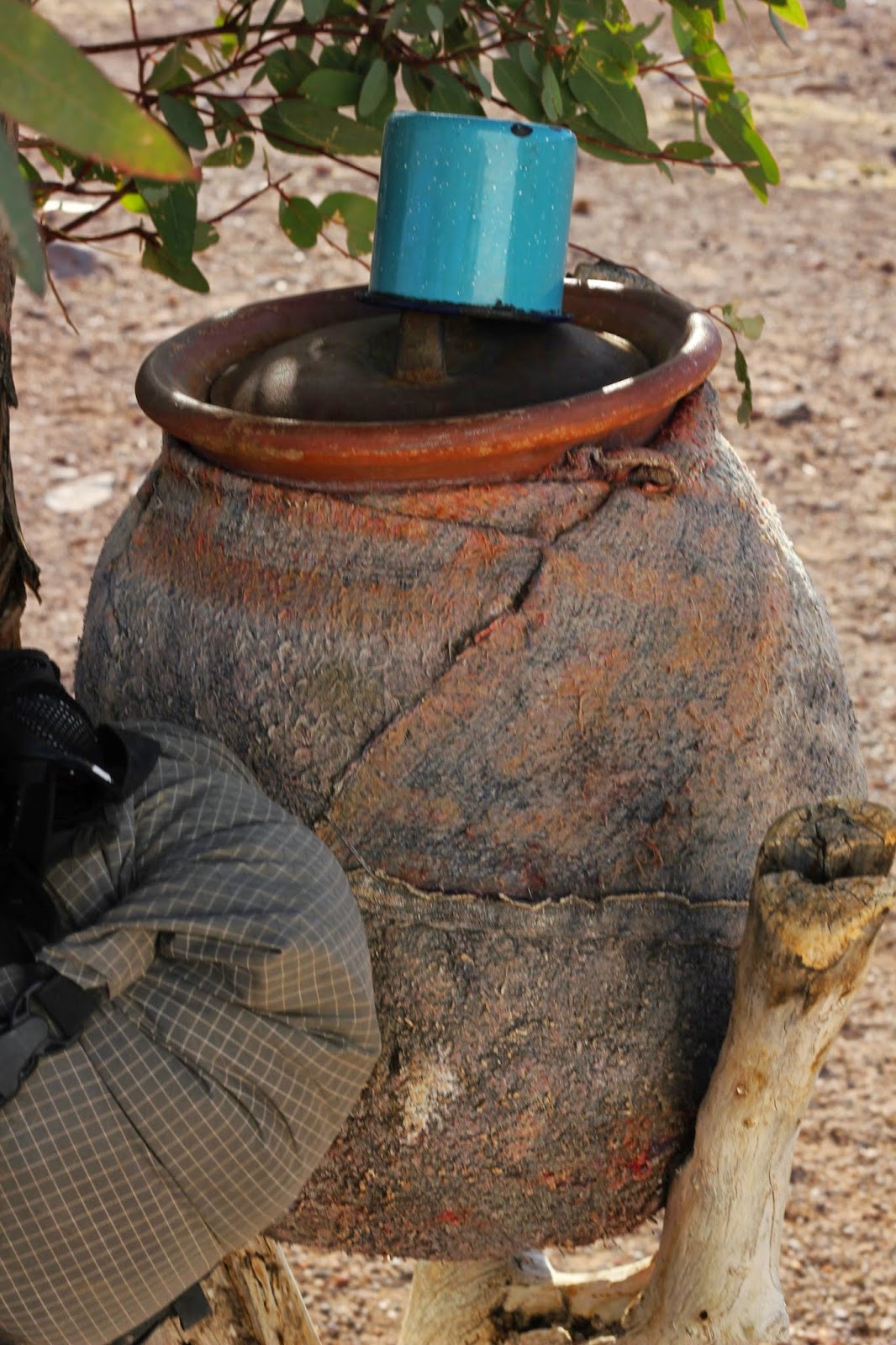 A pot in a pot refrigerator for the drinking water

I loaded up 200 ounces of water and started the climb up to El Tigre. When pressed, Gilbert estimated that the next ranch on the way to El Tigre was 13 kilometres. Named Gigi, Gilbert, made it seem like we could camp there if needed. 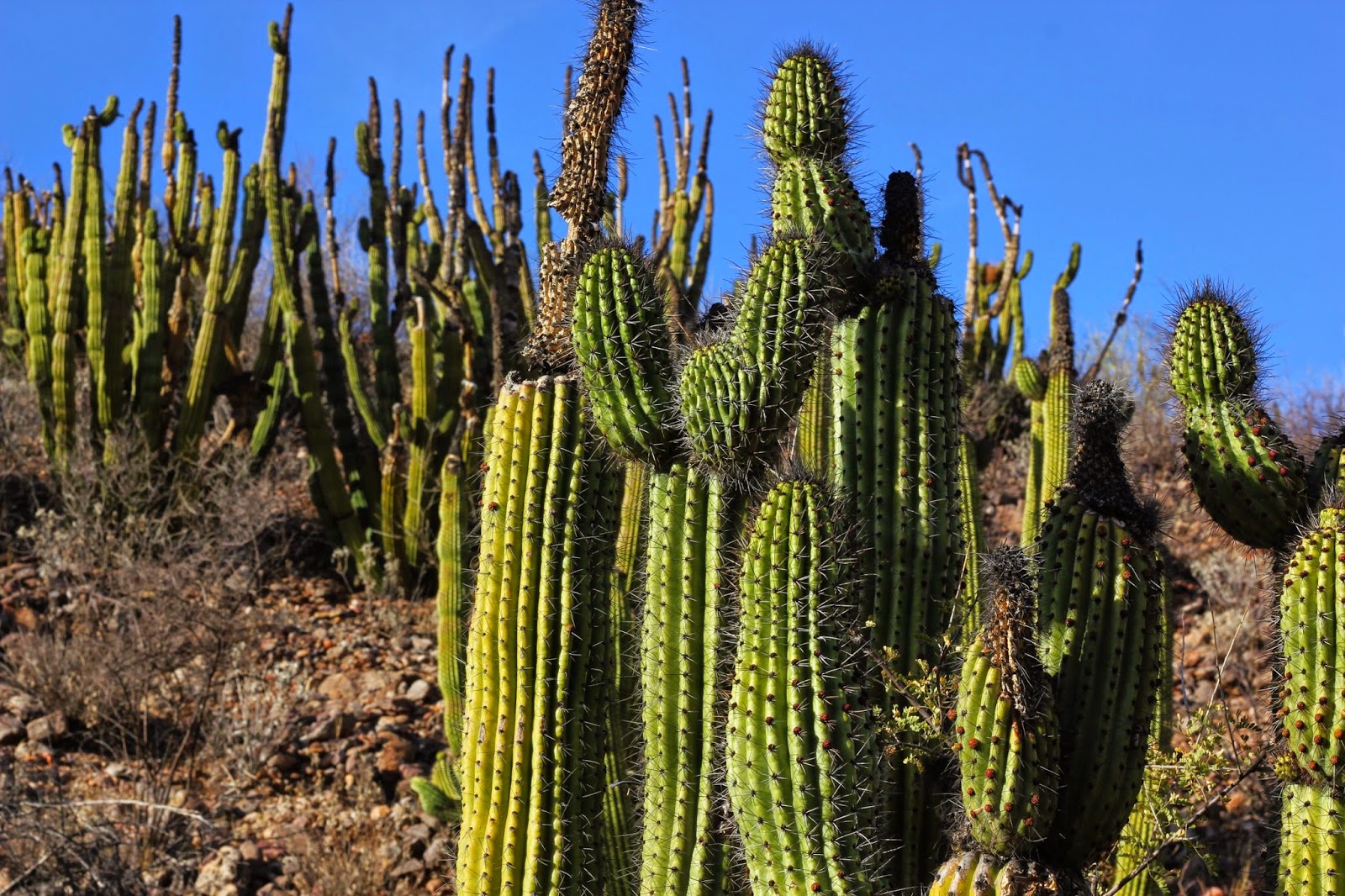 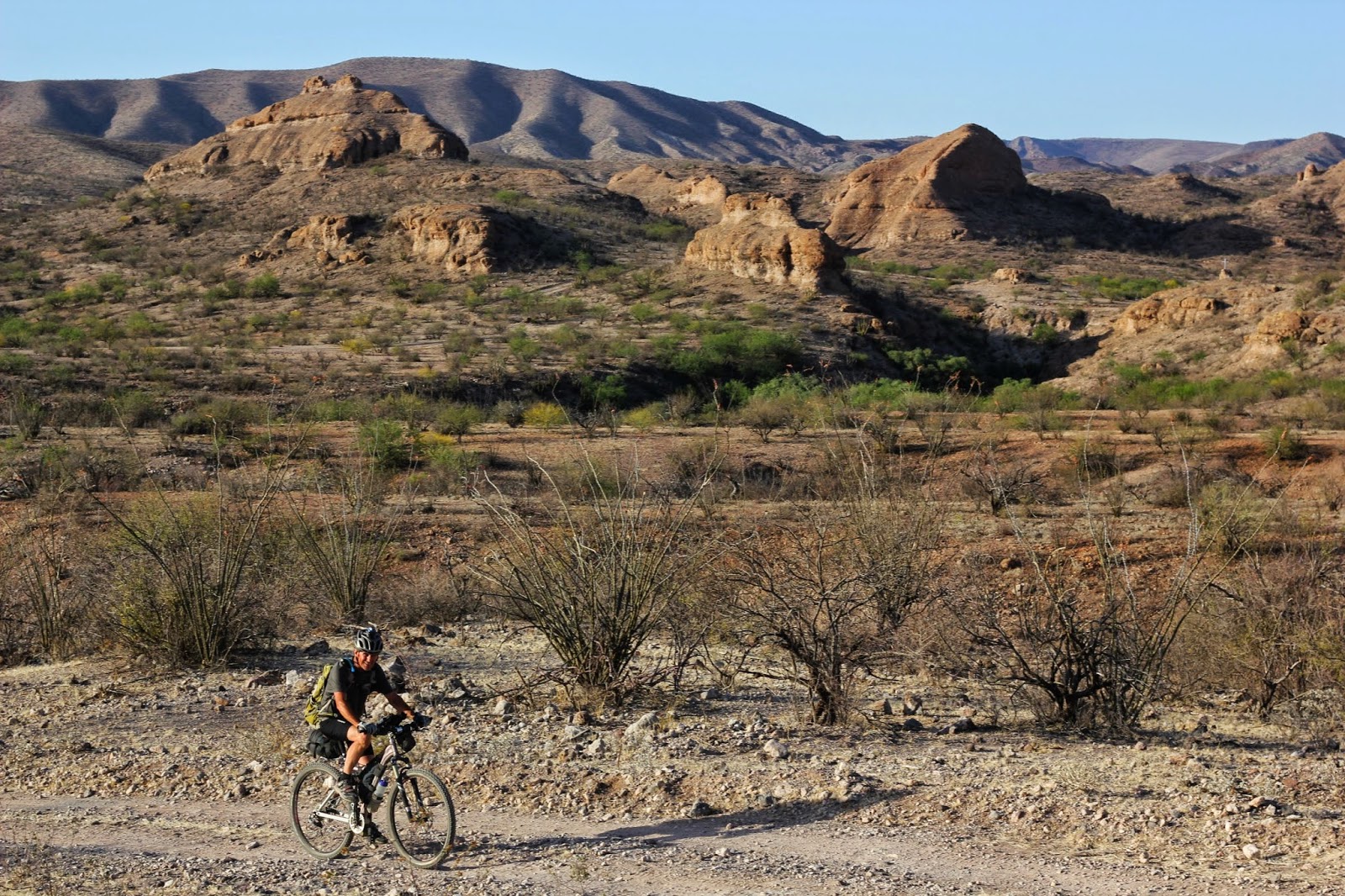 After about 3 miles of wash riding, we began to climb up toward El Tigre. 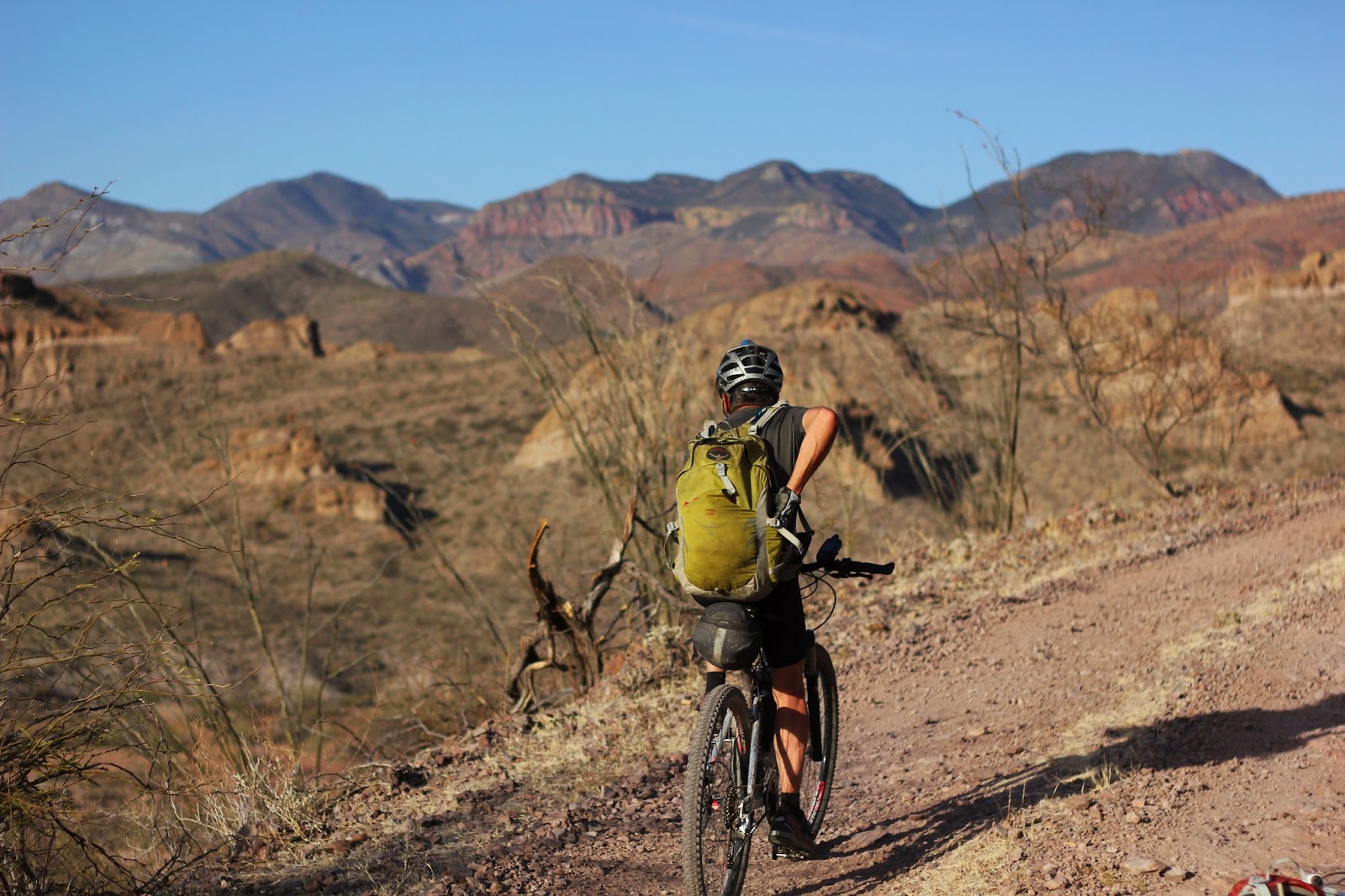 El Tigre , a Sky Island, can be seen in the background 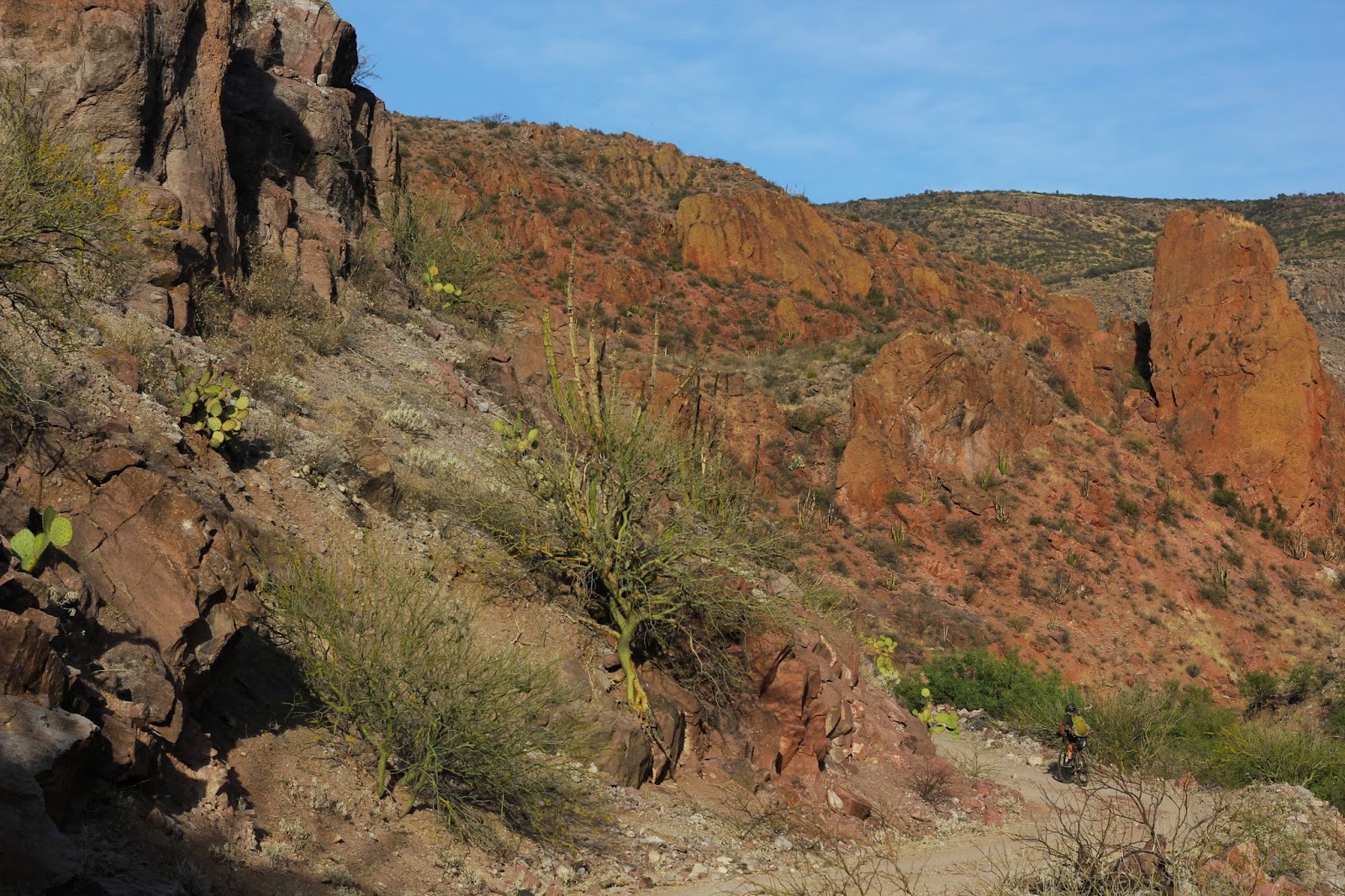 A little too early for camping, but we almost chose a spot near here 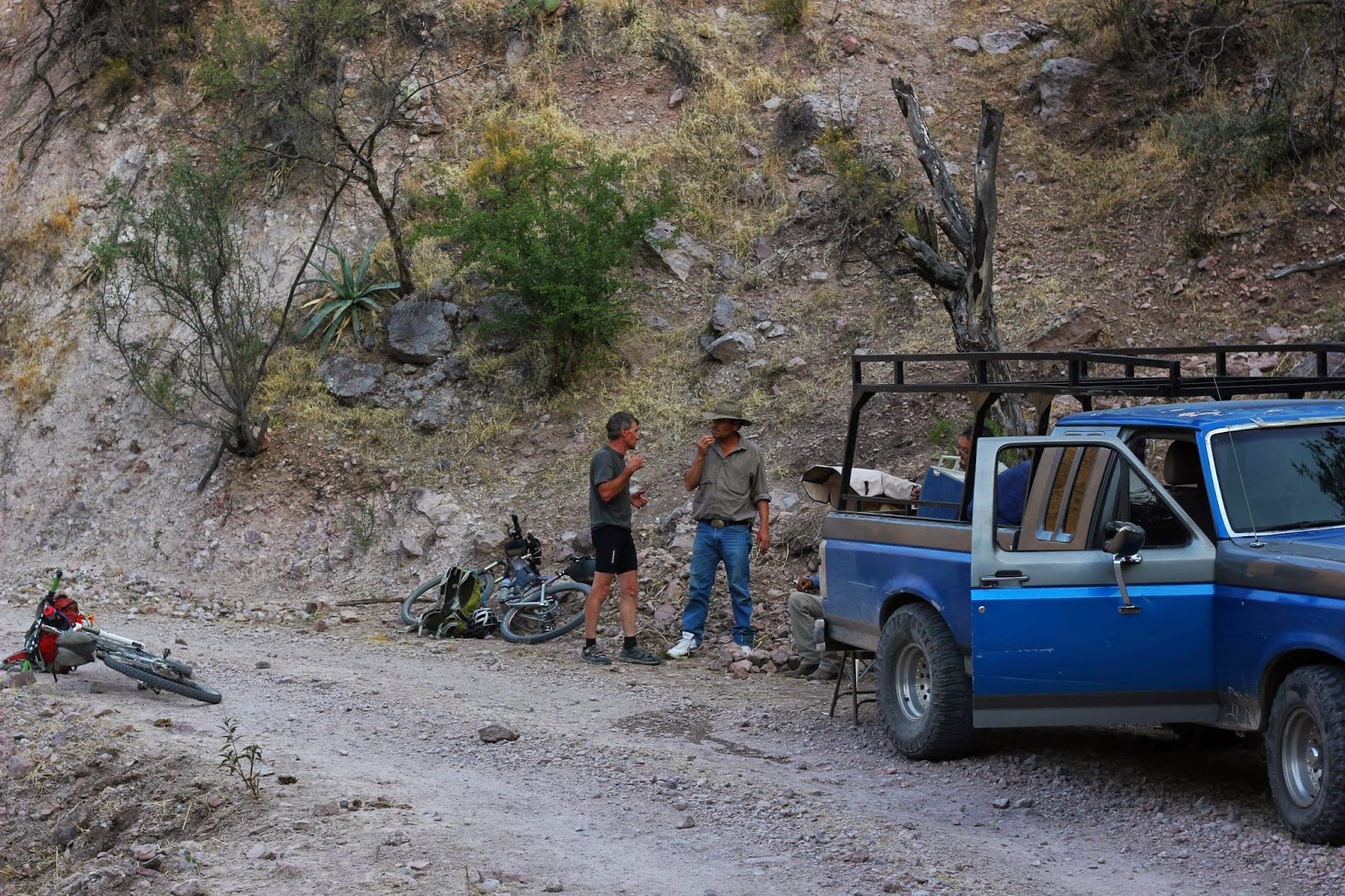 At one turn in the bend, we stumbled on my favorite encounter on the trip. There were three guys frying up some freshly caught fish, jamming to typical "banda" music, drinking tecate.

We could not help but stop and partake in the fish. 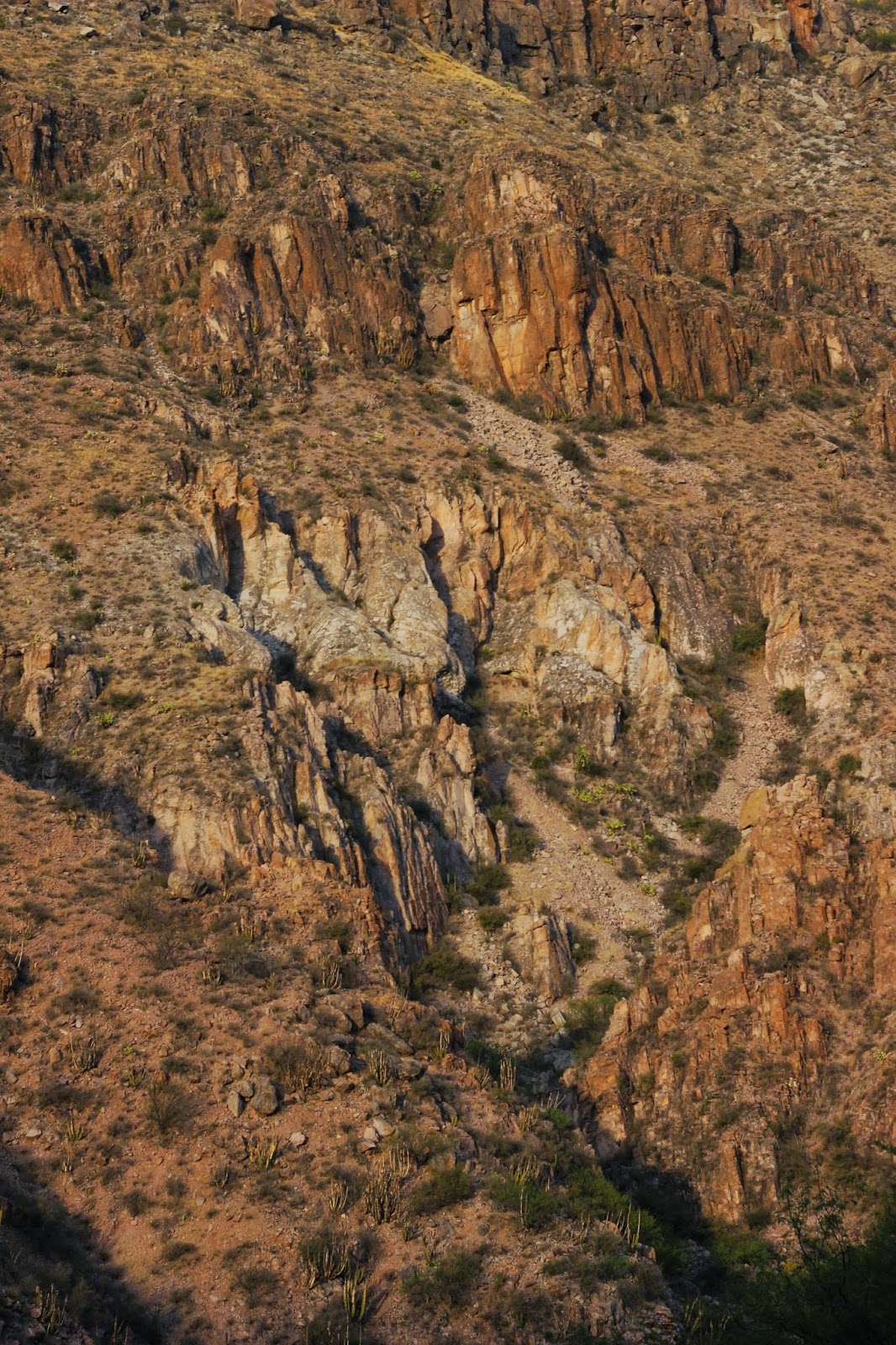 Our new friends had chosen to set up camp on the side of the road. Great view, but it had a dangerous drop off on one side.

The sun was setting, but the scene (both nature and our friends) were so unreal, we had to stay longer. 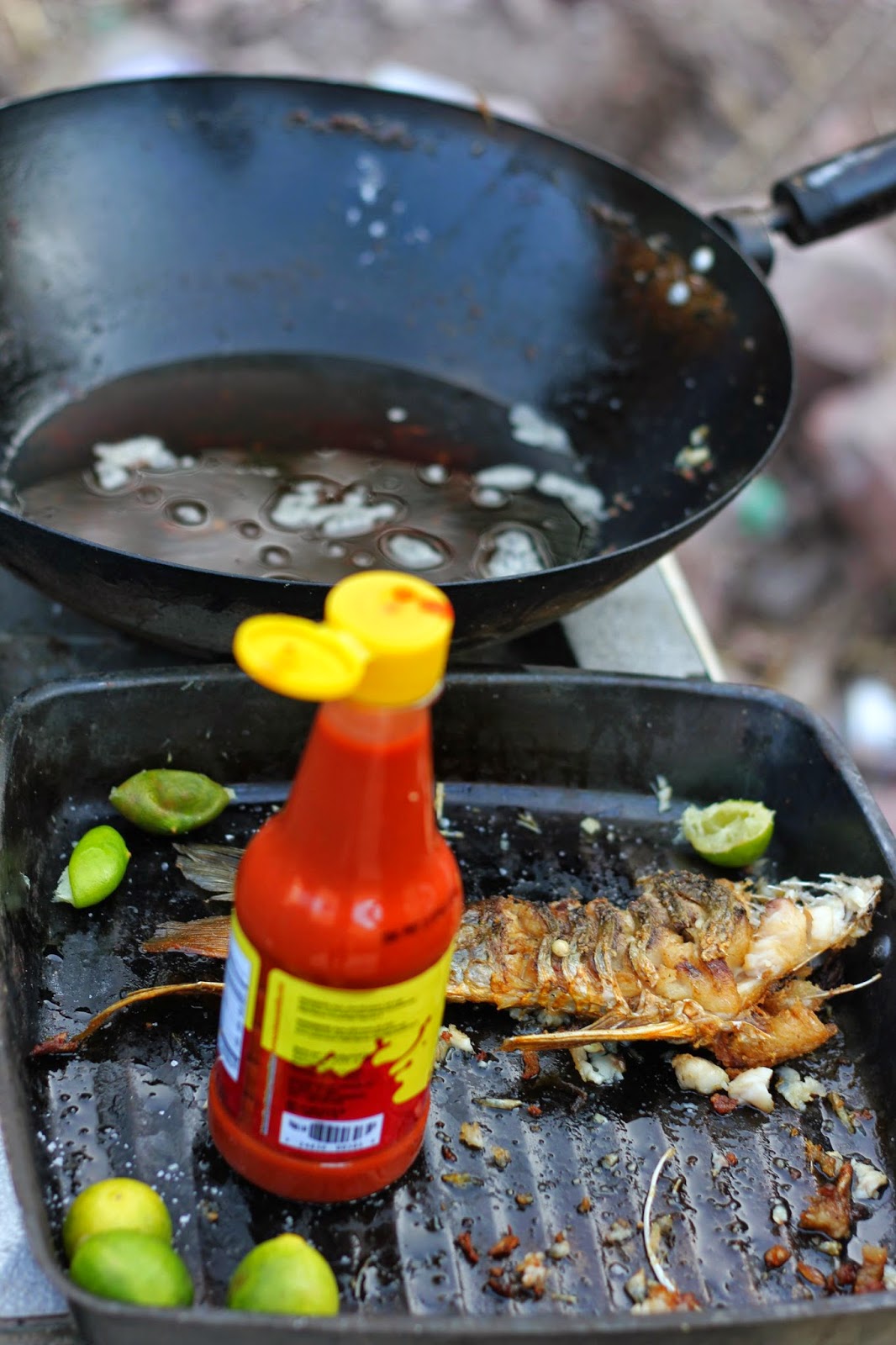 We chatted for about 20 minutes on the side of the road, eating fish and drinking Tecate Light. This is what Mexico is all about, this is the *real* Mexico that few people see.

I (as well as Lee) am a sucker for good coversation and good food. We left smiling and laughing at the thought having such an encounter on the side of a the road/cliff.

We continued on pass the ranch that Gilbert had recommeded, setting up camp in a wash. 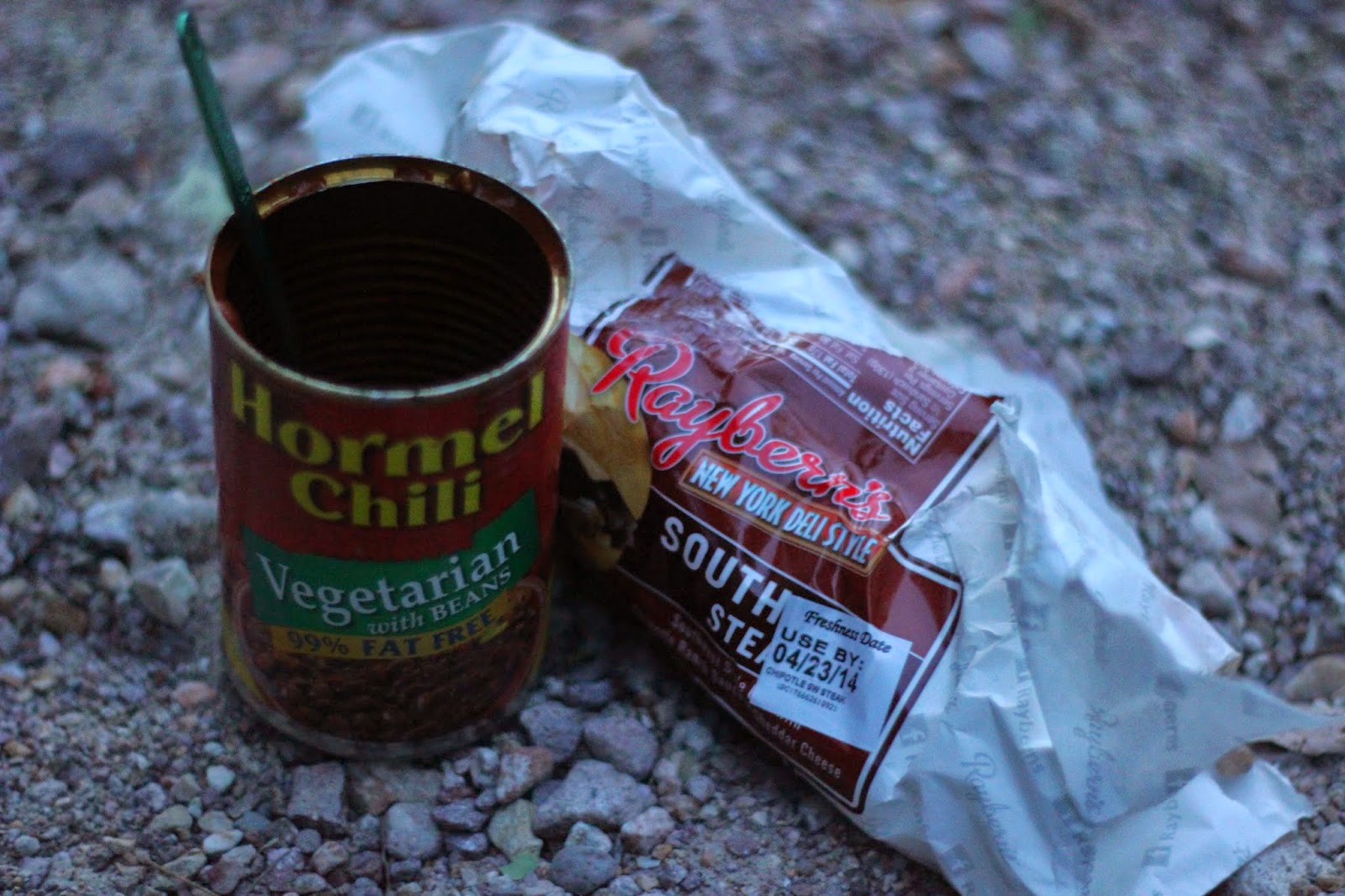 The next Don Miguel go-to item for endurance riding?
Next up, Day 2 and Day 3....

awesome Chad, can't wait for the next part. Really love your thoughts on Mexico.

Cool story and photos. Looking forward to the rest.

Great idea and write up so far. Like it. I wondered what the bike in the cattle guard pic a bit ago was about. like it.

The road definitely looks like it was hard to climb, but everyone pushed on and I'm really amazed with that. The ranch looks pretty cool, and the rancher seemed really hospitable. Glad you guys were met by a nice guy. I hope you enjoyed the journey. All the best! :)