The goal: to mountain bike 300 miles with 40,000 feet of climbing, in 3 days from Parker Canyon Lake to Superior (over Mt Lemon and over Mt Hopkins) 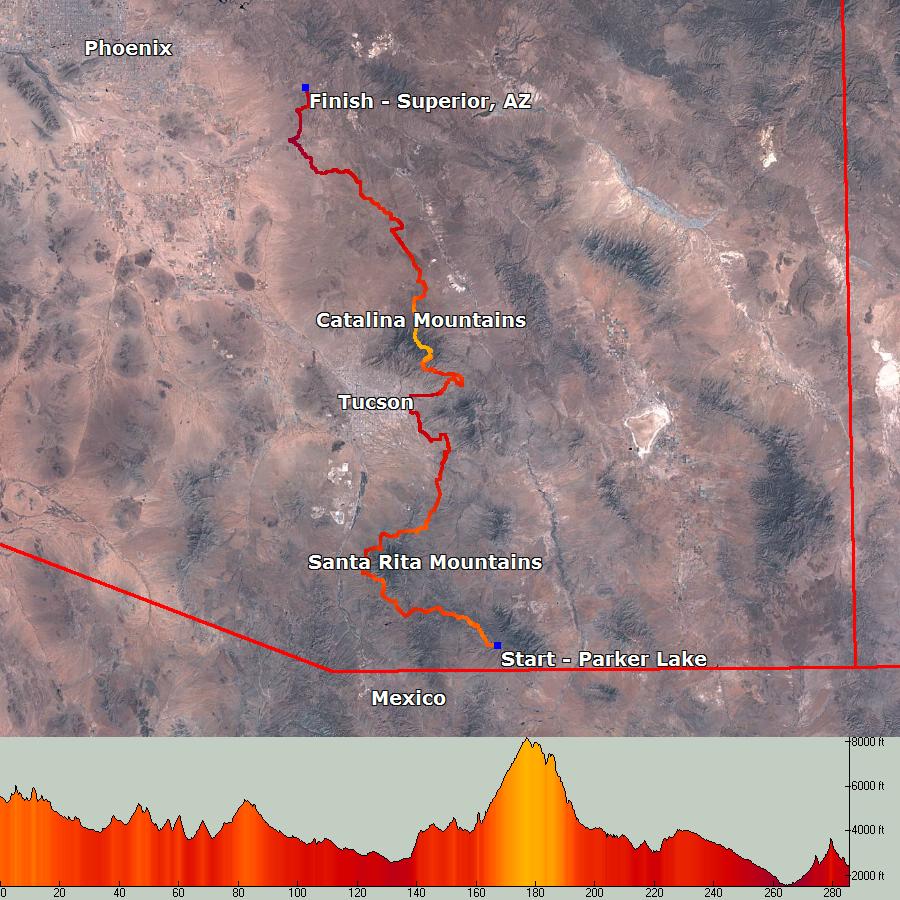 The report:
I showed up to the Parker Canyon Trailhead at about 8:00 a.m. last Friday having camped out the night before in the campground just minutes away. I was a little nervous packing since this was my first time doing an endurance race before.

I was aware that I was going to get tired of eating packets of GU and cliff bars so I managed to squeeze in some last minute whole grain frosted minnie wheats and OJ. I was hastily packing and eating to meet the 9:00 start time. Earlier that week, I had tried to put the track on my GPS. Having only put from Colossal Cave on, I figured I had to be behind someone.

We all took off (except Gavin, who I never saw again)

at 9:00 with some colder than expected weather and some sweet downhill sections. I got ahead of Tim, Zach, Lee and Scott (the “tour” riders) in the Canelo Hills. This dream of racing ahead quickly faded when I realized that my cue sheet was going to be bit harder to follow. I decided to continue to follow the tour riders until I felt comfortable.

That came for me when we hit Harshaw Road outside of Patagonia. As we hit the road, I think that Lee got a flat tire. I said goodbye to the gang, reset my GPS and headed off to Patagonia. In Patagonia, I stopped at a Famer’s Market to get some water. I still had half of a bagel in my bag, so I did not buy and food. I filled up all my bags (about 1.75 gallons worth) and headed off before seeing the others.

I rode to FS 143 passing the Patagonia Creek Preserve. Before coming to one of the smaller passes, I sat down to have an early lunch. I kept checking back hoping to see the tour riders. During the entire trip, I found myself looking back whenever I was eating or resting to see if there was another ride behind me.

I pressed on after eating some gel and my bagel. In this section, I passed about 5 vehicles that had been left for target practice. I got over the large pass just in time for an amazing sunset. I raced downhill in the last twilight hours and up towards Elephant Head. This was some of the hardest to follow using the cue sheets. I was lost for at least 30 minutes looking for the marker.

I managed to somehow get to Madera Canyon before lights and GPS started to fade. Turns out I forgot to switch the lights in my handle bar light and grabbed the wrong second pair of batteries from the GPS. Naturally, it seemed obvious to go towards the “lights” and get more batteries. I looked at the topo map and it seemed like the road to Green Valley was mostly flat. I took the chance of roading it to Green Valley with the hope of continuing on in the dark.

I bought some batteries, doughnuts, Gatorade and some water at the convenience store and began to retrace my steps. Midway through the Santa Rita Range, I decided to pull over for a “quick break.” It was about 1 a.m. Having ridden about 16 hours non-stop, my butt was a little sore and I my contacts were getting dry. I pulled my bag with emergency blanket out and crashed fast forgetting to set my alarm. That was okay, I was ready for bed just wasn’t ready to give in. I had a cold night. I brought a small fleece blanket and an emergency blanket (I put the later around the former to great a home-made, very, very lightweight sleeping bag). I slept on and off most of the night, glancing down at my watch periodically.I woke up to a hotter-than-expected morning at 730 a.m. I ate my doughnuts and rode the last flat, paved 4 miles to the Box Canyon (FS 62) turnoff.

As FS 62 begins to head up into the canyon after the bridge, I began to see one set of tracks in the dirt. I assumed that Scott had passed me the night before. However, when I got to the AZ Trail that intersects the FS 62, there were no trail marks. I remembered Scott mentioning that he would be doing some “off course scouting,” so I assumed those to be Scott’s. At the gate of the AZ Trail, I needed some tunes if I were going to crank this next section out. I found genre on my Ipod, “Rock Alternative.” I raced down towards Highway 83. Once on HGWY 83, I was trying to catch some roadies in front of me on the downhill sections. I eventually caught them and began drafting them until the Sahuarita Road turn-off.

I had a quick lunch at the I-10 culvert. I was really impressed with the single track after Cienega Creek. The only problem is that I was distracted by the huge, ugly castle in my vision. I kept asking myself, who would build such an ugly house. At the top of the pass, I raced down toward the ranch. My stomach was yelling “foooooood, fooooooood, feed me” as I read the cue that mentioned burritos and ice cream. I decided to continue instead of stopping for food. I saw few mountain bikers on this section of the trail.

Nearing the picnic area, I searched for the water spigot only to ask the scout group where it was. They showed it to me and I refilled two of my bottles trying to keep it light. I also decided to take a quick 5-minute rest. About 3 miles out of the picnic area, I finally had the GPS track in my system. I was excited. I loved the next section. I rode it as fast, determined to make it to Mt Lemon before the end of the day. I pressed on passing a few more bikes on the trail before jumping out at Old Spanish Trail. I stopped at Basha’s and Subway to refuel at about 4:30. Headed down Houghton, I was able to see Mt Lemon. I was anxious to see if I could get a picnic ground that night. I was at a little over 2500 feet when I started the pass and assumed that I had to get to at least 5500 feet to get to Molina Basin (the first campground on Mt Lemon)

I started up Redington with a nice foot-long, chicken teriyaki in my belly ready to use as energy. As I approached the halfway section of the first major climb, I stopped to take in the view. I van approached, stopped, and began to shoot paintballs at a sign about 200 yards away. I laughed because I knew I was next. I nonchalantly bent over picked up two rocks and waited from them. The guy in the passenger sign must have seen me since he rolled up his window, a sign of “truce” from the enemy. The girl driving pointed at him, like saying “I didn’t do it, he did.” Cars continue to pass me as I continued to the top. The entire time I could hear different rounds of guns being shot at different speeds. My peaking out at the top of Redington before sunset is nothing short of a miracle. I was determined to try to find a campground on Mt Lemon that might have some inviting people and even maybe a fire raging.

As I turned a corner, I could see the “firing range” and some kids (or what appeared to be kids) shooting off their guns. Right before dropping right into the Italian Spring Trail, a group of college guys asked me if I had seen four cars. I said “no” and mentioned the Bellota Spring Road. I also took this time to on my headlamp. Passing the gate of Redington Road, I saw some pretty big eyes glowing in the distance. I grabbed my knife out of my seat bag and put it in my pocket. About 30 minutes down the trail, I heard more shooting, this time it seemed to be louder. I saw some light in the distance. I thought it might be some hikers, but it was off on the forest road. As I passed, a few of them shouted something at me that I could not understand.

At the pond (near the wash), I stopped to change my GPS batteries. While I was fumbling for batteries, I realized that my seat bag was still open. As I looked inside, I realized that my pump had fallen out. That was very disappointing. Without my pump, I felt alone, very alone. More bullets being fired in the background. I continued on thinking about what I would do if I got a flat tire. I put more layers on as I went through the cold washes, hoping to make it to Molina Basin

Next, I started the hike-a-bike section below Molina Basin. Slowly, I inched forward. I constantly looked at my GPS to see if I was close to the pass. It was about 10:00 when I got to the top of the pass. I saw a campfire and lights at Molina Basin! I raced down the single track hoping to warm up in front of the fire. As I came to the picnic area, I was disappointed to find that the “campfire” was the entrance light and the other “lights” was only the place to pay. Everyone is camp was sleeping.

Anxious to find some people at Prison Camp, I took the Catalina Highway. I had no luck. I stopped and hydrated for about 10 minutes. I tried to eat food since I was hungry, but for some reason I had a hard time stuffing down a small cliff bar. I decided to press on and try my luck at Palisades. It was too cold for me to stop and sleep. The highway was long and steep. During the ride, I thought about the backside of Mt Lemon, having no pump, and the temperature, the downed trees, and hike-a-bike sections. I decided I needed some music to stem my fears. Also, I decided to put my watch away so I did not have to worry about the time. I got to Palisades a little after 3:00 a.m. on Sunday morning. I pulled out my fleece bag and emergency blanket, made some padding with some needles and leaves and laid down. I tried to go to sleep, but I was waking up every few minutes to some cold air. I was cold and miserable. I pondered the next section of the trail. At about 430 I got up, packed, remounted and headed home. I was not going to be able to finish this race in this mental state.

It was a very cold ride down the mountain. After Molino Basin and the pay station, the sunrise coincided with a small sliver of the moon showing over Redington. It was the perfect ending to a great epic. I got some coffee at Circle K, asking the clerk if I could stay inside for awhile and warm up. I headed on the Rillito Bike path to my house and arrived today at 8:00am.