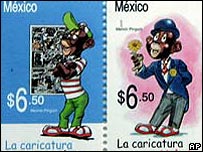 Black activists in the U.S., such as Jesse Jackson and Al Sharpton, who were already sore at Mexico's government after President Fox made an insensitive remark about U.S. blacks last month, have condemned the stamps as racist and offensive. The White House also issued a statement condemning the stamps, and activists in the small black community on southern Mexico have expressed indignation as well.

The Mexican government and media, on the other hand, have leapt to the defense of the stamps. "Memin Penguin is part of our culture," is the basic argument, and so, since the stamps are merely celebrating a part of Mexican history and culture, they are acceptable. The Mexican people seem to agree, and have flocked to buy the stamps. They sold out in two days.

While you certainly have to question the wisdom of a government that would issue a stamp that clearly was going to cause a controversy, one thing this government is very adept at is exploiting disagreements with the United States. So this week, we saw Foreign Minister Luis Derbez, Presidential Spokesman Ruben Aguilar, and even President Fox, speaking passionately in defense of poor little Memin Pinguin. Complaints against the stamp from the U.S. are blatant attacks on our culture, they told the Mexican public.

For a government that has offered little to the Mexican people and, as a result, doesn't have a heck of a lot of support here, resentment against the U.S. is always rich material for rallying the common man to their cause. And in the week leading up to an event celebrating the 5-year celebration of Fox's election, what better way to get people on your side than to lash out at attacks from the U.S.? The "cultural " angle is a very good one as well, for as Mexicans find their country more and more overwhelmed with U.S. fast food restaurants, Wal-Mart stores and Hollywood movies, they are very sensitive to issues of cultural imperialism from the north.

But unfortunately, as the government and the Mexican media (which often tends toward sensationalism) have turned the controversy into a purely cultural conflict, the issue as to whether the stamp might actually be offensive to black people has been essentially ignored. People have been so quick to dig in their heels to defend Memin Penguin and their culture, they seem entirely unwilling to even consider that the image, while acceptable in the 1940s, is offensive to many in 2005. Even Elena Poniatowska, one of the nation's most acclaimed authors and left-leaning intellectuals, spoke out in defense of the stamp. I saw a quote from her this week saying that images like Memin and a popular folk song called something like "Little Black Watermelon Boy," are, in fact, demonstrations of the affection that Mexicans feel for black people. The only public condemnation I have seen of the stamps came from the leftist newspaper La Jornada, but they were criticizing the Fox government for causing an unnecessary diplomatic row rather than criticizing the wisdom of reproducing and celebrating outdated and insensitive imagery.

When I have talked to people I know about the stamp, the responses I get are: "Memin Pinguin is part of our culture," "He was created in the 1940s, and so he reflects the norms of that period," "Memin is an adorable character, not a villain in any way, so how is he offensive to blacks?" and, "Who are Americans to criticize us when they're the ones whose culture is racist?"

I've also seen a couple of TV news reports where they've interviewed people on the street or in line at the post office about the stamp controversy. "Of course the stamp isn't racist, Memin Pinguin is an adorable character that all Mexicans love," is the usual comment. Funny that I haven't seen any news reporters venturing into the black Mexican communities in Veracruz, Oaxaca or Guerrero to get their perspective.

And that's the argument I keep hearing here: "Memin Penguin doesn't offend me, so therefore he's not offensive. You who are offended are at fault for your misinterpretation." In fact, that's essentially the argument Fox made last month after his comment that Mexicans in the U.S. "do the jobs that not even blacks will do." No, said Fox, the statement was not racist, and it's really too bad that the African-American community interpreted it as such.

Mexicans laugh at Americans sometimes for their ultra-sensitivity. And yeah, extreme PC-ism deserves to made fun of. But I'm not sure if a total lack of concern for sensitivity -- like calling overweight people "fatty" or referring to handicapped people as "minusvalidos," or "less valids" -- is any better. Seems like there should be a happy medium out there somewhere.

And yeah, I can understand why Mexicans would get a kick out of something that winds up the gringos so much. But at the same time, they should remember that it's not just the U.S. that is viewing these stamps; the rest of the world is seeing them now thanks to this controversy. And I don't think that Memin Pinguin is going to do much to improve the world's view of Mexico.

how can you think that someone is wrong for thinking something is offensive?

I am a dominican studying in mexico and if anyone were to ask me whether i found the character offensive my answer would be a big Yes. The worse thing is that i find that mexicans live comfortablly in ignorance. One has to live in mexico to understand. I walk around and all eyes are on me, like as if they have never seen a black person before. The magazines are indeed offensive but if you are not black or concerned about racial issues you would not get it. Many mexicans still believe that it is ok to use the word negro to call out a black person when there are alternative words such as moreno which is less offensive. Back to the memin character. He is called little negro to his face and that song little black watermelon boy, come on how much more offensive can you get. I cannot wait to finish my studies to get out of this place.

Oh come on! What about Speedy Gonzalez?